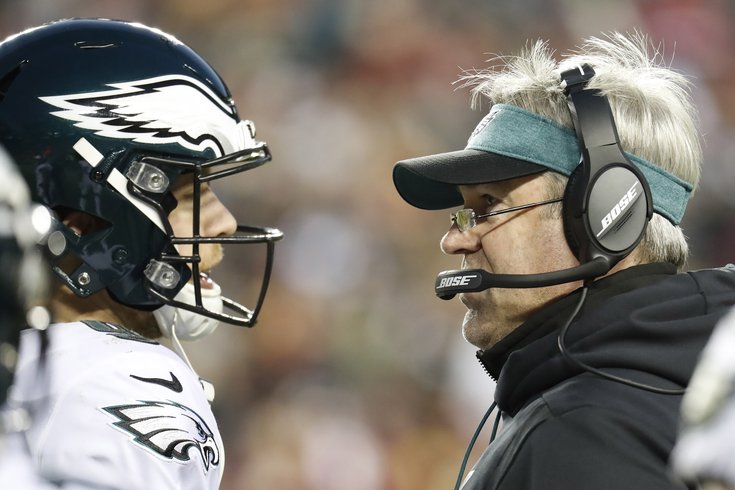 BDN and Crusher Doug head into the playoffs with a clean slate.

Holy crap. I mean, holy crap! After what often felt like an abomination of a season, the 2018 Philadelphia Eagles have a clean slate and are headed to the playoffs. They took care of business on their end, beating the hapless Washington Redskins, and got some help from the Chicago Bears, who beat the Minnesota Vikings, the team standing in the way of the Eagles' playoff hopes.

Way back in 2008, the Eagles needed a litany of thing to go their way in order to make the playoffs. They needed the Houston Texans to beat the Chicago Bears and the Oakland Raiders to beat the Tampa Bay Buccaneers, both of which were unlikely results, coupled with a win of their own over the Dallas Cowboys. And, as you all recall, it all happened, culminating with an Eagles 44-6 smackdown of the Cowboys.

The Eagles' matchup wasn't quite the same as that day, but the Eagles were just as dominant against a completely over-matched and injury-plagued Redskins team.

2) The 'You'll Get Nothing And Like It' Award: The Redskins' offense

The Redskins' offense had just 89 yards, eight first downs, they were 0-for-9 on third down, and they held the ball for a measly 16:41. Oh, and they had zero points.

3) The 'Thank You' Award: The Chicago Bears

The Bears shut down the Vikings' offense during the first half of their game, and when they went into the locker room at halftime, the Los Angeles Rams held a 28-3 lead over the San Francisco 49ers.

It would have been very easy for the Bears to realize how crappy the Vikings are, see that the No. 2 seed was almost certainly off the table due to the early results of the Rams-Niners game, and pulled their starters.

But, credit the Bears for playing to win the game, which they did. Emphatically.

4) The 'Own Your Soul' Award: The Vikings

• 9/3/16: Vikings trade first- and fourth-round picks to the Eagles for Sam Bradford: Many believed the Vikings were Super Bowl contenders in 2016 before losing starting quarterback Teddy Bridgewater for the season with a gruesome knee injury. The answer to that problem? Trading for a rickety quarterback with no more than seven wins in any one season to learn the playbook in a week and lead them to a Super Bowl! Lol.

Bradford proceeded to actually break the record for highest completion percentage in a single season in NFL history, while also only barely topping seven yards per pass attempt (7.02), which was 19th in the NFL. The combination of those two things feels impossible, but he was by far the most risk-averse quarterback in the NFL, which might make for decent stats in some metrics, but ultimately doesn't win games.

Anyway, the Vikings' OL suffered some injuries, Bradford couldn't carry the team, and yada yada yada, that first round pick ended up being much higher than the Vikings envisioned.

• 10/23/16: The Eagles pummel Sam Bradford for four quarters in 21-10 win: The Vikings headed into Philadelphia with a 5-0 record, but the Eagles beat up on Bradford, sacking him 6 times in that game, forcing three Bradford turnovers in what ended up being the Vikings' first loss of the season. Minny would go 3-8 after that 5-0 start.

• 3/3/17: Eagles win coin toss for the 14th overall pick: The Vikings had the same record as the Indianapolis Colts at 8-8 to close the 2016 regular season, and both teams finished with a strength of schedule of 0.492. The next tie-breaker for who gets the higher draft pick for teams in opposite conferences is, of course, a coin toss. Rather than just have the Eagles and Colts flip for it, for some dumb reason the coin had the Vikings' logo instead of the Eagles' logo, and the NFL made Vikings GM Rick Spielman join the Eagles and Colts on the stage at the NFL Combine for the flip.

Spielman had to watch as the Eagles won the toss, complete with Howie Roseman pumping his fists, adding insult to injury after being robbed of a first round pick.

• 4/27/17: Eagles draft DE Derek Barnett: That first round pick from the Vikings became Derek Barnett, who had a very good rookie season for the Eagles, and looks like a legitimate starting DE in the NFL. Worse, Barnett came back to haunt the Vikings in the NFC Championship Game, when he had a huge strip sack of Case Keenum before the game turned into a blowout. With the Vikings knocking on the door in the Eagles' red zone, at a time when they were still very much in the game, Barnett made his big play.

Anyway, some Vikings fans were treated harshly, and in some cases Eagles fans definitely stepped over the line (throwing beer cans, for example), but the overreaction/embellishment by Vikings fans was hilarious.

Among those suffering hardships during the NFC Championship Game was a gentleman by the name of Eric Johnson, who was allegedly mistreated by Philadelphia police, per a report from Mike McFeely of the Fargo Forum.

He arrived at Lincoln Financial Field about 3 p.m. When the Uber driver stopped in a busy area, Johnson opened the car door and tried to get out. But a Philadelphia cop slammed the door on his leg and said, "You can't get out here!" Johnson tried to get out again, but the officer slammed the door on his leg a second time and angrily yelled at him. Johnson said he and the passengers he shared the Uber ride with were confused, and one of them left their cell phone in the back of the car because of it.

PhillyVoice is still awaiting word from the NFL on whether or not Johnson's shoes fell off as well.

The following week, Vikings fans upset with treatment of their brethren who attended the game in Philly hatched a genius plan to sign up as Uber or Lyft drivers, dropping off Eagles fans in wrong locations the week of the Super Bowl, which was being held in Minneapolis. (To note, this diabolical plan did not actually happen, as far as I'm aware.)

• 1/21/18 (the actual game): The Eagles smoke the Vikings 38-7: The disrespect some Vikings fans experienced in the parking lot that day paled in comparison to the beatdown the team received inside the stadium. After Nick Foles went 26/33 for 352 yards, 3 TD, and 0 INT against the "No. 1 defense in the NFL," Eagles fans decided to steal the Vikings Skol chant, changing "Skol" to "Foles."

• 12/30/18: And finally, in a "win and in" situation, the Vikings choked against the Bears: You know, opening the door for the Eagles to steal the last wildcard spot away from them.

Yes, the Eagles own the Vikings' soul.

5) The 'I'm Not Done Making Fun of the Vikings Yet' Award: Me

The following video of Kirk Cousins is going to be played endlessly, as it should:

Seriously, I don't know how Adam Thielen didn't knock him out. Also there's this:

Kirk Cousins is now 5-25 against teams with a winning record. pic.twitter.com/mVzRx25T2l

Three years, $84 million, fully guaranteed. What in the world is Nick Foles going to fetch on the open market this offseason? Good Lord.

Cox had three sacks, bringing his total for the season to 10.5. Playing alongside defensive tackles who missed extensive time this season, Cox has had to play an inordinate number of snaps for an interior defensive lineman, and he stepped up all season long. This was probably his most dominant game in what was probably his best season.

8) The 'Home Away From Home' Award: Eagles fans

There were far more Eagles fans in attendance for this game than Redskins fans, and in my opinion, it wasn't very close. The same was true of the Eagles' games last year, mostly notably against the Chargers, Rams, and Giants. Eagles fans brought a lot of energy, and often some humor, as "LET'S - GO - BEARS" chants filled the stadium at times when the Bears-Vikings score appeared on the jumbotron.

Of course, there's the question of whether or not Foles will play next weekend after leaving the game on Sunday with a chest injury. After the game, Foles acknowledged he is sore, but would find out more on Monday. If he can't go, it's a good thing Nate Sudfeld has a 129.2 passer rating on the season. Oh, and Carson Wentz is just still kind of, there, lingering, not on IR. We'll see...

10) The 'We're Not Friends Anymore' Award: The Bears

And with the Eagles now playoff-bound because the Bears helped them get in, Eagles fans can now turn their attention toward hating the Birds' first round playoff opponent... the Bears!