After the national anthem during Saturday's Cotton Bowl, Clark took a detour 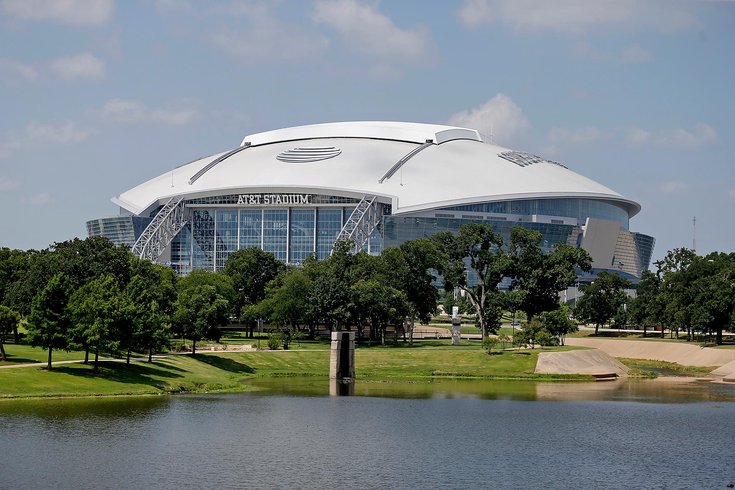 A bald eagle flew during the national anthem and landed on a Philadelphia Eagles' fan during the Cotton Bowl on Saturday in AT&T Stadium in Arlington, Texas.

A bald eagle mascot flew off course during the Cotton Bowl's national anthem on Saturday, but managed to find a friend in the stands.

The eagle, named Clark, was supposed to leave his handler and fly to a landing spot on the opposite side of AT&T Stadium in Arlington, Texas during the pre-show of the Clemson and Notre Dame semifinal.

Instead, Clark took a little detour to see a familiar face: None other than a Philadelphia Eagles' fan.

His name is Tuyen Nguyen, according to ESPN, and he's a carpenter for Notre Dame. He moved to South Bend, Indiana in 1979 after immigrating from Vietnam with his sister in the aftermath of the Vietnam War. But before he settled in Indiana, he made a quick stop in Philadelphia, where he fell in love with the city and, most importantly, the sports teams.

"Oh, by the way, I'm a big-time Philadelphia Eagles fan," Nguyen told ESPN. "And the eagle landed on me at the Cowboys' stadium. How's that?"

We found the Notre Dame fan the eagle landed on!

Clark landed on Nguyen's outstretched arm after the bird flew around the covered stadium after the national anthem. He landed on one other Notre Dame fan in a kelly green T-shirt before he sensed there was someone like him in the stands.

Nguyen said he was hoping the bird would land on him. Clark remained perched there for several  minutes, posing for pictures and videos, before his handlers managed to get ahold of him.

The eagle landed all right. On a Notre Dame fan. pic.twitter.com/6koNTfitvm

It's an Eagles miracle. Let's hope that magic carries into this afternoon's game.