What you need to know about the 2019 Mummers Parade 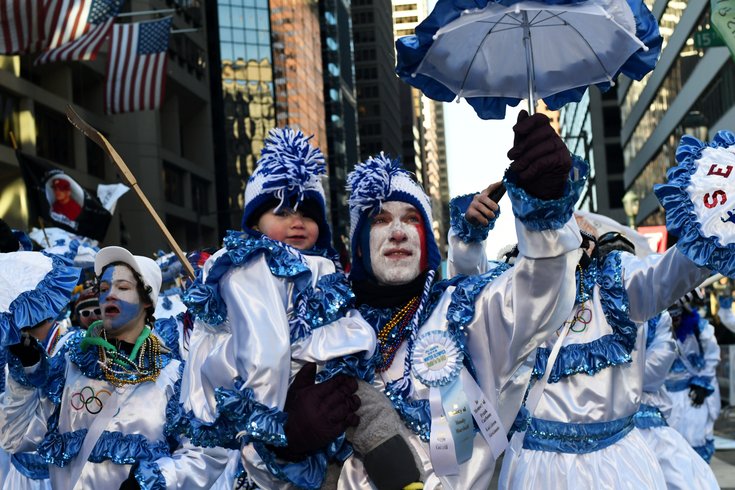 A marcher holds a young child early in the 117th annual Mummers Parade in Philadelphia on Monday morning.

It's not a proper New Year's Day celebration without the Mummers Parade in Philadelphia.

The Mummers have been strutting for almost 120 years, so it's safe to assume we all know the drill by now. But here are all the Gritty (heh!) details of the 2019 Mummers Parade that you'll need to know if you're from out of town or just need a refresher.

The parade begins at 9 a.m. at 15th and Market streets, winds around City Hall and spits back out onto Broad Street, where it will head south until Washington Avenue. It's the same route as last year, which added a performance area at Broad and Pine streets.

Here's everything else you need to know. 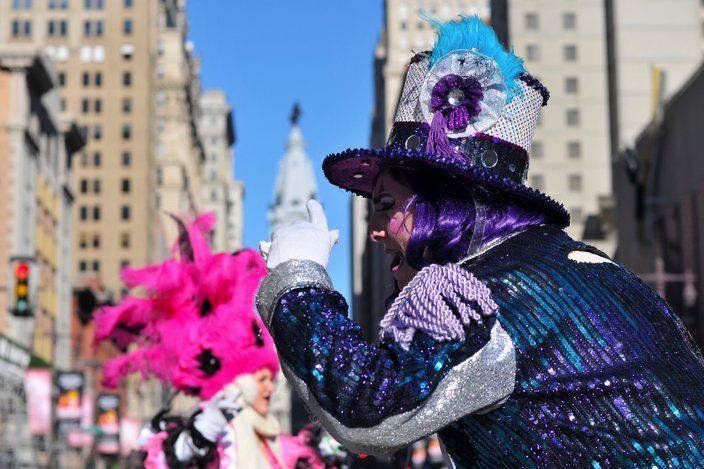 Mummers strut on South Broad Street to ring in the new year at the 117th annual Mummers Parade on Monday, Jan. 1, 2018.

Again, the 2019 Mummers Parade route is the same as last year. It cruises down Broad until Washington, and then mumming will continue on Second Street from Washington to Mifflin Street for the unofficial 2nd Street Strut festivities.

These are the four performance areas along with which brigade will be performing at each stop:

The Fancy Brigades also will be performing at the Pennsylvania Convention Center as part of the four-day Mummers Fest, which begins Friday, Dec. 28. The performances on New Year's Day are at 11:30 a.m. and 5 p.m.

Note: These events are inside. You can get tickets here.

Mr Mummer created this handy map with the parade route and surrounding amenities.

If you aren't going to make it out for the celebration and want to stream the show, here's when each club will be strutting.

If you're in the area, PHL17 will televise the 2019 Mummer Parade. If you're an out-of-towner, you can stream the parade online at Mr. Mummer. Coverage begins at 9 a.m.

This the weather forecast from the National Weather Service for New Year's Eve and New Year's Day.

Monday: Rain will begin after 11 a.m. Cloudy with patchy fog; high temperature near 51 degrees.
Monday Night: Rain continues and could be heavy at times. Low around 45.
Tuesday: Partly sunny and breezy with a high near 61 degrees.
Tuesday Night: Partly cloudy, with a low temperature around 37. 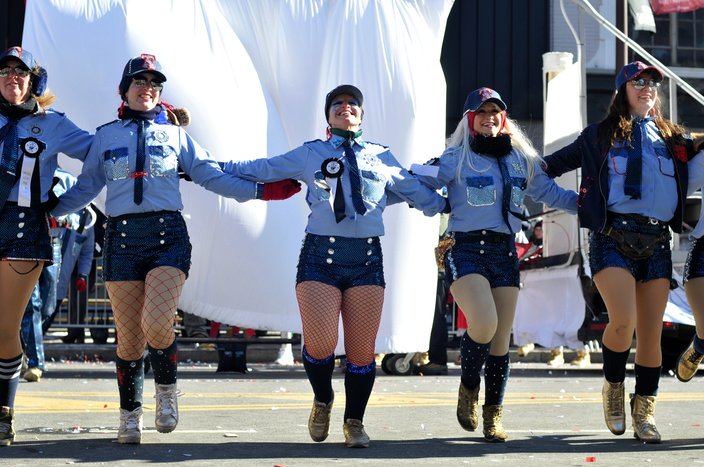 Mummers strut on South Broad Street to ring in the new year at the 117th annual Mummers Parade on Monday, Jan. 1, 2018.

If you're coming to the 2019 Mummers Parade from New Jersey or the 'burbs, driving is not recommended because of all the Center City road closures. SEPTA is your best bet. You won't have to worry about coming home too late because there will be late-night service and everything will operate on a Sunday schedule. Here's more.

Friday, Dec. 28
Two eastbound travel lanes on 15th Street will be closed from JFK Blvd. to Market Street from 10:00 a.m. to 12:00 p.m. for equipment load-in. 15th Street may be closed completely for short intervals during this time frame if necessary.

Parking is prohibited from 2 a.m. on Dec. 28 through 7 a.m. on Jan. 2, on the west side of 15th Street from JFK Blvd. to Market and Market to Ranstead Street.

Saturday, Dec. 29 and Sunday, Dec. 30
Two east travel lanes on 15th Street from JFK Boulevard. to South Penn Square will be closed for television compound setup starting at 10 a.m. on Dec. 29. Closure to remain in place until 12 p.m. on Jan. 2.

From 7 a.m. until the parade conclusion, Broad Street from South Penn Square (parade route) and Washington Avenue from 12th Street to 18th Street (dispersal area) will be closed.

Vehicular traffic will not be permitted to cross Broad Street while the 2019 Mummers Parade is in progress. Delays can be expected during the course of the event. Motorists are advised to avoid the area by using alternate routes and allow for extra driving time in areas near the event. Please refrain from double-parking, which creates congestion, limits traffic flow and is illegal.

GETTING A GOOD VIEW 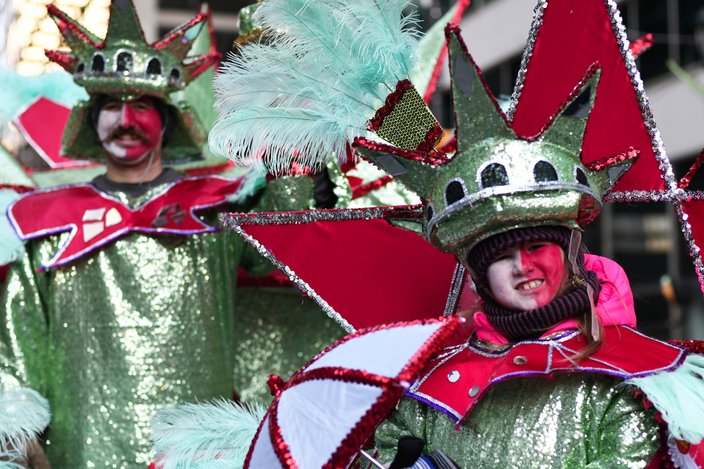 Members of Golden Sunrise are first to strut on South Board Street during the 2018 Mummers Parade, Jan. 1, 2018.

Your biggest responsibility during the Mummers Parade is deciding where to stand. Center City can get pretty crowded, as many people get there early to set up chairs of their own, especially near Walnut and Chestnut streets. Usually the further south you go, the less crowded it gets.

And if you so wish, you can purchase bleacher seating at the Independence Visitor Center for $20 ahead of time. Here's more.

Oh, and bathrooms will be dispersed along the route.

The 2019 Mummers Parade officially ends at 5 p.m. on Washington Avenue but as soon as the sun goes down expect for the party to continue down in South Philly at 2nd Street ... aka "Two Street."

There's more unofficial judging, some more drills from each club, food trucks, and parking is blocked off in a ton of areas so you can hangout in the street with your party.

Here's the map of that route, restroom locations, street closures, and food vendors from last year.