The Philadelphia Eagles came into a Seattle to face a highly accomplished Seahawks team with a chance to put away a team that has owned them in recent years. And then ... (fart noise) ... Seahawks 24, Eagles 10.

For all the superlatives of the Eagles' season so far, after one slip-up, they have temporarily lost home-field advantage. Earlier this week, we explained that the Vikings would hold the tiebreaker advantage over the Eagles with a Vikings win and an Eagles loss.

We'll re-explain. You have to go several tiebreakers deep to get there:

• The first tiebreaker would be head-to-head: The Eagles and Vikings did not, and will not, play each other during the regular season. Next.

• The second tiebreaker is conference record: The Eagles and Vikings are both 8-1. Next.

2) The Bully Award: The Seahawks

The Eagles came into this matchup as 'the best team in the NFL,' ready to surpass the big bad Seahawks, who have made a habit over the last half-decade of bullying other NFC teams. Instead, the Eagles were timid, and the Seahawks remained the bully.

3) The 'Off His Game' Award: Carson Wentz

Carson Wentz made some terrific plays, as he always does, but the biggest play in this game, by far, was Wentz's fumble at the goal line, which resulted in a Seattle touchback. A score on that drive would have tied the game. Instead, the Seahawks capitalized with a touchdown on the ensuing drive and went up by 14.

Wentz also missed two major opportunities on throws to Nelson Agholor. The first was an overthrow early in the game that might have been a touchdown with an accurate pass. The other was actually a 30-plus yard completion, that also could have gone for a touchdown, but poor placement on the throw did not allow Agholor to get yards after the catch.

Wentz is an MVP candidate, and the stat sheet will show that he threw for 348 yards, but this was not his best game.

4) The Slop Award: The Eagles (team-wide)

A week ago against the Chicago Bears, the Eagles had four fumbles (they lost three), and committed 11 penalties. Because they were playing the craptastic Bears, they still won by 28. Against the Seahawks, the Eagles committed too many penalties in big moments, and lost the turnover battle 0-2. Granted, some of those penalties were of the ticky-tack variety, but there were some absolutely legitimate ones in there as well.

If you make mistakes against teams like the Bears, you can still win. Against the Seahawks? Not so much.

Russell Wilson is a lot like Aaron Rodgers, in that he can mask roster deficiencies and win ballgames on his own. He is one hell of a quarterback, who was at the top of his game Sunday night.

Brace yourselves for some awful Doug Pederson hot takes this week, because they are coming. Like Wentz, Pederson did not have his best game, but it wasn't exactly an abomination either. Pederson was presented with about a half-dozen interesting decisions, whether they be on fourth down or challenge opportunities.

Personally, I agreed with some, disagreed with others. We'll get to an analysis of all of that on Monday. But brace yourself with hot, smoldering lava commentary of Pederson's awfulness. 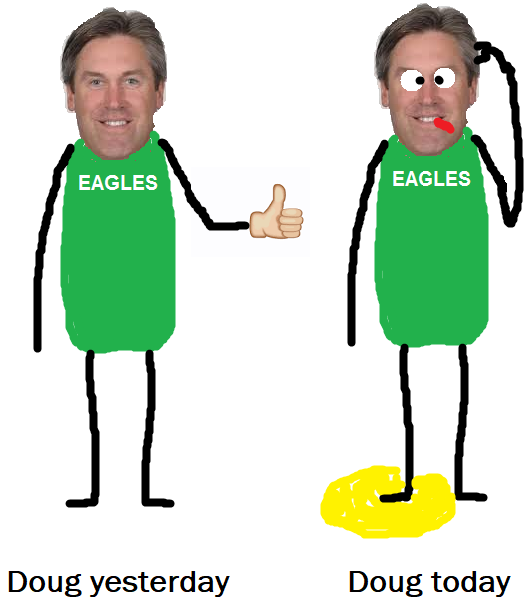 On unlucky Week 13, nothing went the Eagles' way around the rest of the league. Like, nothing.

As we noted above, with the Eagles' loss and the Vikings' win, Minnesota currently has home-field advantage bragging rights on a tiebreaker with the Eagles.

If the Eagles lose to the Los Angeles Rams next week, they will also no longer control their destiny for a first-round bye.

9) The 'Bounce Back' Award: Nelson Agholor

Last season in Seattle, Agholor had his worst game as a pro, when he was called for an illegal formation penalty that negated a long TD pass to Zach Ertz, and then had a horrific dropped pass that should have been a big play immediately thereafter.

One season later, Agholor had 7 catches for 141 yards and a TD. His turnaround in one season has been remarkable.

When your Cowboys fan friend texts you that Wentz sucks or that the Eagles are frauds, gently remind him or her that the Cowboys needed the Eagles to win this game, as the Cowboys are now chasing the Seahawks for the wild-card, not the Eagles for the division.

Does that ease your pain at all? No? OK, well I tried.