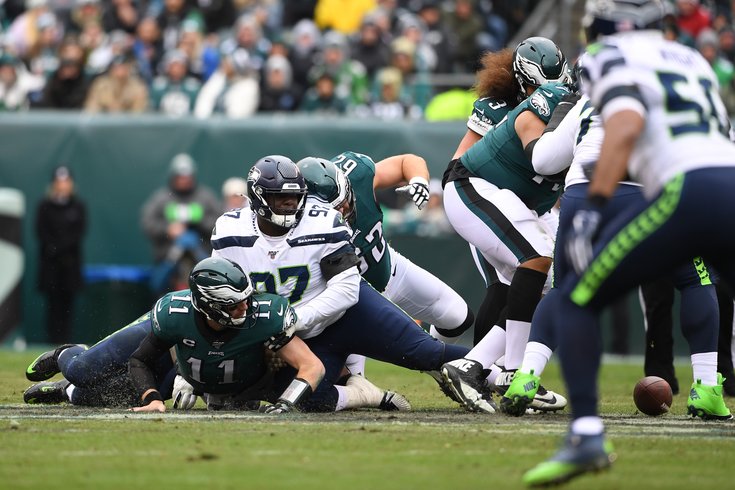 Carson Wentz is going to come under heavy fire from the Philly faithful over the next week.

For the second straight week, the Philadelphia Eagles had a chance to win a game at home against a good opponent, but their offense was woefully inept, leading to an often unwatchable product on the field that produced yet another frustrating loss.

Throughout the first 10 games of the season, the biggest reason for the Eagles' struggles offensively, by far, were the wide receivers. Wentz put the Eagles in a good enough positions to win several games, but drops in extremely high-leverage situations turned potential wins into defeats.

On Sunday against the Seahawks, there are no excuses to be made for Wentz. He was quite clearly the biggest reason for the team's loss, as he played his worst game of his career. He wasn't poised, he was inaccurate, and worst of all, he was careless with the football, fumbling three times (four if you include the two-point conversion), losing two. On the day, he had four total turnovers.

To add injury to insult, Wentz also hurt his hand on one of the lost fumbles, and although x-rays came back negative, he left the locker room with his hand heavily wrapped (artist's rendition to the right).

Of course, while Wentz was indeed very bad, the receivers were also a big story, really before the game even started. When Alshon Jeffery and Nelson Agholor were ruled out (and with DeSean Jackson already done for the rest of the regular season), the Eagles were down to the following quartet at WR:

Their combined numbers on the season heading into this matchup: 35 targets, 14 catches, 174 yards, 0 TD.

In fact (repeat joke alert), if you combined all of the Eagles' active wide receivers today into one person (we'll call him J. JorMack Wardcega-Matthins), he would have entered Week 12 ranking 182nd in the NFL in receptions, 157th in receiving yards, and trailing 212 guys in TD catches. 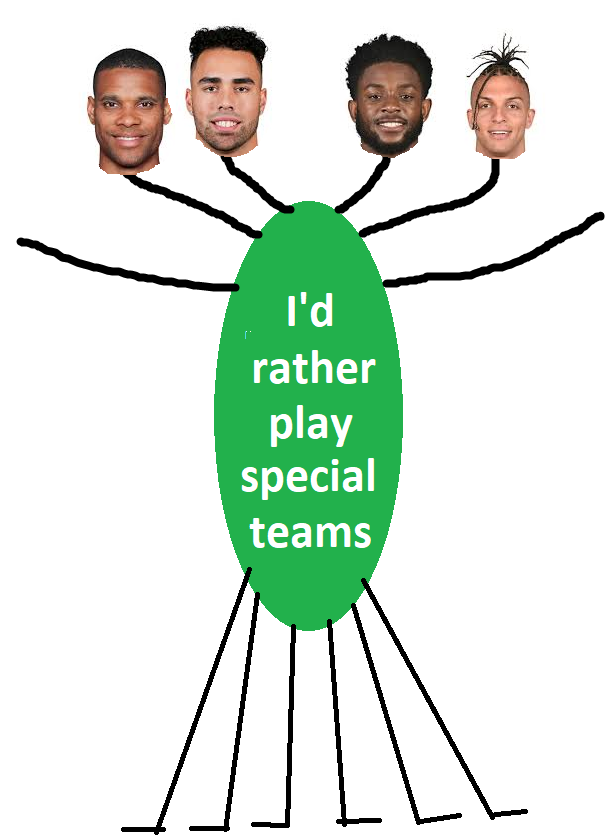 Ward had six receptions, and Arcega-Whiteside made a really nice catch in garbage time, but the Seahawks didn't respect the Eagles' receivers at all, as they constantly packed the box with defenders.

The Eagles' biggest offseason need — with a chasm in between the biggest need and the second-biggest need — is wide receiver.

The receivers get so much (deserved) heat that Dallas Goedert's disappointing second season has sort of flown under the radar. Through 11 games, even with a significant bump in playing time, Goedert only has 31 catches for 289 yards (9.3 YPC) and 4 TDs, when the team has really needed him to step up and be more productive. He has also has several bad drops this year, and he had his second fumble of the season today (which the Seahawks recovered) when the Eagles were starting to build their best offensive momentum of the game.

There's a lot to unpack from the offensive line's performance on Sunday:

Post-game, Doug Pederson confirmed that Dillard was indeed benched, as opposed to something injury-related. His lowlight of the game came on a Wentz sack-fumble.

Andre Dillard gets BLASTED on this play, leading to a Wentz fumble. pic.twitter.com/kVkCBWHqPk

Pederson did not offer up any details on Brooks' "illness," and whether or not that was related to Brooks' inspiring battle with anxiety.

The result on the field was that Wentz had the pocket collapse around him regularly, which he obviously did not handle well.

5) The 'Kinda Good, I Guess' Award: The Eagles' defense

If you look at the scoreboard, you'll see that the Eagles' defense held an offense led by the MVP frontrunner to 17 points. Certainly they did enough to allow the offense to outscore the Seahawks. However, they were also aided by an incomprehensibly bad pass by Russell Wilson that should have been a touchdown, as well as a bad drop by DK Metcalf that should have also been a score. Those two plays resulted in 11 points left on the bone.

The defense also got fooled, badly, for the second week in a row on a trick play, and they looked ugly at all three levels on this 58-yard TD run by Rashaad Penny:

Obviously, the defense is the strength of the team right now, but they weren't without fault.

I hate to be the "RUN THE BALL, DOUG!" guy, but when you're missing your top three receivers, maybe you give the running backs more than 18 total carries instead of having Wentz throw 45 times?

Also, I'd take that foofy run call on 3rd and 3 that got blown up in the backfield, resulting in a lost fumble, and I'd put it in the shed, forever.

Look at the mesh-point on the fumbled handoff between Wentz and Sanders. Sanders needed six yards just to get to the line of scrimmage.

Pederson said H. Vaitai overset, DE disrupted timing. They ran it because of defensive structure. Compared it to a TE shovel. pic.twitter.com/CBtDLazoDd

7) The 'Rolling Heads' Award: Whoever is responsible for this offensive monstrosity

The Eagles' coaching staff was depleted when Frank Reich moved on to Indianapolis, and John DeFilippo moved on to Minnesota. Rather than conduct an extensive search for their replacements, the Eagles promoted from within, and are perhaps experiencing a little Peter Principle action.

If the offense continues to look anything like it has the last 11 weeks — and how it looked at times last season as well — the Eagles are going to have to replace some under-performing assistants.

8) The '4 Seed Or Bust' Award: The Eagles' postseason possibilities

The Eagles have next to no chance for a wildcard, as they are now three games behind the Vikings and four games behind the Seahawks, with head-to-head losses against both teams. Their only chance of making the playoffs is if they win the division.

9) The 'Win Out' (lol) Award: The Eagles' divisional title chances

If the Eagles are going to have any realistic chance of making the playoffs, they are probably going to have win their remaining five games. And if the Cowboys lose to the Patri*ts (they're currently down 13-9 in the 4th quarter as I type this), they will clinch the division if they win out!

Unfortunately, if they play like they did Sunday against the Seahawks, there's no guarantee that they'll even beat the garbage teams left on the schedule, much less the Cowboys themselves.

10) The 'Eroding Away' Award: The Eagles' Super Bowl halo

By winning their first Super Bowl in 2017, the Eagles bought themselves heaps of goodwill in the Philadelphia region, and beyond. A little less than 22 months later, they have become a very boring, difficult-to-watch team, and that's maybe worse than just being bad, which oh by the way, they also are.