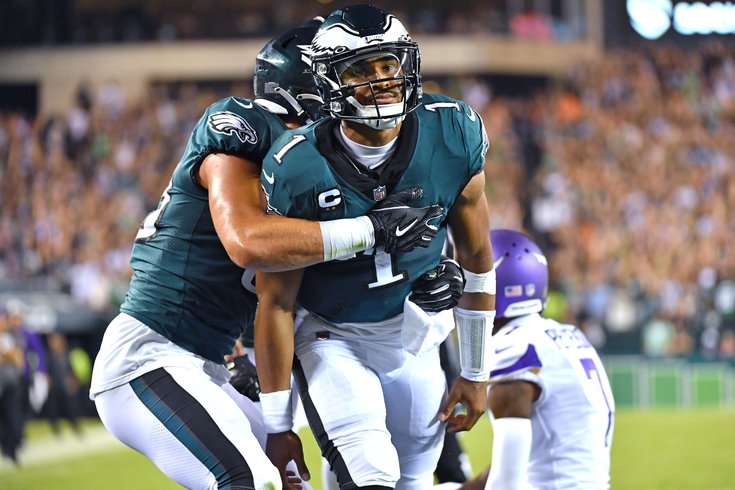 Jalen Hurts celebrating a 26-yard touchdown where he bullied his way into the end zone.

The Philadelphia Eagles administered a beatdown of the Minnesota Vikings on Monday night, to the tune of 24-7, in a game that probably wasn't even that close. As always, win, lose, or tie, we hand out 10 awards.

Hurts was outstanding. He was 26 of 31 for 333 yards, 1 TD, and 1 INT that wasn't his fault. He also added 11 carries for 57 yards and 2 TDs on the ground. But beyond the stats, he was great at some of things he was nitpicked for after the Eagles' Week 1 win over the Lions. He picked the Vikings' defense apart both from the pocket and on the run with passes that were on the money, allowing his receivers to get yards after the catch.

This was easily the best performance of Hurts' professional career, and if he can play at or near this level on a consistent basis, the Eagles have themselves a franchise quarterback.

In Week 1, Hurts repeatedly targeted A.J. Brown, and why not? He was dominating, so feed the hot hand! In Week 2, Hurts spread the ball around, as four Eagles players had at least 69 (nice) receiving yards:

Brown, Goedert, Smith, and Watkins are a really fun quartet, with diverse, dynamic skill sets, and Monday night is what it can look like when they're all involved.

As they showed on the telecast, Vikings safety Camryn Bynum (24) and/or Cameron Dantzler (3) bit the cheese on an out route by Goedert, leaving a streaking Watkins wide open down the field for his touchdown.

A look at the busted coverage that led to Quez Watkins' long TD. pic.twitter.com/zzsA4ZGCvW

That was a great play call by Shane Steichen for the quarters defense that was called, putting the defensive backs on that side of the field in a "pick your poison" bind, but it is also representative of the varied ways the Eagles' offensive weapons can stress opposing defenses.

Slay was a beast when matched up against Justin Jefferson tonight.

Darius Slay had more interceptions (2) than receptions allowed (1) as the nearest defender on 5 targets to Justin Jefferson.

The Vikings lost -11.9 EPA on the 5 targets, the most in any WR-CB matchup in a game over the last 6 seasons (min. 5 targets).#MINvsPHI | #FlyEaglesFly pic.twitter.com/xApKRStxg5

Slay had two interceptions and at least one additional pass breakup.

Jefferson was apparently going to do some sort of super cool thing after the game if the Vikings beat the Eagles.

#PerSource, if the Vikings win, do not miss Justin Jefferson at the postgame press conference tonight.

Here's a live look at the Vikings' press conference room where Jefferson was poised to speak: 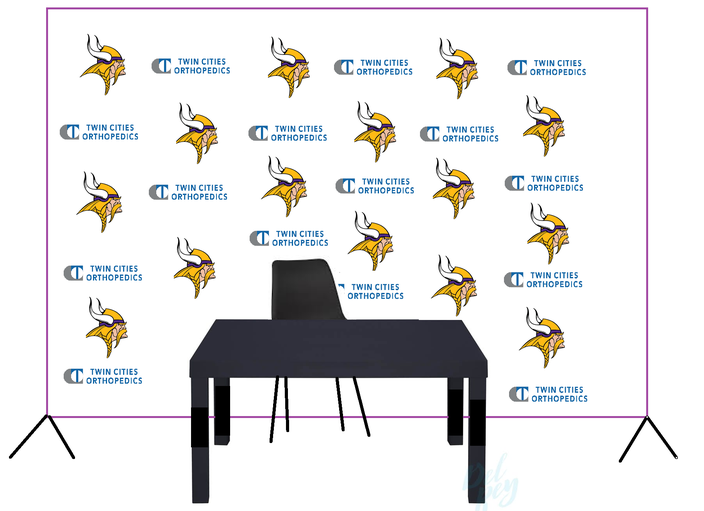 Gannon got heat 🔥🔥🔥 this week from the fanbase and media after the Eagles played poorly defensively against the Lions Week 1. In Week 2, he dialed up pressure in opportune moments, and seemed to often confuse Kirk Cousins, never really allowing him to get into a rhythm.

Gannon will escape criticism until the next Eagles bad defensive game.

Cousins has a career record of 10-43 against teams that have finished the season with a winning record. He beats bad teams, and loses to good ones.

As such, the Eagles are now a confirmed good team. #Science.

7) The 'Thank You' Award 🙏: Dan Campbell and Kevin O'Connell

In each of the Eagles' first two games, the opposing sideline called a timeout with the hopes of getting the ball back and scoring before the end of the first half, only to see the Eagles benefit from said timeouts by scoring points of their own.

In this case, the Vikings called timeout with the Eagles facing a 3rd and 5 from their own 21 with 22 seconds left in the half. The Eagles proceeded to hit on three straight chunk plays:

All season, Eagles coaches have raved about Zach Ertz's route-running and the way he understands leverage. This is vs. first-team All Pro Harrison Smith. pic.twitter.com/O5vdAHQw17

Well, Goedert sonned Smith Monday night, when he blocked him for 15 yards as Hurts ran in for a TD behind him.

Siposs made a huge play when he tackled CB Kris Boyd after a blocked field goal.

On the ensuing Vikings possession, Cousins threw a pick to a leaping Avonte Maddox, which probably deserves a video nod because that too was a great play.

The Eagles will play four short-rest road games this season, the first of which is against Carson Wentz and the Washington Commanders Week 3. So, you know, that'll be fun.