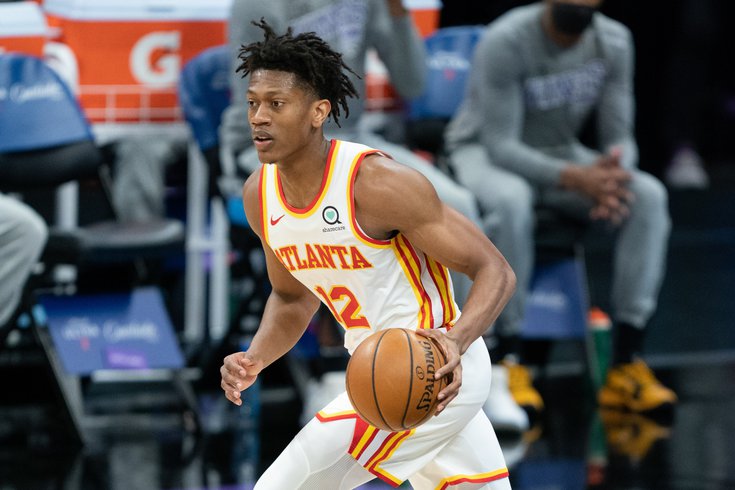 Hawks forward De'Andre Hunter is done for the season.

On Tuesday night, the Sixers evened up their Eastern Conference semifinal series against the Hawks at 1-1 thanks to a monster performance from Joel Embiid, a breakout game from Shake Milton, and suffocating defense on Trae Young. A day later, and there was some big news out of Atlanta, as it was announced that forward (and Philadelphia native) De'Andre Hunter, the fourth overall pick in the 2019 NBA Draft, is headed for surgery and will not play again this season.

Hawks' De'Andre Hunter is out for the season and will undergo meniscus surgery.

Hunter missed the first two games of the Sixers series with knee soreness — now we know why, as the team found a new partial tear in his meniscus — after averaging over 30 minutes per game against the Knicks in the Hawks' opening-round series. And while he averaged just under 11 points per game in that series (below his season average of 15 PPG), his absence has been a big one so far for the Hawks, particularly on the defensive end of the floor.

Sure, defending Embiid has been Atlanta's biggest issue and that's not something the 6-foot-8 Friends Central product would be asked to do, but the MVP runner-up hasn't been the only one getting the better of the Hawks. And with Hunter out, it's not only taken away one of his best defenders, it's also messed up all of Nate McMillan's rotations and caused some glaring holes for his team on the defensive end.

What hurts about not having Hunter, who’s missed both games with right knee soreness, is he can guard any of those players one-on-one, save for Embiid. That potentially limits one of Philly’s scoring options while letting the four other Hawks focus more on their individual matchups. The Hawks haven’t played well defensively in both games. Part of that is because they’ve turned the ball over far too often, and against this Sixers team, those turnovers will haunt them. The Sixers led the NBA in the regular season in forcing turnovers. In Game 2 alone, Philly was plus-8.5 points per 100 possessions in transition.

Hunter would also be a massive upgrade over Solomon Hill, who’s started both games at small forward in place of him. Hill’s defense is spotty at best, and he doesn’t offer anything on the other end of the floor. [...]

In this series, the Hawks lack the individual defenders needed to slow down the Sixers. Bogdan Bogdanovic can’t effectively guard Harris or Curry. Hill hasn’t slowed down Harris. John Collins isn’t strong enough to offer Capela help on Embiid. It’s a tall ask for the Hawks to offer resistance on that end of the floor without Hunter, and it’s showed in both games, despite them winning Game 1.  [theathletic.com]

As you can see, not having Hunter the rest of the way is going to stretch the Hawks thin on defense. And his teammates are well aware.

“We miss him a lot,” said Trae Young, according to The Athletic. “You definitely miss his presence, especially on the defensive end. He’s a great on-ball defender and a help-side defender. He’s really good at reading defenses. At the same time, he can score on the other end, too. We’re definitely missing a big piece of our offense and our defense with ‘Dre being out, but no one feels sorry for us. We still have to find a way to win.”

The Hawks had been hoping to get Hunter back at some point in this series, possibly in time for Friday night's pivotal Game 3 in Atlanta, but now it's clear that's not going to happen.

That being said, prior to facing the Knicks in Round 1, Hunter played in just 5 regular-season games for his team from February 1 on and the Hawks still went 31-22 over that time, including a ridiculous 27-11 after McMillan took over on March 1. And despite his absence, they were still able to split the first two games of this series in Philly. Maybe it's not as big of a loss as we're making it out to be?

Perhaps, but this isn't the regular season. And as this series wears on, the number of weapons on the Sixers could ultimately prove too much. If Doc Rivers is able to figure out a way to attack whatever weakness is left in the Hunter void, it could really stretch Atlanta's defense thin.

With the Sixers' weapons, that would spell trouble for the Hawks.