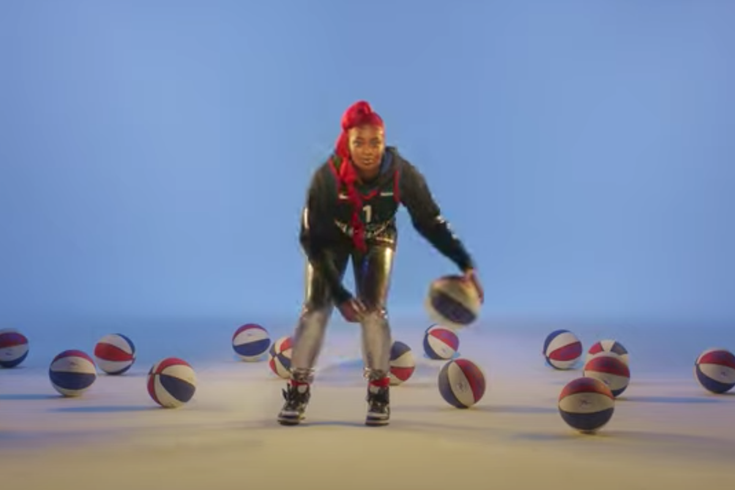 Tierra Whack has collaborated with the Sixers to create a catchy new track titled '76' that celebrates the team as it competes in the NBA Playoffs.

Tierra Whack is back with a new music video, and this time she's paying tribute to her hometown professional basketball team.

The North Philly rapper has collaborated with the Sixers to create a catchy new track titled "76" that celebrates the team as it competes in the NBA Playoffs.

Whack shouts out a number of Sixers throughout the song's lyrics. Among those who get some love are Ben Simmons, Joel Embiid, Doc Rivers, Tyrese Maxey, Tobias Harris and Danny Green. Whack also tosses out a "Trust The Process" reference during the song, too.

But maybe her most timely lyric was "Shake Milton makes millions" after the Sixers guard poured in 14 points off the bench in the second half of Tuesday night's Game 2 win over Atlanta.

Whack performs throughout the music video alongside break dancers and a drum line. She also can be seen wearing a Mike Scott jersey and watching highlights from this season during various points of the music video.

The singer-songwriter also repeats a number of lines throughout the anthem, including "ain't nothing but a rebound" and "76," as well as "and the crowd goes nuts."

While the song might not be as iconic as "Here Come the Sixers," which famously plays after home wins at the Wells Fargo Center, Whack's newest track is still really good. Watch the music video below:

The 25-year-old Philly native is known for her eye-catching music videos and whimsical taste, both in her music and in her clothing style.

Whack was in attendance courtside for Game 2 on Tuesday night as the Sixers rolled past the Hawks 118-102 to even up their Eastern Conference semifinal series at 1-1.

The top-seeded Sixers are seeking their first trip to the Eastern Conference Finals since 2001, the same year in which the team last appeared in the NBA Finals. The 76ers have not won an NBA championship since 1983.