With head injuries mounting, will cities put their feet down on E-scooters?

AUSTIN, Texas — Almost half of the injured Austin scooter riders identified by the Centers for Disease Control and Prevention in its first-ever study of dockless electric scooters suffered a head injury, with 15% experiencing a traumatic brain injury.

The report, presented Thursday both in Austin and Atlanta, where the CDC is headquartered, covers 87 days last fall in Austin when almost 200 people were injured in scooter crashes. Just one of the riders wore a helmet and 33% of those riders were hurt on their first scooter ride.

Austin city officials requested the CDC’s help in tracking injuries last spring as e-scooters started taking over the city. The investigators identified 271 individuals with potential e-scooter-related injury incidents during the study period last fall; of those, 190 confirmed an e-scooter riding-related injury. Most accidents occurred on streets. Most riders were men. Among the injured, 48% suffered a fracture, laceration or abrasion to the head; 70% injured upper limbs; and 55% injured lower limbs. Of the 190 riders, 35% suffered some type of fracture.

Despite injuries, 38% indicated they will use a scooter again.

With the increasing availability of scooters as an urban transit alternative, Austin and other cities around the world are trying to balance the safety and needs of scooter riders and the motorists, bicyclists and pedestrians who must navigate around them on sidewalks and streets. Some localities ban the scooters outright, while others try to control the number permitted or specify boundaries for use or places to park them. Dockless scooters arrived in Austin last April and quickly went from zero to more than 15,000 permitted as 10 companies were licensed to operate, according to the city’s dockless mobility website.

Although all those scooters aren’t out at once, the two companies with the most devices in Austin — Bird and Lime — each boast on their websites about availability in more than 100 cities around the globe. As those numbers continue to multiply, the CDC’s report will help shape how cities approach transportation policies, regulation and public safety.

Paul Saffo, who has spent more than 20 years exploring large-scale, long-term change, teaches forecasting at Stanford University. He said cities also need to consider a fundamental question about private use of public property.

The CDC epidemiologists, collaborating with Austin Public Health and the city’s Transportation Department, arrived in Austin last December to examine scooter-related injuries from September to November, including interviewing the injured and studying their medical records to determine road conditions, weather, helmet use and other behaviors, such as alcohol use while riding.

Among the findings, 55% of the injured riders identified as male. The median age was 29, although riders ranged in age from 9 to 79. Most injuries (55%) occurred in the street, while 33% were injured on the sidewalk.

“It’s hard when you’re trying to figure out what to do and you look around for other examples.” – Steve Adler, mayor of Austin, Texas

The study also notes that findings don’t support the perception that scooter injuries are due to collisions with vehicles. But speed is a factor, the study suggests.

“While more than half of the interviewed riders were injured while riding a scooter in the street, just 10% of riders sustained injuries by colliding with a motor vehicle,” the study found. However, 37% of injured riders reported that excessive e-scooter speed contributed to their injury. And 29% of riders had consumed alcohol within the 12 hours preceding the scooter ride.

“Overall, 63% of the injured riders had ridden an e-scooter nine times or fewer before injury,” the study said.

“The CDC’s report is an important one for everyone working to create safe, multimodal transportation systems that expand access, reduce congestion and better link people with public transportation,” David Spielfogel, chief policy officer at Lime, said in a statement. “We look forward to further partnering with the medical community and regulators to improve safety for pedestrians, bicyclists and users of micromobility. If we want to help people move around their communities efficiently and equitably, we need to ensure options besides cars are trusted as safe and reliable.” 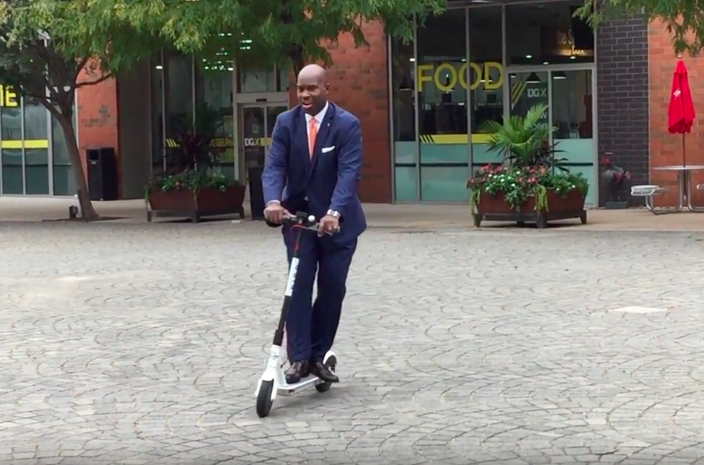 Philadelphia City Councilman Derek Green takes a spin on an e-scooter during a 'pop-up demonstration' at the Piazza at Schmidt's Commons in October 2018.

'WHERE DO SCOOTERS FIT'

Bird, based in Santa Monica, Calif., issued a safety report last month. Among the findings were that Bird’s internal data and independent research suggest an injury rate similar to bicycling. And among the recommendations are that cities design safer streets and maintain safer street conditions.

Injuries, which are being recorded at hospitals and emergency rooms across the country, have resulted in fewer than a dozen fatalities nationwide — including one in Austin earlier this year. Two scooter riders died in March in California and two others were killed last month after being hit by cars in Fort Lauderdale, Fla., and Hollywood, Calif. Last week, a 5-year-old in Tulsa, Okla., was killed while riding a scooter with his mother, who escaped the vehicle collision with minor injuries.

The University of Texas at Austin in March reduced scooter speeds from 15 mph to 8 mph — made possible through geofencing, which uses GPS technology to create a virtual boundary and enables scooter companies to adjust scooter speeds within a defined area, such as the university campus.

The Texas Senate on Wednesday approved a bill to regulate e-scooters statewide, including prohibiting them on sidewalks and at speeds over 15 mph, as well as setting 16 as the minimum age to ride. The measure now moves to the House for consideration.

During the city’s South by Southwest Conference & Festivals in March, Austin Mayor Steve Adler appeared at a session about scooters and explained the challenges communities such as Austin face.

Saffo, the Stanford forecaster, said discussion now needs to be “where do scooters fit in this larger, ever more complex ecology of transportation options. People better sort out how they feel about scooters quickly because there’s a whole menagerie of others,” he said.

Urban planner Sarah Kaufman, associate director of the NYU Rudin Center for Transportation, said scooters present a safety issue for riders and pedestrians alike, and it’s up to cities to provide the right infrastructure, such as protected lanes or wider sidewalks.

“At some point, cities have to change the streets to move away from cars as the main mode of travel,” Kaufman said. “We can’t change the design of our cities overnight, but when we think of the long-term plans we’re making, the car cannot be the dominant mode.”