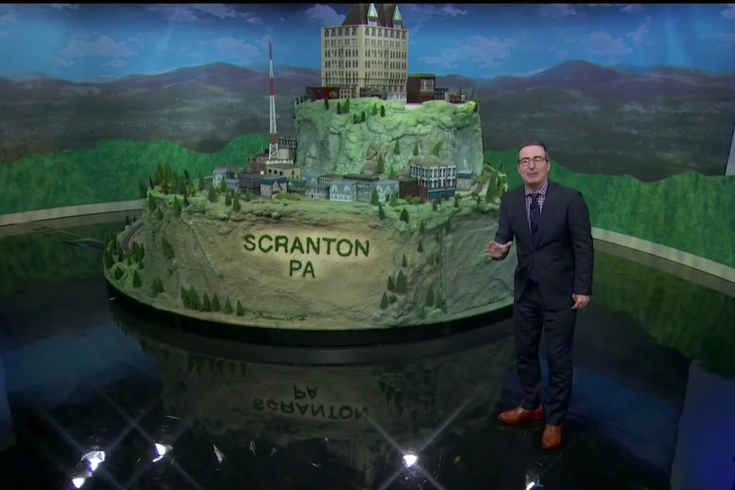 That massive train set HBO's John Oliver gave a Pennsylvania news station on Sunday? It's homeward bound but won't end up in the station's backyard as intended.

WNEP-TV, based in Scranton, announced Friday that its team was en route to grab the gift from a storage facility in Secaucus, New Jersey, with the help of a donated tractor-trailer to deliver it to the Electric City Trolley Museum.

UPDATE: The huge train set John Oliver gave a news station is officially on display at a Pa. museum

The long-winded tale began to unfold when Oliver closed Sunday's episode of "Last Week Tonight" by telling the station to pick up the "greatest backyard train that local news has ever seen."

The gesture was made to smooth over any hard feelings after Oliver featured the station's infamous train set that appears in many of its weather segments during an earlier episode of "Last Week Tonight." The toy has been a sore spot for residents who call in to voice either their love or hatred for the model.

Oliver compiled some of the best responses to air nationally.

“I am so sick of hearing about these idiots worrying about the stupid train in the background already,” said one caller, while another said he'd rather “put a quarter stick in that train and blow it up.”

Scrantonians weren't too happy with Oliver's bit. One said that the residents "aren't clowns for [Oliver's] amusement," according to Sunday's "Last Week Tonight."

The HBO host clarified that he wasn't trying to make fun of Scranton before he unveiled an 18-foot-wide, 16-foot-tall train set that featured "every Scranton landmark that [the show] could find on Google."

A few reporters from the station tasked with picking the set up said in a Facebook live video posted Friday that it's just too big to be in WNEP's backyard and its foam and cardboard parts wouldn't sustain harsh weather.

"Anybody can go and see it [at the museum]," WNEP reporter Carmella Mataloni said in the video. "This was a gift to our area and it's going to be nice for our area and the people in it to go and be able to see it whenever they want, which is a really nice thing."

HBO has sent someone familiar with how to put the train set together back to Scranton with the crew, according to the station. WNEP said that the set "will be assembled sometime next week" and its grand unveiling will be announced at a later date.

Check out Oliver's segment from Sunday's "Last Week Tonight" below: