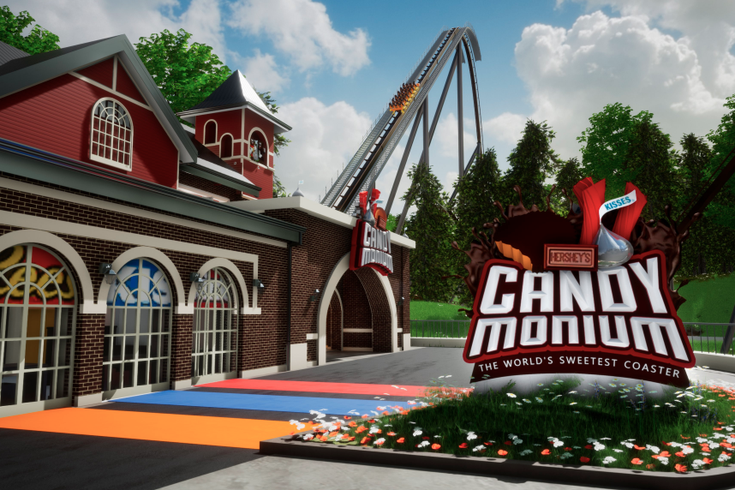 Hersheypark unveiled plans for its 15th roller coaster on Wednesday, which will be the amusement park's longest, fastest, and tallest coaster yet.

Hersheypark's $150 million expansion project will include the theme park's most impressive roller coaster yet.

Candymonium will open in summer 2020 as the longest, fastest, and tallest thrill ride Hersheypark has seen in its 113-year history. Officials announced the ride's specs and opening date to 500 season pass holders on Wednesday.

The park's 15th coaster will feature a lift height of 210 feet, a maximum speed of 76 mph, seven camelback hills, and a track length of 4,3636 feet, spanning seven acres and with a runtime of 2 minutes 26 seconds. It replaces Skyrush, installed in 2012, as Hersheypark's tallest coaster.

In 2014, Hershey built the Cocoa Cruiser, a family-friendly roller coaster, and then in 2015 it unveiled Laff Trakk, an indoor, spinning, glow-coaster.

Because Candymonium's peak height will exceed 200 feet, it classifies as a "hypercoaster," which are some of the most common kinds of roller coasters. Other local examples of hypercoasters include Steel Force at Dorney Park and Raging Bull and Ride of Steel at Six Flags Great Adventure.

Introducing our 15th Coaster, Candymonium - the tallest, fastest, longest, and sweetest coaster at Hersheypark! Want to be the first to ride? https://t.co/IEm5CZmZAB #HPChocolatetown pic.twitter.com/8kSXov1q38

According to a Federation Aviation Administration filing, the Bollinger & Mabillard project has been in the works since 2018.

The coaster is part of Hershey's major expansion project called Chocolatetown, which will include new food vendors, an updated and revamped welcome area, and a new flagship store. It will be open in 2020.

The park's most recent addition was Reese's Cupfusion this past May. The interactive indoor ride is a laster shooting target game.