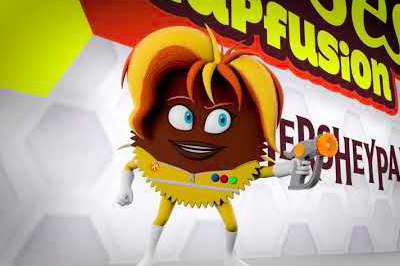 Commander Cup is Chief of Security at the upcoming Reese's Cupfusion attraction at Hersheypark.

Now that Hersheypark is no longer underwater (it's Maryland's problem now), the amusement park is ready to reveal its next attraction.

The brains behind the park have shrewdly turned to one of the candy company's most popular products: the Reese's Peanut Butter Cup.

In a video released on Thursday, the park unveiled plans for Reese's Cupfusion, which they describe as "a new dark ride gaming experience."

The interactive ride is centered around a mission to protect the Reese's factory from rogue monsters and shield the Crystal Cup from theft.

Led by Commander Cup, patrol car riders will be equipped with an "Amplifier" that beams Reese's spirit in the direction of the invaders, incapacitating them in their quest to steal chocolate, or something.

The ride will allow guests to compete for high scores and earn their way into the Hall-of-Fame.

Last year, Hersheypark debuted the Triple Tower, a trio of free-fall drops representing three of the company's signature candies. The park plans to release more information about Reese's Cupfusion over the coming year.