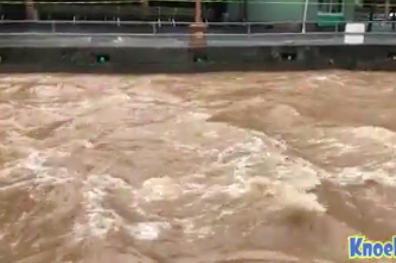 Two of Pennsylvania's most popular amusement parks were forced to close for the day on Monday as torrential rains left both park grounds severely flooded.

Knoebels and Hershey Park both shut down operations in the midst of a wave of heavy storms sweeping across central and eastern Pennsylvania, leaving much of the state under a flash flood watch.

LATEST: Hersheypark to reopen Friday, Knoebels hints it will, too, as flooding cleanup continues

HERSHEY PARK right now....
Closed down for the time being. pic.twitter.com/luf9EdlL8N

Hersheypark is having some serious flood issues. We have been getting crazy rain lately and it’s not supposed to stop anytime soon. Fingers crossed, the damage won’t be too bad! 😢😳☹️ pic.twitter.com/1mps3Vn50A

Knoebels, located in Elysburg, was set to begin its annual Christmas in July celebration on Monday, an event scheduled to continue through Friday. Park officials said it was too soon to determine when Knoebels would reopen.

Hershey Park is on track to reopen Tuesday at 10 a.m., officials said in a statement.

The days ahead appear likely to bring more rain and flooding to the region.

A flash flood watch is in effect through Wednesday evening for a number of Central Pennsylvania counties, including Northumberland County, where Knoebel’s has entertained families for generations along the south branch of Roaring Creek,a tributary of the Susquehanna River.

Heavy rains are forecast Monday night and all day Tuesday, with several inches of new rain possible, according to the National Weather Service.

“The expected additional heavy rain of up to several inches in some locations could cause flooding in very short order,” the flood watch warns.

There is a chance of showers and thunderstorms the rest of the week as well, forecasters said.

Those planning to attend Knoebels or Hershey Park this week should be sure to confirm that the parks will be open over the coming days.