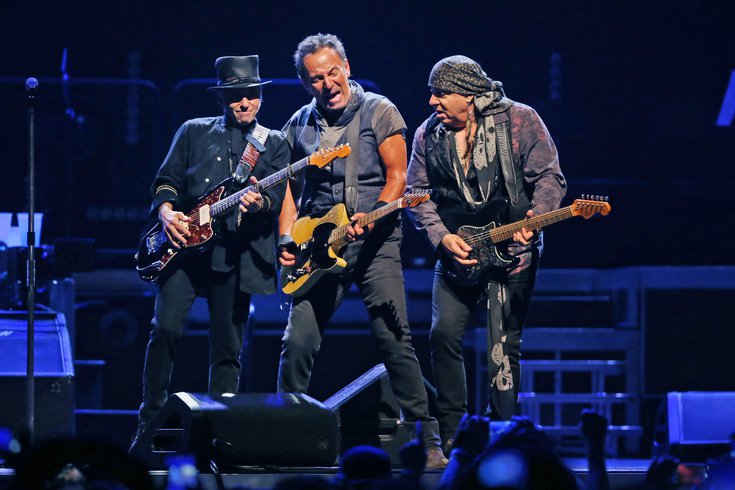 Tom Morello's solo album 'The Atlas Underground Fire' will include a cover of AC/DC's "Highway to Hell," sung by Bruce Springsteen, center above, and Eddie Vedder. The Rage Against the Machine guitarist has played with Springsteen before, filling in with the E Street Band in 2014.

Tom Morello of Rage Against the Machine has teamed up with Bruce Springsteen and Pearl Jam's Eddie Vedder for a gritty cover of AC/DC's "Highway to Hell."

The song will be featured on Morello's upcoming solo album, "The Atlas Underground Fire," set for release Oct. 15.

The trio first teamed up to sing the AC/DC classic at a Springsteen and the E Street Band concert in Melbourne, Australia,  back in February of 2014, according to the Rolling Stone..

At the time, Morello had temporarily joined the E Street Band as lead guitarist while Steven Van Zandt stepped out to film "Lilyhammer," during the "High Hopes" tour. The pair played the song several times while on tour and later Vedder made a surprise appearance onstage, joining them to sing the cover.

Vedder said in an interview on Howard Stern Show in November 2020 that Springsteen had encouraged him to join the pair on stage while while the Pearl Jam frontman was on a separate tour in also Australia, Variety reported.

"Hey, Ed! I've got an idea!," Vedder recalled Springsteen saying. "Here's the deal. All right. First song: AC/DC, 'Highway to Hell.' You take a verse, I take a verse, and then you're done. You can drink beer, you can do whatever you want. None of this encore (expletive). You don't have to wait around. First song, hit it with me, and you're good to go!"

Morello's solo album was recorded during the pandemic, and features several other music stars, including Chris Stapelton, Damian Marley, Bring Me the Horizon, Phantogram, Mike Posner and more.

He said he didn't have access to an engineer during the lockdown, so he had to record all the guitar portions on the voice memo app on his phone.