The North Broad Street staple served its last cheesesteak earlier this month, the building is currently for sale 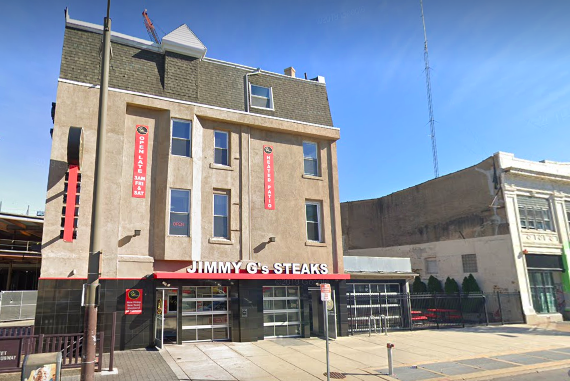 Jimmy G's Steaks, located in North Philadelphia, closed its doors for good this month and the building was listed for sale.

Jimmy G's Steaks officially closed its North Broad Street doors last week, joining the many businesses that shut down during the pandemic.

The cheesesteak shop, located at 695 N. Broad St., had been at its location for nearly eight years, and after a "For Sale" sign was posted in its window and Google recently marked the business as "temporarily closed," it was confirmed it closed for good.

The owners, father and son Glen and Nick Strafella, did not announce the business' departure on social media, or respond to requests for comment. However, a realtor with 20/20 Real Estate told Billy Penn that Glen wanted to retire.

After the "For Sale" sign was posted in the window in late July, several bidders expressed interest in the $2.2 million property, although no official offers have been made.

Before opening the shop, the Strafellas were in the check-cashing business and they bought the building next door to prevent a competitor from moving in, the Philadelphia Inquirer reported in 2014. They later teamed up with a friend, Jimmy Markasis, to turn the building into a sandwich business.

The restaurant prided itself on serving a fresh sandwich in less than a minute from when it's ordered. It offered a menu of fries, chicken cutlets and lamb tzatziki steaks alongside the cheesesteaks. It's walk-up window was open until 3 a.m., catering to the light night crowd.

Several other businesses have shuttered this summer following the COVID-19 slump. Cadence, a popular BYOB restaurant in South Kensington, is closing its doors in mid-August.

The owners said the financial impact of the pandemic and the inability to connect with their family during the lockdown caused them to reassess their business.

A historic institution, Wildwood's Shamrock Beef and Ale closed its doors earlier this summer after 80 years in business. The bar hosted a liquidation sale so regulars could take a piece of the location with them.

The Trolley Car Café in East Falls also closed for good on June 30, the owners said. The restaurant offered all employees that stayed at the location through June a bonus, as well as help finding a new job.