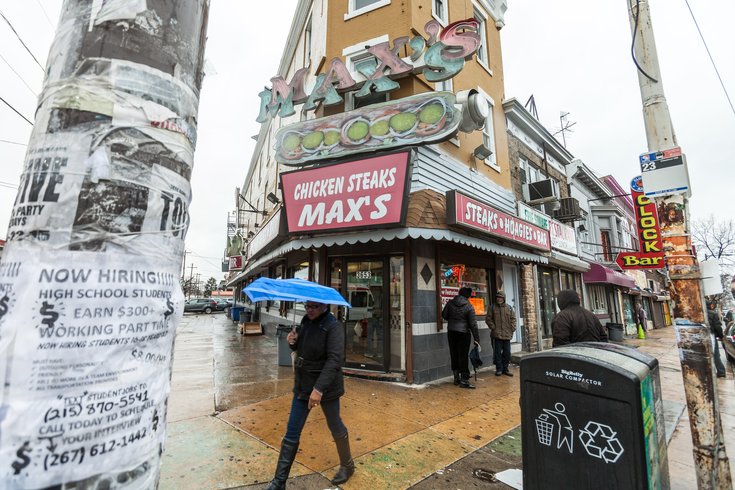 Max's Steaks, at Germantown and Erie avenues in North Philadelphia, was a location in the movie "Creed."

When the casual diner goes in quest of a cheesesteak, they will often alight at Pat’s or Geno’s. If not those dueling colossuses, then perhaps Tony Luke’s in deepest South Philadelphia. A franchise that has spread to both the airport and the Kingdom of Bahrain must have something going for it.

These eateries tend to suck up most of the oxygen when it comes to the cheesesteak debate, although a few breaths are reserved for Jim’s on South Street or John's Roast Pork on Snyder Avenue. Most Philadelphians will agree, however, that this is all a very tired and claustrophobic topic indeed.

It was with relief, then, that Ryan Coogler’s Creed film dispensed with all these obvious choices and went to Max’s at 3653 Germantown Ave. Among the city’s steak venues, it’s a relative newcomer at less than three decades old. But this North Philly eatery offers one of the better versions of Philly’s most famous sandwich. So when Tessa Thompson dragged Michael B. Jordan through the door it became clear this movie wasn’t faking.

Pop cultural references to Philly cheesesteaks tend to be wearisome in the extreme. But the first date Coogler staged over a couple of 12-inch steaks, in a red vinyl booth at Eagle Bar (the drinking establishment attached to Max’s) is probably the best we can hope for in our lifetimes, if not in human history. Creed should win an award for tastefully handling the much-hyped delicacy with taste – although we’ll probably just have to settle for an Oscar win Sunday night by Sylvester Stallone, who received the film’s only nomination.

“I feel like it [Creed] definitely gave us a bump,” says Eddina Bazemore, who tends bar here and lives two blocks away. “Once the movie came out, people from all over came out.” Asked for more detail, she paraphrased their sentiments: “Got to get me a Max’s cheesesteak.” 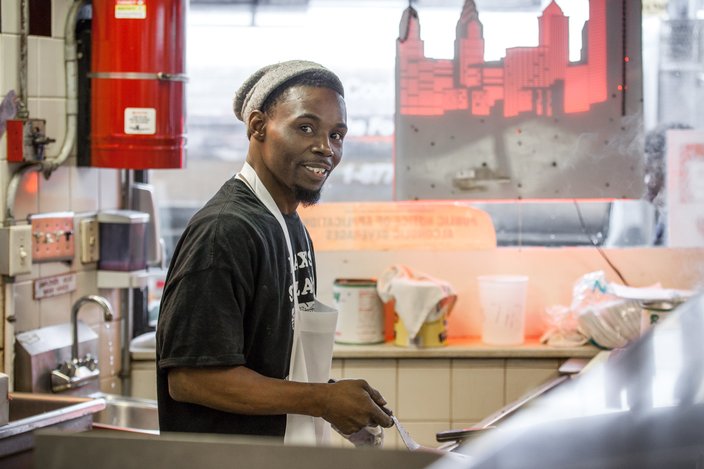 Troy Weston was featured when Creed filmed at Max's Steaks in North Philadelphia. He played Kyri in the film.

The feeling was widely shared, even before director Coogler showed up. Max’s is a North Philly institution. Its praises have been sung by everyone from chef and cooking show host Sunny Anderson to rapper Meek Mill to comedian Kevin Hart, who has performed an assortment of good deeds on the sidewalk out front of the restaurant.

Put his restaurant anywhere else in the city, and the cheesesteaks would be flying out the door, its owner says.

“Take a look at the kitchen, it's dead. I don’t do nearly the business because of the location.” – Carl Weiner, owner of Max's Steaks

Max’s Steaks is located immediately to the east of Broad and Erie, in the bustling, if slightly shabby, commercial hub of North Philadelphia. Across the street is the bookstore Black and Nobel, and a little further up Germantown Avenue is Dwight’s Southern Barbeque, another culinary gem that is underappreciated outside the neighborhood.

The intersection is a transit hub, where the Broad Street Subway, the fabled Route 23 bus, and a few other bus lines all come together. There is often a milling mass of people standing around waiting on SEPTA, shopping, or just hanging out. Most are African-American folks from the surrounding area, although Temple students and commuters are visible as well.

At midday on a recent weekday, Weiner is sitting at the very Eagle Bar booth where Jordan and Thompson romance each other in Creed. There is nothing to identify it as such, unlike the Llanerch Diner in Upper Darby, where serious signage abounds at the table where Jennifer Lawrence and Bradley Cooper batted eyelashes at one another. (“That’s an idea, I should do that,” Weiner says to himself, halfway through the interview.) 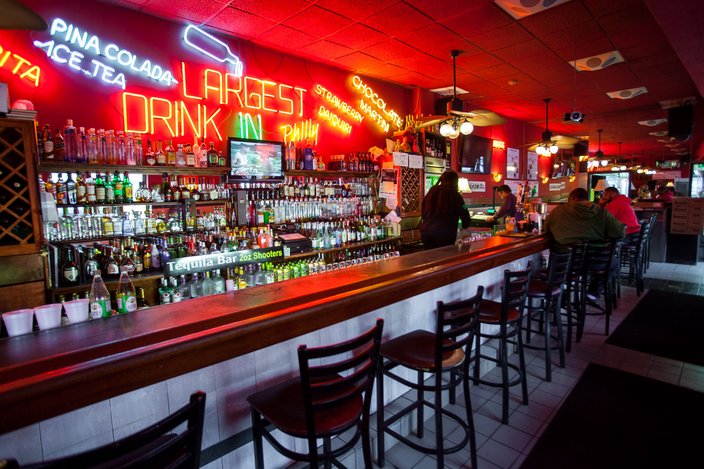 Eagle Bar is the other half of the business at Max's Steaks.

About five or six customers sit at the bar, quietly watching Law and Order  on the television, nursing various shades of beer and malt liquor. At the lunch counter, a steady trickle of customers order their sandwiches but there’s never a particularly heavy rush. Certainly nothing like the lines that typically snake out the door, and around the corner, at Jim’s on South Street.

That spectacle is what gave Weiner the idea to open a cheesesteak joint of his own roughly 25 years ago. While eating lunch at Lickety Split, the bar and pizza place across the street from Jim's Steaks, he was stunned by the flow of traffic into the venerable South Street establishment. Weiner has owned bars and businesses in North Philly for much of his working life, so opening Max’s in the area was an obvious choice.

The restaurant has received a share of attention over the years, most notably fighting its way to the top of Dan McQuade’s list of the best cheesesteaks in Philadelphia in Playboy. Behind the counter a neon sign reads “100% Sirloin Steak,” a distinction that Weiner says is unique to his restaurant.

They are delicious sandwiches, but Weiner has a serious demand issue. The two Census tracts that Max’s straddles both have lower labor force participation rates than the city as a whole. The commuters who roll through Broad and Erie, generally aren’t big spenders either. Not even Creed can lure tourists to North Philly. 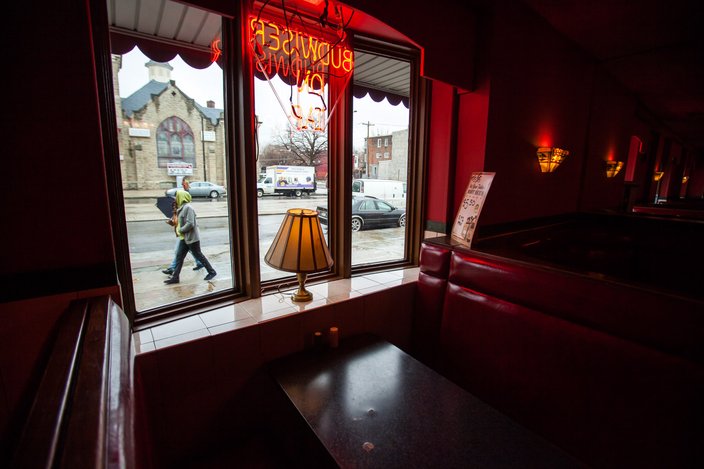 A scene from Creed shot in a booth similar to this one at Max's Steaks.

“Take a look at the kitchen, it's dead,” sighs Weiner, who is small and tan in a leather jacket, looking a bit like an extra in a 1970s movie about gritty urban affairs. “I don’t do nearly the business because of the location.”

The Eagle Bar no doubt helps cover the difference. It’s an elaborate, fully-loaded and well-appointed bar, with an enormous neon sign overhead stating “LARGEST DRINK IN Philly,” as a constellation of concoctions float around it (“Strawberry Daiquiri,” “Pina Colada,” “Ice Tea.”) An array of specials is advertised at various points on the long bar – today champagne splits are half price – although the bartender, Bazemore, says the best-selling drink is the Trash Can. This elixir contains Hennessey, Southern Comfort, Bacardi 151, and Curacao and is topped off with Red Bull. It costs $14 and several years off the imbibers’ life.

“The owner is always giving people an opportunity to work,” says Latifah Artemus, a neighborhood resident who has just popped into the bar. “Max’s has the best margaritas, too. And they have the nicest, sexiest bartenders. Presentable and seductive and their hair is always done just right.”

Neither Artemus, Weiner nor Bazemore are following the Academy Awards. No one mentions the controversy swirling around the fact that Creed and other films featuring people of color have been shut out of the ceremony. But the two women, at least, loved the movie. (Weiner had a great time during the filming, but only liked Creed okay, but he prefers Goodfellas.)

“I’m not really a boxing fan, but I liked that it was right here in my neighborhood,” Bazemore says. “I’ve seen the old Rocky movies, but I can’t really remember them. They were so long. It’s a generation thing, a younger guy, I liked looking at him. The older one [Sylvester Stallone]…” She just shakes her head.

Clearly Academy members felt differently, but it’s hard to take their tastes seriously. They’ve probably never even had a cheesesteak. Or a Trash Can.