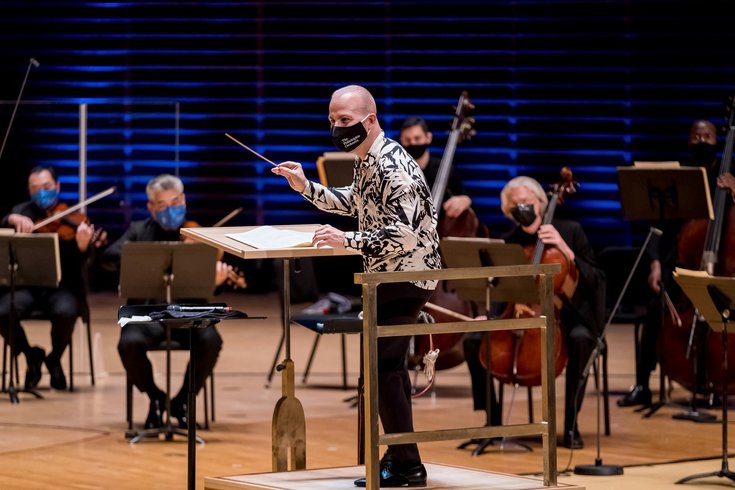 The Philadelphia Orchestra will help kick off New York City's iconic Carnegie Hall when it opens its doors to the public for the first time in more than a year. Conducted by Yannick Nézet-Séguin, the orchestra will take the stage at 7 p.m. Wednesday, Oct. 6, 2021.

New York City's iconic Carnegie Hall is calling on Philadelphia musicians to headline the first show on the venue's main stage in more than a year.

The Philadelphia Orchestra will kick off a season of live music Oct. 6 at Carnegie Hall’s Opening Night Gala. The performance will be the first in the venue's largest concert hall, Isaac Stern Auditorium, since it was shut down in mid-March 2020 due to coronavirus concerns.

Conducted by Yannick Nézet-Séguin, the orchestra will begin with Valerie Coleman's "Seven O'Clock Shout," which is a tribute to frontline workers and the resiliency they've shown during the pandemic. It's a familiar piece; the orchestra performed it during a virtual gala in June 2020 that raised thousands of dollars during a time when in-person shows seemed unfathomable.

"'Seven O’Clock Shout' makes your heart full the same way Aaron Copland can," the Inquirer's Peter Dobrin wrote in a recap of the online gala. "It’s just the message we need right now."

After the opening number, renown pianist Yuja Wang will join the orchestra on the stage for Rachmaninoff’s "Piano Concerto No. 2." From Beijing, Yang received formal training at Philadelphia’s Curtis Institute of Music and has been a featured soloist with the orchestra in the past. In 2017, she was named Musical America’s Artist of the Year.

The evening will wrap up with Iman Habibi's "Jeder Baum spricht," a Beethoven-inspired "reflection on climate change," and Beethoven's "Symphony No. 5."

A pre-show cocktail reception begins at 5:30 p.m. in Carnegie Hall's Rohatyn Room, and the performance will get underway at 7 p.m. The night will then segue into a black-tie dinner at 8:30 p.m. at Cipriani 42nd Street.

Individual gala package tickets are available for $1,000 and include entry into the cocktail reception. If the ritzy post-show gala is more your thing, you can pay $1,500 and have entry included with your ticket to the performance. Tables start at $20,000 and include "the very best seating for the concert and a table at the post-concert gala dinner," Carnegie Hall's website says. To RSVP for the gala, click here.

The venue will sell a limited number of concert-only tickets that cost between $68 and $225, according to the Inquirer. Tickets go on sale to the general public at 11 a.m. Aug. 30.

Due to the ongoing pandemic, Carnegie Hall said it will wait until October to determine seating assignments for the concert and subsequent dinner. Guests will have to show proof of full vaccination against COVID-19 before entering the building.

"While the world continues to fight COVID-19, we are examining all aspects of the Carnegie Hall experience so that audiences, artists, visitors, staff and volunteers are able to return with confidence," venue representatives said. The Philadelphia Orchestra last opened Carnegie Hall's concert season in 2017.

The orchestra will celebrate the reopening of the Kimmel Center on Oct. 5, the night before it heads to New York City, with a performance at Verizon Hall featuring Yo-Yo Ma on the cello.