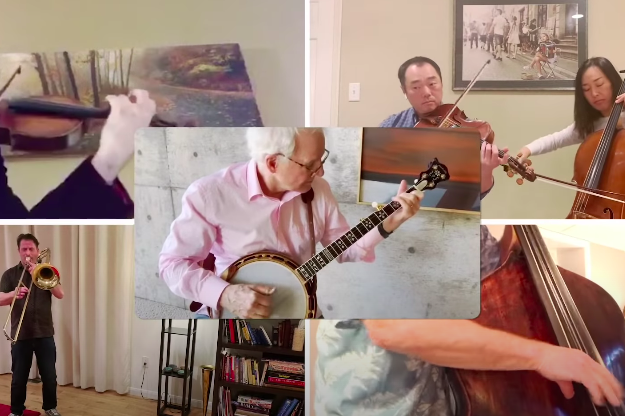 Long-time banjo player Steve Martin plays his song 'Office Supplies' with the Philadelphia Orchestra during the HearNOW gala on June 20, 2020.

Martin played the banjo during Saturday's HearNOW: At Home Gala, a free virtual concert that included performances by the orchestra and celebrity musicians. Yannick Nezet-Seguin, an award-winning conductor and the music director of the Philadelphia Orchestra, hosted the event.

The 74-year-old Martin performed "Office Supplies" alongside the orchestra, whose members played their respective instruments from different locations due to the COVID-19 outbreak.

The song comes from Martin's 2017 banjo album "The Long-Awaited Album," a collaboration with the Steep Canyon Rangers, a North Carolina-based bluegrass group.

The gala was originally scheduled to be held June 6, but was postponed after the police killing of George Floyd shook the country. HearTOGETHER: A Healing Conversation in Music and Words, a virtual event hosted by Black musicians Wynton Marsalis and Valerie Coleman, took place instead.

"We dedicate HearTOGETHER to George Floyd, Ahmaud Arbery, Tony McDade, Breonna Taylor, and the countless Black Lives wrongfully and tragically lost before them, and to the value and dignity of all Black Lives," the Philadelphia Orchestra wrote in a release detailing the postponement of HearNOW.

Due to restrictions on in-person gatherings, the performers played their parts from separate locations. Some of them were pre-recorded. Gatherings cannot exceed 25 attendees while Philadelphia is in the yellow phase of Gov. Tom Wolf's COVID-19 reopening plan.

The full HearNow performance can be viewed here until June 25.