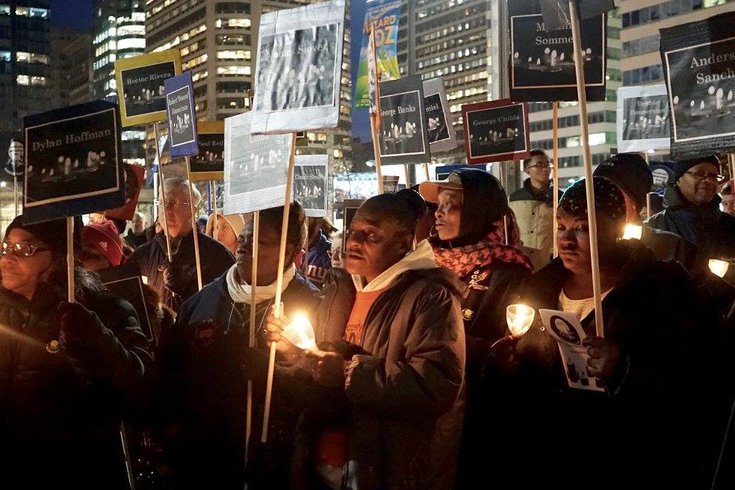 Activists at a past Homeless Memorial Day in Philadelphia. On Tuesday, advocates for the homeless will gather in Thomas Paine Plaza at 4 p.m. on Tuesday to call for an end to homelessness in Philadelphia and to honor the city's unhoused residents who died this year.

Activists will gather in Thomas Paine Plaza at 4 p.m. on Tuesday to call for an end to homelessness in Philadelphia and to honor the city's unhoused residents who died this year.

Homeless Memorial Day is celebrated in over 150 municipalities nationwide. It happens annually on or near Dec. 21, the first day of winter and the longest night of the year, which is a particularly tough time for those sleeping on the streets.

The day of commemoration has existed since 1990 and the event in Philly has been held for the past 25 years per a press release from the organizers.

In the park near City Hall, over 300 names will be read out by friends of the deceased and homeless service providers. But organizers say over 400 homeless people died this year.

This is the largest number of deaths reported since the event was first carried out, said Mary Scullion, the executive director of Project HOME, which provides services to Philadelphia's homeless population.

Both people who were unhoused when they died and those who were able to find a home by the end of their life will be commemorated as part of the ceremony.

The COVID-19 pandemic and the opioid epidemic have laid a heavy burden on Philadelphia's homeless community and contributed to many of those deaths, according to the press release.

"This event is an opportunity to invite others to recognize the value of all the individuals," said Jaquiline Watkins, a member of the event's planning committee who works with the Sunday Breakfast Rescue Mission – a Christian organization which has been aiding Philly's homeless since 1878.

According to a study conducted by the Philadelphia Office of Homeless Services, there are 4,302 homeless people in the city, including 700 who are unsheltered, meaning they're sleeping somewhere not meant for human habitation.

Those stats dropped significantly this year. Between 2017 and 2020, the total homeless population fluctuated between 5,634 and 5,788 while the unsheltered population didn't drop below 956.

Still, the study singles out one neighborhood that's seen a dramatic increase in homelessness – Kensington, which has become famous nationwide as an epicenter of the opioid crisis.

While the city and local non-profits continue to provide a wide array of services to Philly's homeless population, the organizers and participants in Tuesday's event believe raising awareness around the issue is key to stamping it out.

"It’s imperative that we continue to speak out about the struggles faced by people who experience homelessness, poverty and addiction," said Philly Councilmember Jamie Gauthier, who is also a member of the planning committee.

More information about how to participate in Philly's Homeless Memorial Day can be found on the event's website. There, people can also submit names to be read off at the event.