What was once a quiet race to see who will face incumbent U.S. Sen. Patrick Toomey in the fall has morphed into the land of crazy tips and “hey, lookit this!” emails.

From concerns about the use of stock footage in ads to the dredging up of years-old stories, the Democratic primary has certainly been, well, entertaining from this here perspective.

All of which brings us to the latest little nugget of non-news news: An America Rising PAC post headlined “Ed Rendell’s Fundraiser For Katie McGinty Mysteriously Cancelled.”

The political action committee which prides itself on sharing “opposition research” about Democratic candidates produced a four-sentence web post on this pressing matter.

It included a photo of a piece of paper taped on a door jamb, directly under the doorbell of the Panama Street home of Jill and Sheldon Bonovitz, who were said to be hosting a $1,000-minimum McGinty fundraiser, featuring special guests Rendell and Vincent Hughes. You can see the invite via this link. It’s pretty exquisite.

Anyhoo, the PAC noted that “eager supporters showing up to meet McGinty walked away disappointed – an ominous handwritten note left on the door of the fundraiser location simply read ‘The Katie McGinty Event Has Been Cancelled.’” 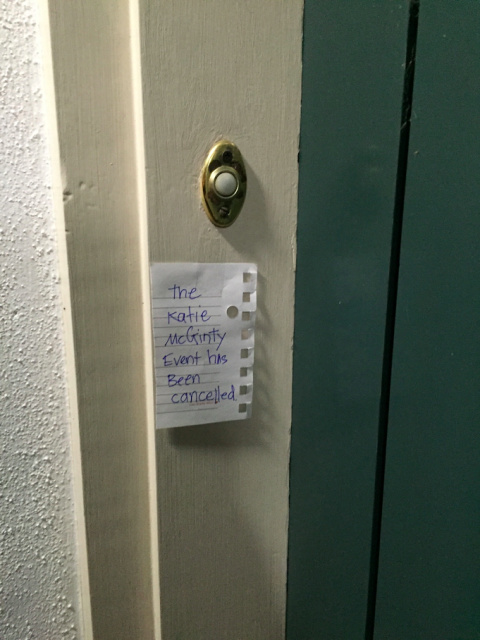 I wasn’t there, so I don’t know the depths of their disappointment. However, I reached out to the McGinty campaign on Friday to see how they planned to make amends for this travesty, which will surely define the primary.

McGinty communications director Sabrina Singh returned our calls within a half hour. She downplayed the fiasco.

“It was just a scheduling issue. The donors were notified ahead of time, so they knew it was being rescheduled ahead of time,” she said, unaware of the date on which the fundraiser will now be held.

In any event, McGinty and fellow Democratic senate candidates John Fetterman and Joe Sestak – whose campaigns did not immediately return calls for comment on FundraiserGate – will engage in a 90-minute debate at the Keystone Progress Summit at 6 p.m. Friday in Harrisburg. You can watch it on PCN.

We're told McGinty will definitely be there, FWIW.