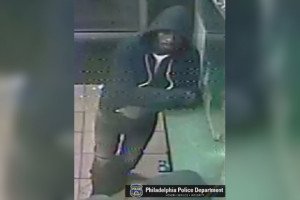 Philadelphia police are seeking the assistance of the public in tracking down this man, who law enforcement officials believe stole a hoverboard at gunpoint.

In the 1989 movie "Back to the Future II," Michael J. Fox travels to the futuristic year of 2015, where he gets involved in an entertaining series of events to further the plot, including stealing a hoverboard.

But the man wanted in connection with the theft of a hoverboard that occurred at around 10 p.m. on Oct. 5 at a Chinese restaurant at 3807 Pulaski St. in the city's Tioga section wasn't Marty McFly, police said.

According to police, a man armed with a silver handgun stole the hoverboard – actually a small Segway scooter that a rider operates by balancing on two wheels – after the suspect saw a person riding the futuristic mode of travel and decided to produce a gun.

In a statement that police released along with a surveillance video of the incident, law enforcement officials said the robbery occurred after the victim entered the business.

At that time, police say, the suspect, described as a black male, about 5 feet 6 inches tall, with a slim build and about 22-23 years old, was already inside the restaurant and left when he saw the hoverboard-style scooter.

The man, who was wearing a navy blue polo Ralph Lauren hooded sweatshirt at the time of the incident and is described by police as having a beard and a large “H” tattoo on his neck, went outside and retrieved a handgun from a silver Pontiac Bonneville, authorities said.

As can be seen in the video, the suspect, armed with the gun, then returned to the business and pointed the weapon at the man with the hoverboard as well as at others in the vicinity, officials said.

In the video, five or six victims in the restaurant can be seen turning over items from their pockets as the suspect waves the handgun, police said.

According to police, the suspect stole a black iPhone 6, a wallet containing identification and the lime green Segway hoverboard.

Police said the suspect then fled the store, put the hoverboard into the trunk of his vehicle and drove away.

Law enforcement officials said there were no injuries reported and no shots were fired.