How to craft the perfect holiday cheese plate 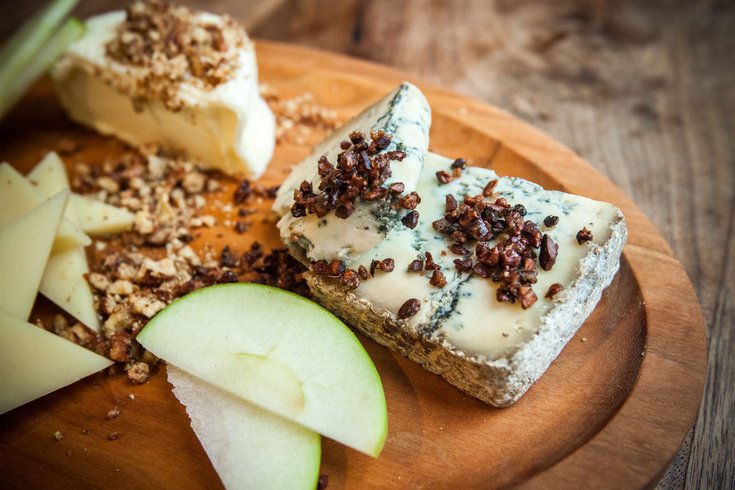 Birchrun Blue from Birchrun Hills Farm with candied cacao nibs is just one sliver of this cheese plate at Talula's Daily.

Prepping plans for your next holiday meal? Consider a cheese plate for an easy, edible entertainment piece. Whether it’s the star of the evening for a friendly gathering or simply a pre-meal app to your family’s feast, a board full of fromage creates lots of room for conversation. We spoke with Aimee Olexy, owner of the Talula’s trio (Garden, Table and Daily), about creating the perfect festive plate.

Choosing how many cheeses you'll need is, of course, the first step to planning out a plate. For an approachable board for both host and guest, Olexy recommends focusing on three, well-paired options.

“When you’re eating, you want to be able to taste everything individually, and you want the overall experience of the sum to be greater than the parts,” Olexy explained. “In an effort to take that to the cheese plate, I select cheeses that have a similar body that will also stand up to one another. I’m going to look for cheeses with a quality that matches quality and similar mouth feel.”

Olexy also suggests pairing cheeses that come from similar terroirs. “Keep in mind the principle of ‘what grows together goes together’,” she said. “So maybe you're choosing all three cheeses from within a French collection, or an Italian collection, or an American artisanal farm collection.”

As a starting point for a well-balanced holiday trio, Olexy recommends seeking out a milky, oozy soft-ripened cheese, a sharp, fruity, firm cheese, and a light tangy goat milk style.

“My first pick would be the Robiola Bosina. This mixed-milk cheese is a mushroomy and earthy alternative to brie. It’s an Italian classic from the Langa region and is traditionally served with a touch of salt and pepper and drizzled with olive oil."

Olexy also recommends the Margie from Sprout Creek Farm in NY's Hudson Valley and the Hummingbird from The Farm at Doe Run out in Chester County as other soft-ripened options.

As for something fruity and firm, Olexy suggests Beecher's Flagship Reserve from Washington State and Gouda from Fat Toad Farm.

"For a crowd pleaser, I'd definitely turn to BellaVitano. This cheese is inspired by Italian cheeses and is coming from Wisconsin. It's bright and fruity with a bit of crunchy, crystaline texture throughout. Their cheeses are soaked or rubbed with various treats including balsamic, black pepper, and espresso. I love the black pepper for its spicy kick," she said.

When it comes to goat milk cheeses, Olexy said, “I love Shellbark Hollow Farm’s Sharp Chevre. This West Chester cheese resembles everything pure and clean. It tastes like the freshest green grass and has a salty sharp kick. It's tangy but approachable and sure to be a favorite if drizzled with some nice raw honey."

Olexy has one golden rule to serving a cheese plate – never, ever serve it cold. “This is critical,” she said. “Cheeses are simply not meant to be eaten straight out of the refrigerator. It completely dampens their flavor.”

You can place each cheese on the same board on which you plan to serve them, unwrapped and with a cloche or piece of kitchen linen draped on top. Allow for at least an hour of tempering time before guests arrive.

“To me, it’s also a faux pas to serve anything on the plate that’s inedible,” Olexy said, adding you should remove wax-based or cloth-based rinds on any cheeses that have them. “It’s not because I’m worried about them eating something inedible, but guests aren’t going to get to taste the cheese the way the cheese-maker intended.” 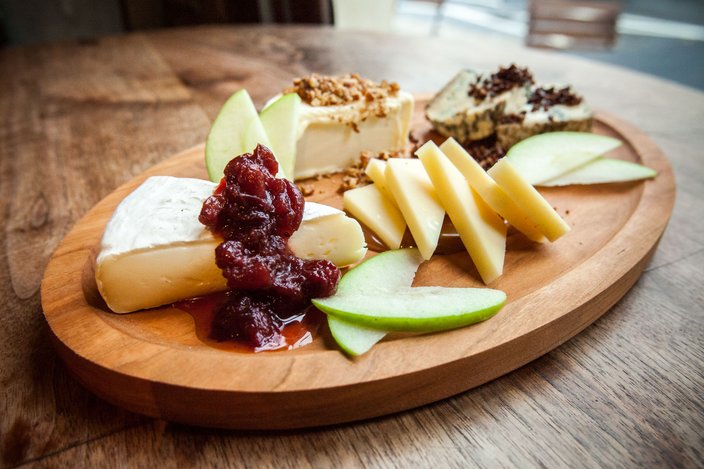 However, this doesn’t mean all rinds should be discarded, nor should you ever judge a cheese by its cover. Unless it's synthetic, nearly all rinds are safe for consumption and crafted with an intentional purpose that the maker wants you to experience.

You also might consider chipping and slicing each cheese into smaller pieces rather than placing a large hunk on the table. “I consider this part of getting the party started,” Olexy said. “If you break the cheeses down ahead of time, people can get into them faster and start talking about and tasting them.”

While honey is an obvious classic, Olexy said to be particularly mindful when placing it on the plate.

“The trend has been a little overly sweet in cheese-plate-building recently,” she explained. “Honey paired with cheese is a beautiful thing, but it’s really best with a honey that has some earthy and savory nature to it.” For instance, the honey bear you might use for tea isn’t as ideal as a farmstead variety. “It’s too sweet, and becomes overbearing to the savory flavor of the cheese,” she said.

Like with cheese, seek out a honey that expresses a unique terroir. Olexy recommends a darker honey, such as one with buckwheat, blueberry, or raspberry vine origins, or a non-filtered honey with a little texture. And take note – a little goes a long way. Drizzle, don’t drench, your board in its sweetness.

As for other go-to accoutrements, nuts are always a good option. Olexy suggests sprucing things up by toasting them beforehand, or choosing spicy, candied varieties. “I love pine nuts and pistachios, and nuts that feel a little out of the ordinary."

Cranberry sauce is also a great addition for the holiday season. Choose or create a chunky one with a hint of citrus to compliment creamy cheeses. For a fun surprise, seek out Parallel Bars from Eclat. The chocolate company offers unique flavors, such as porcini and thyme. “The coffee and cardamom bar is great to nibble on along with some vintage Gouda.”

As for crackers versus bread, there's no wrong answer as long as you steer clear of any flavored varieties. However, Olexy strongly encourages hosts not go overboard on this part. “You want people to eat the cheese, and taste it. The bread is the middleman,” she explained. “Maybe you nibble on it to cleanse the palette between cheeses, but most cheeses are made to have texture and should be experienced on their own.