How to navigate the cheese market: Finding your whey at Di Bruno Bros. 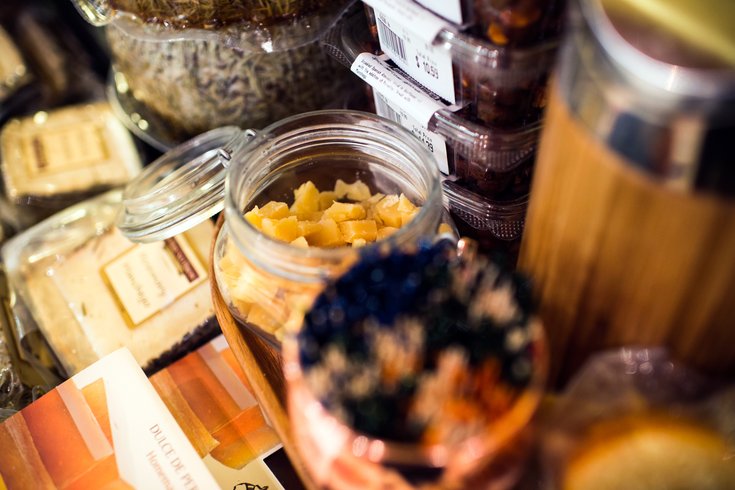 Cheese is kind of like dating: You have to try a lot of types to know which one is the perfect fit. Will a triple cream Brie go better with your palette? Is a pungent blue cheese the right fit for your food pairing?

There are plenty of varieties to taste, yet the endless number of options can sometimes feel intimidating. And we all know cheese isn't cheap. Sampling the whole dairy aisle can be pricey, and taking a chance on one, only to find out you dislike it, can be a huge disappointment.

Luckily, there are plenty of cheesemongers out there who would rather down a glass of spoiled milk than let that happen to you.

“We stand behind the counter all day, and eat cheese, and take care of cheese, and talk about cheese,” says Samantha Kane of Di Bruno Bros. “If you don’t know where to start, just come in and talk to us, because that’s what we’re there for. We love what we do, and we want to guide you.”

To get a head start, we asked Kane to provide us with some navigational tips, from her favorite fromage to figuring out the right questions to ask. Here’s a primer: 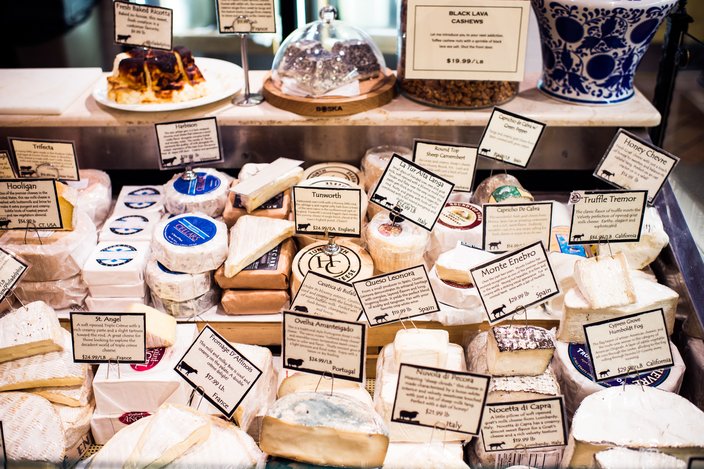 Choosing a texture – soft vs. firm: Cheese can be broken down into general categories. Di Bruno Bros. has 300 cheeses on display at any given time, so these categories come in handy to help organize it all. The Rittenhouse location where Kane works divides its cases into five main sections, starting on the right with soft cheeses and continuing into firmer territory. Fresh cheeses, pictured above, begin the case, and include varieties like Chevre, mozzarella and Burrata. These are followed by soft-ripened cheeses, such as Brie and various wash-rined styles, which then move into what’s known as the semi-firm/firm category. This section is the largest, and includes Gruyere, Comté, and other Alpine cheeses. Next are the firm/hard cheeses, with styles like Asiago and crystallized Gouda. Blue cheese, the final category, ends the case and defies the texture flow. It includes a mix of both hard and creamier consistencies. Having a category in mind can help quickly narrow your choices. 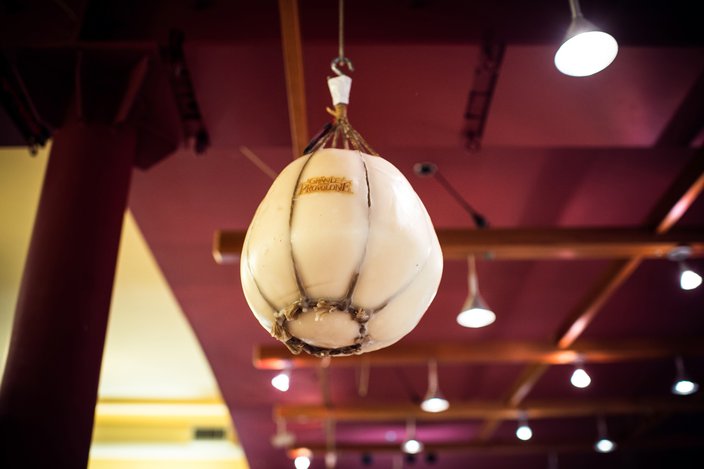 Selecting a strength: While picking out a texture is a great place to start, a cheese’s flavor profile is certainly just as important. Yet identifying its pungency isn’t always as easy to do on your own. Numerous factors play into a product’s flavor and aroma, such as style, aging process, the animal from which the milk is derived, etc. Kane, however, has several general rules to follow that will help in the buying process. 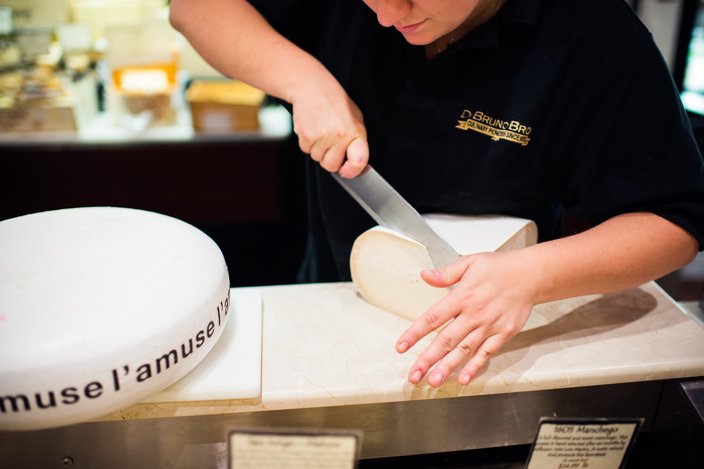 Make it mild, please: If stinky cheeses stifle your appetite, Kane suggests sticking within the fresh cheese category. “You’re never going to find a strong mozzarella,” she says. “It’s just not possible.” If you want to venture over into the soft-ripened arena, choose a cheese with a white rind, such as a Brie. Other rind colors can indicate a cheese is wash-rined, meaning it’s been bathed in a liquid such as saltwater, beer or wine during the aging process. This encourages bacteria growth, which lends funkier flavors. For a hard cheese, go for a Gouda, such as the goat’s milk Brabander pictured here. “Goudas are generally a safe starting point,” explains Kane. “They have a sweetness to them that makes them very accessible.” 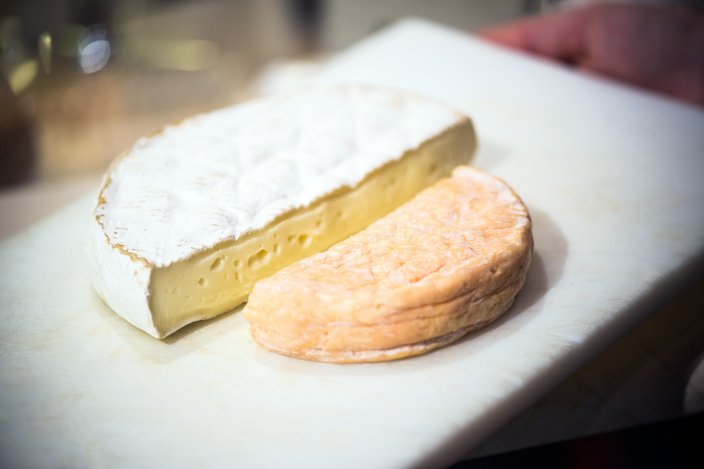 Let’s get funky: If you want to go bold, start by seeking out an orange rind, such as Jasper Hill’s The Wynd and the Willough, pictured on the right. As previously mentioned, this generally indicates the cheese is a wash-rined style, primed to create profound aromas and complex flavors created by bacteria growth developed from the moisture of the brine. Kane also strongly suggests asking the cheesemonger for a recommendation if you’re ready to truly take a walk on the wild side. 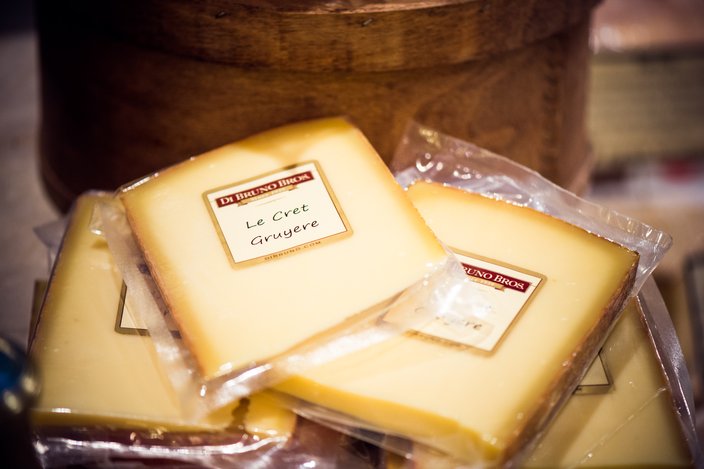 Baby steps - a (non-stinky) move from mild: Perhaps you’re ready to make a move from the mild category, and you’re feeling both excited and uneasy. In this case, Kane recommends reaching for Gruyere. The semi-firm style is still relatively mild in flavor but also holds notable nutty notes that are fun to detect and give it an oomph. 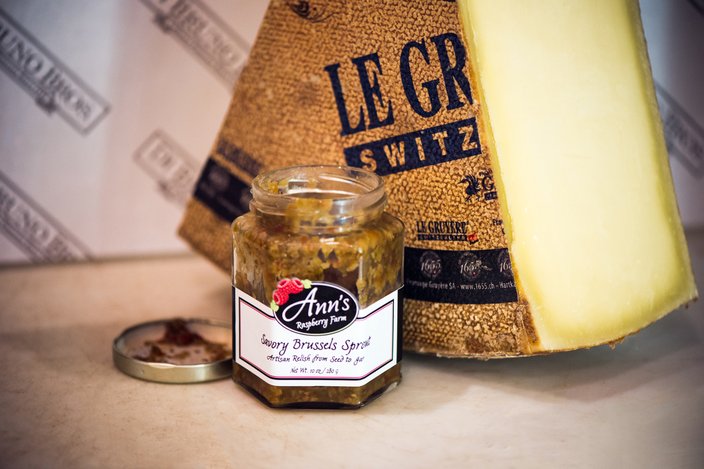 Kane’s favorite Gruyere (and current favorite cheese): “Cheesemongers view cheese kind of like you’d look at your kids,” Kane explains. “You’re not supposed to pick a favorite, but sometimes you secretly end up with one. For me, that’s currently the 1655 Le Cret Gruyere.” The Swiss cheese comes in 80-pound wheels, and is fruity up front with a nutty finish. Kane loves the crunchy crystals that speckle the inside of this cheese, which she recommends pairing with Di Bruno Brussels sprout relish or a whole grain mustard. 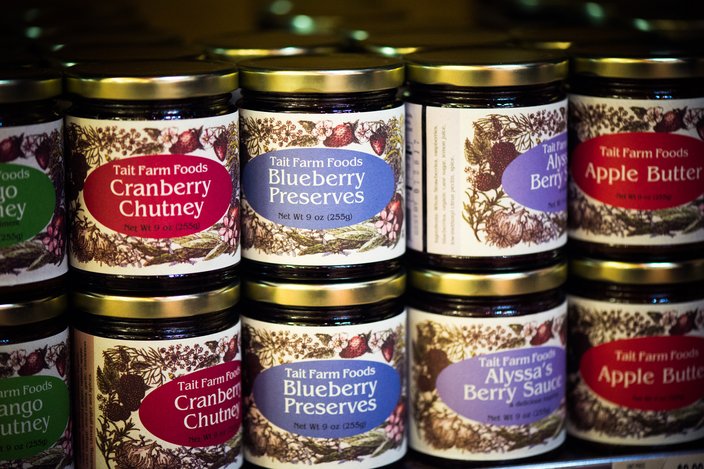 The perfect pairing: Sometimes a culinary pairing planned for a cheese can be a great navigational guide. Maybe you just purchased some cured meat or perhaps you intend to make a roasted veggie entrée for dinner. Even if you pick out the cheese first, it’s helpful to have a baseline knowledge of what pairs well. As Kane explains, “Pairings make cheese feel more satisfying.” She gives her recommendations for each category.

“For fresh cheeses, I think grilled vegetables or bread and honey. For soft-ripened, I break this category into two. Those on the mild side, I love with a sweet fruit in the summer or a blueberry jam in the winter. For stronger soft-ripened cheeses, I think mustard, Brussels sprout relish, or a pork loin. My go-to’s for the semi-firm/firm category are apricot butter, toasted nuts and Mostarda. With blue cheese, I really love pairing it beside a piece of dark chocolate or a dark-stoned fruit like cherries.” Kane recommends taking a spin around the store to see what local options they have, such as the Tait’s preserves, pictured above, which come from a small family farm just outside Penn State. 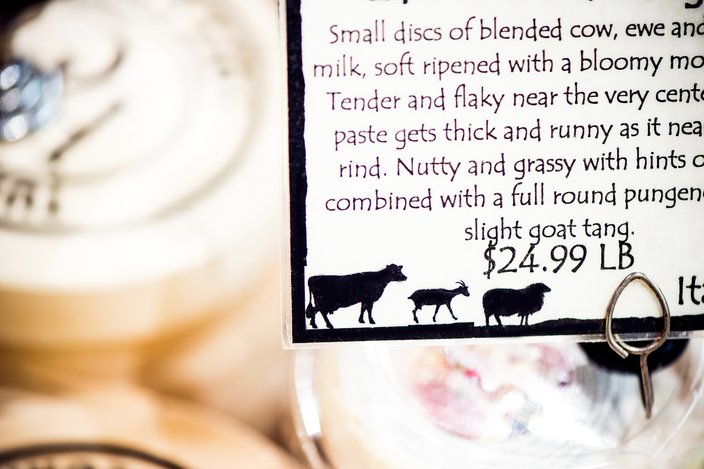 Goat, sheep or cow – is one milk better than the other? The aging process plays a larger role in determining a cheese’s flavor profile than its animal derivative. But Kane notes that each style has signature traits. Goat’s milk cheeses tend to be more acidic and tangy, while sheep’s milk cheeses are nutty and bready. “They have this toast-like taste,” says Kane, who explains that sheep’s milk has the highest fat content and is known to produce the most buttery of all the cheeses. As for cow’s milk cheeses, Kane says this sector contains so much variety that there are no real defining characteristics. “This is what makes cow’s milk cheeses so approachable,” she adds. “You can give someone a super biscuit-y cheddar, and if they don’t like it, you can reach for another cow’s milk cheese with an entirely different flavor.” 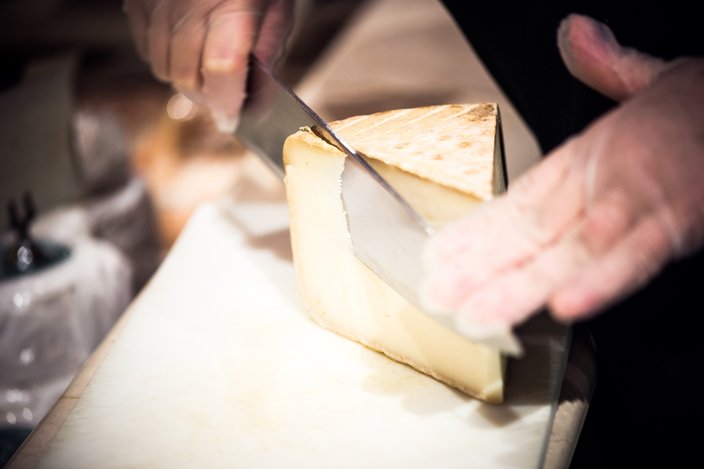 Kane’s go-to goat, sheep and cow’s milk cheese: Kane’s top pick for goat’s milk cheeses is the Brabander. She describes the flavor of this goat’s Gouda as tasting just like toasted brioche with a marshmallow-like finish. 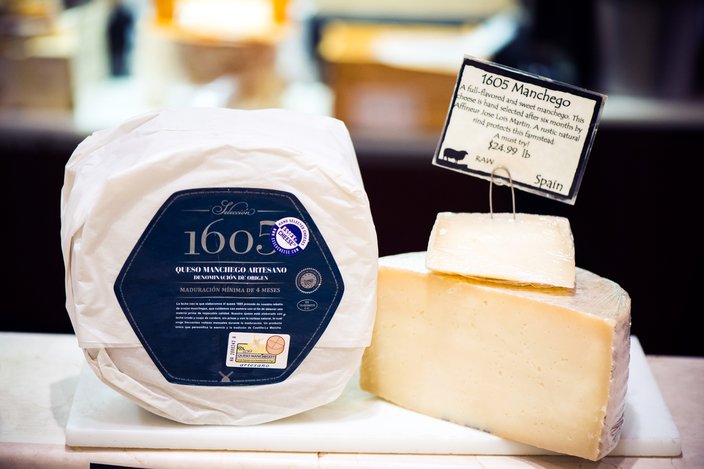 Her go-to sheep’s milk cheese is the Manchego 1605, a buttery crowd-pleaser produced from the only female maker of Manchego in Spain. 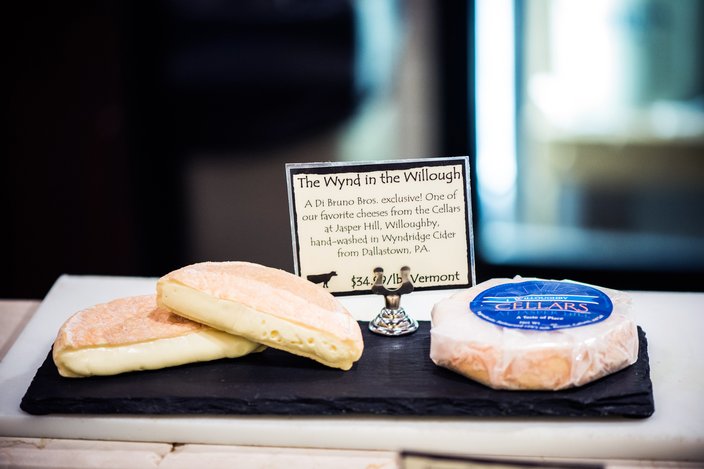 For cow’s milk cheese, Kane reaches for The Wynd in the Willough, a collaboration between Di Bruno’s and Vermont’s Jasper Hill. The medium-strength, Willoughby style of cheese is washed in hard apple cider for a crisp tartness and an autumn earthiness. 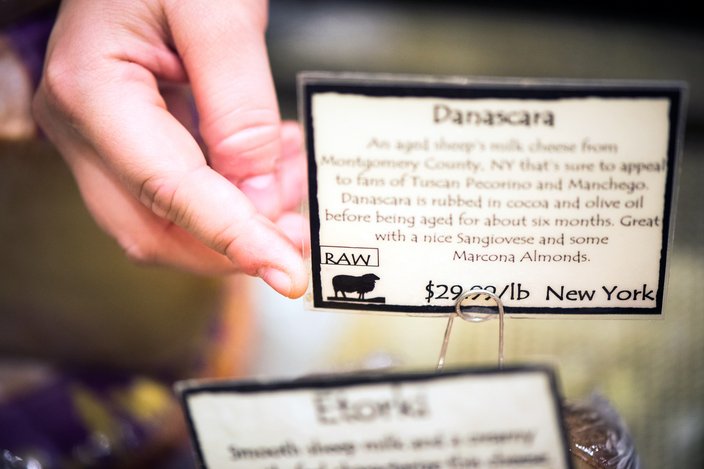 Reaching for a raw: “People have been making raw milk cheese for thousands of years, and some of the oldest recipes call for raw milk,” says Kane. Given this history, Kane believes a lot of the cheeses with the most complexity are raw because the artisans have had time to perfect the process of making them. That being said, the U.S. has banned the sale of raw milk cheeses aged less than 60 days due to concerns surrounding listeria – a pathogenic bacteria that poses a risk of contamination. If you want a raw cheese, Kane says skip over the fresh cheese section and go straight to the cheeses with longer aging times. As do most cheese shops, Di Bruno’s clearly marks all raw cheese as such. 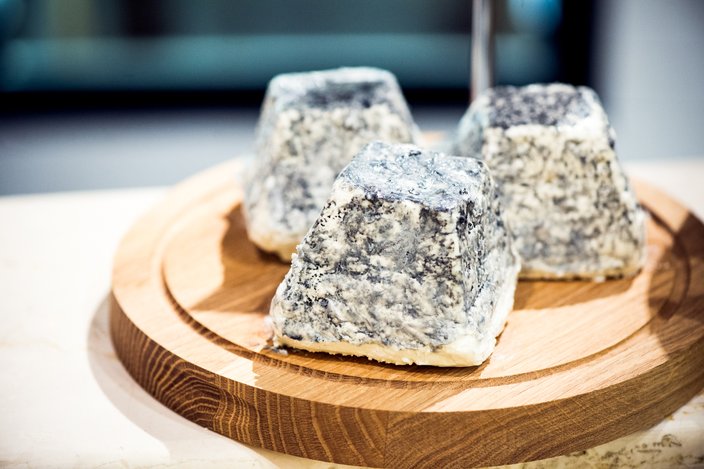 When to eat the rind: Although a multi-colored or moldy-looking rind, like in the French Chevre pictured above, can appear inedible, Kane confirms that as long as the rind is not made of wax or cloth, you should try it. “Even if you don’t like it, it’s an experience, and you simply don’t have to try that particular rind again,” she says. Rind flavors vary, depending on the environment and process in which the cheese is aged, but they are always going to be a little stronger and firmer than the cheese itself. “More often than not, the cheese-maker had an intent when crafting the rind, one that he/she would hate to see labeled as inedible,” Kane notes. 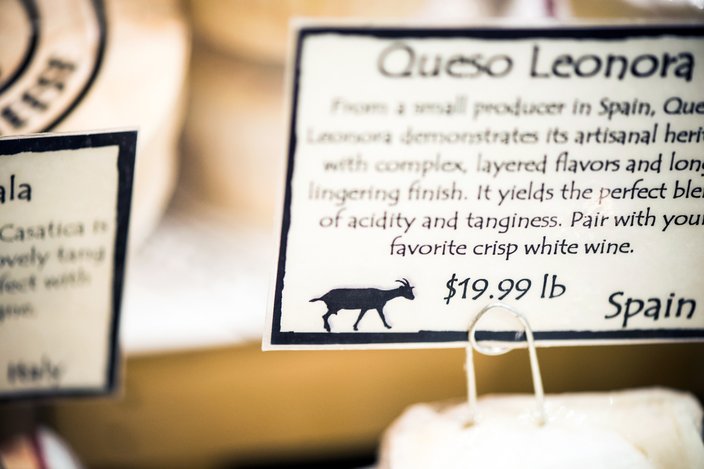 In search of the healthiest style: “Goat cheese is generally a bit better for you than others because goat’s milk has a lower fat content,” according to Kane. “That being said, everything in moderation!” 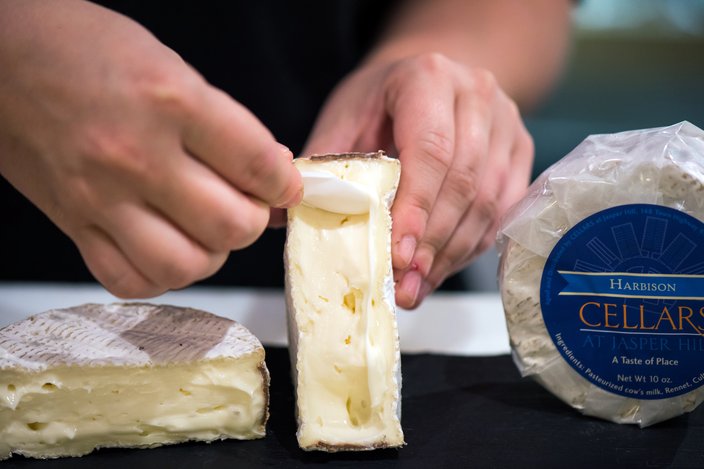 Finding the quintessential fall cheese: While it won’t be displayed until the end of October, the must-try cheese of the season is a Brie-like gem called Vacherin, Kane offers. This cheese is only made during the fall and winter months, when the Swiss cows switch from eating grass to hay. It is a wash-rined cheese with a classic orange rind, but is not overly strong in flavor. Kane describes it as a slightly more robust version of a Brie with an even “ooier-gooier” center. Until it comes in stock, Kane recommends Jasper Hill’s Harbison, pictured above, a slightly milder version of the Vacherin available year-round.