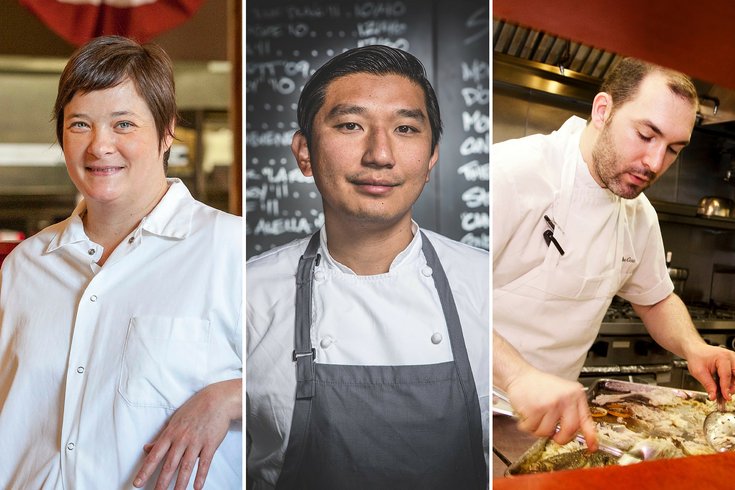 It’s Thanksgiving crunch time! PhillyVoice asked six Philly chefs for their best advice on common holiday meal quandaries. Their wise words will whisk you through the holiday like you're a Turkey Day pro.

“Do a lot of things ahead of time to make it less stressful,” advises chef Peter Serpico, whose namesake restaurant is offering Thanksgiving dinner for the first time next Thursday. “The whole point is to be with your family and friends and enjoy your time with them.”

Emilio Mignucci, a third-generation owner of Di Bruno Bros., agrees wholeheartedly. Each year he turns out an epic meal from his aunt’s small kitchen, seemingly without breaking a sweat.

In addition to turkey and traditional sides, highlights of his family’s “12-hour marathon of eating” are an elaborate spread of antipasti, a soup course, baked pastas with meats, a roast filet with gorgonzola sauce, fennel risotto and a tableful of desserts.

“It’s really about planning it out and being organized,” Mignucci said. “Do a little bit at a time and have it ready so you’re not stressed that day.”

A couple of weeks out Mignucci begins his prep work, such as making stock for the soup. All of the chopping is finished by the night before.

“On Thanksgiving Day I want to have time with my family and watch football.”

I don’t know how to deal with picky eaters.

Prepare something that you know all of your guests will enjoy, advises Serpico, who will feature his mom’s traditional mac and cheese on his restaurant’s first Thanksgiving menu.

“My brother and my sister are super picky. Mac and cheese was the one thing that my mom could make that everyone would eat, so that became the staple,” he said.

If your house is divided on a particular dish, seek out a compromise. Mignucci offers both red and white sauce with his baked pastas. “Some of the kids don’t like the red gravy so we do it two ways,” he said.

I have limited stovetop/oven space.

Fire up the outdoor grill, suggests Jon Nodler, culinary director at High Street Hospitality Group. “It’s a great way to keep things warm as you get everything ready.”

But it’s more than just an extra oven. “At a.kitchen we use the grill for everything on our menu,” he says, including the Thanksgiving-friendly rutabaga gratin.

“We bury the rutabagas in the embers and ashes and let them get really charred on the outside before peeling and pureéing them. They really showcase the flavors of the grill,” Nodler said.

“For stuffing, we grill potato bread with a little bacon and jalapeño,” he added. He also recommends grilled green beans and winter leeks; they reheat easily, or you can serve them at room temperature.

I’m not sure how to time everything.

“Sit down ahead of time and really think about what needs to happen in order to get all of the food on the table,” emphasizes Erin O’Shea, chef/partner at Percy Street Barbecue. “If you have a special dish that has to be sautéed right before it goes out, that requires your complete attention,” she cautions.

“Pull things out of the refrigerator and let them get up to room temperature before you put them in the oven,” O’Shea advised. “It speeds everything up and makes for more even warming.”

Though it may be tempting, resist the urge to peek in the oven. “Opening the door slows the process down,” O’Shea said. “And take into account that if your oven is packed, everything will take longer to cook.” 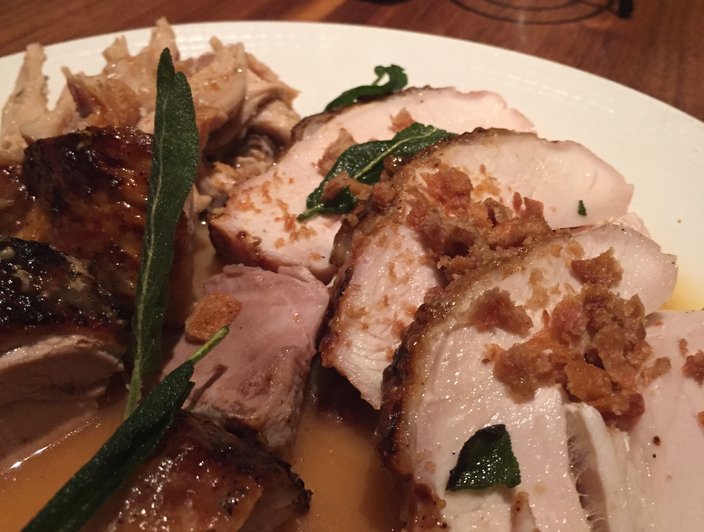 Peter Serpico has been testing Thanksgiving recipes for his restaurant to prepare for the big day. (Peter Serpico/Serpico)

“The biggest mistake when roasting a turkey is overcooking it,” says Joe Cicala, Le Virtù executive chef and chef/partner at Brigantessa.

“It cooks best when it’s deboned and cooked separately, but that gets a little technical and you lose that Norman Rockwell image of the whole roast bird on the table. My family usually gets two turkeys. One is a presentation turkey that we carve and the other we debone.”

O’Shea concurs that the worst sin is overcooking, but how can an inexperienced host be sure her turkey is done? Use a meat thermometer.

I have pie anxiety.

“Making sure your dough is completely frozen before you bake it ensures that it doesn't shrink as much and will hold its shape,” Monica Glass, corporate pastry chef at Starr Catering Group, said.

“This year I’m making pumpkin pie. I already made the dough and shaped it and froze it in my pie tin. I make the filling and bake it the day before so that it has enough time to set before I travel.”

Over-baking the pie is a definite no-no. “For a pumpkin or a custard pie you want to bake it until it’s still jiggly in the center. The residual heat will carry over and continue cooking,” Glass said.

“Pumpkin pie can be really dense and heavy so I thin it out with a little milk or heavy cream,” she added. “I make a pretty standard apple pie, but I put cardamom in the filling because I love cardamom with apples.”

My guests love dessert, but they have dietary restrictions.

“I have Celiac and I have to be careful myself, so I want to make everyone feel comfortable,” Glass said. She suggests a versatile fruit crisp.

“For the crisp that I’m going to make this year I’ll use gluten-free and certified organic oats,” she said. Go with coconut oil or vegan butter for a dairy-free version.

“For the filling I do pretty much the same as my apple pie filling, only instead of slices of apples I’ll do diced so it’s easier to eat. Very simple.”

For a Thanksgiving take on the classic tortellini en brodo, Cicala swaps mortadella and other meats for turkey.

“We take all of the leftover turkey and braise it down and make filling and then serve the tortellini in a turkey broth.”

If a simple, light lunch is more your speed, try Cicala’s turkey “carpaccio style.” “Slice the turkey very thin, then garnish it with pomegranate seeds,” he said. “Eat it as a cold antipasto with a little arugula salad and shaved Pecorino or Parmesan.”