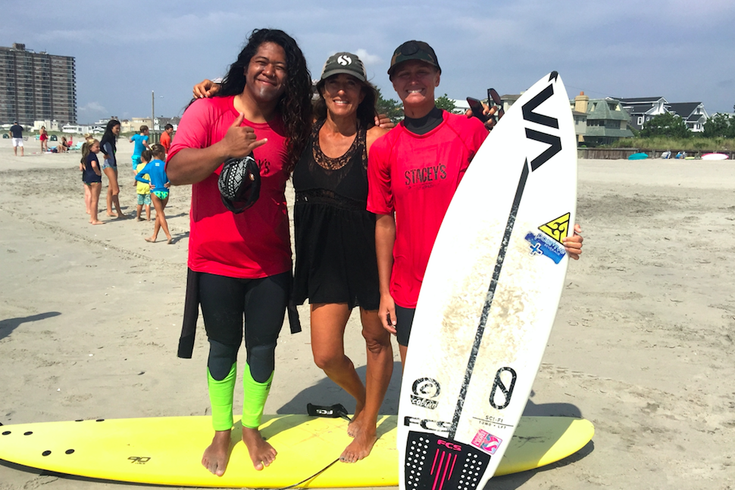 In 1999, a pregnant Stacey Marchel felt like the time was right for her and her family to move back home to the Jersey Shore from New York City, so pack up and return is what they did.

Her then-husband – also a shore local who was working on Wall Street – was going to set up a business in Margate, where they would raise a family as well.

The area was nothing new for them.

With a mother well-known in the shore real-estate community, it would be a homecoming of sorts. Things don’t always go as people expect – or want them – to, though.

After giving birth to the second of her two sons (now 18 and 20 years old), she moved from a career designing men’s clothing to opening a business with her best friend delivering flowers.

That business, and her marriage, would soon end.

Suffice it to say, Marchel sought, and found, solace in the water as those life-changing experiences sparked a transformation from surfing novice to owner of a surf-inspired shop, a camp for kids and lessons for adults in 2008.

This summer, she celebrates her 10th year of operating Stacey’s Surf & Paddle business and camp. The headquarters is on Amherst Avenue, not too far from Jerry Blavat’s Memories nightclub; the kids camp and adult lessons take place on Pembroke Avenue beach, about eight blocks away from Lucy the Elephant.

'I JUST GOT HOOKED'

On Monday – the day before she’d take her youngest son south to attend the University of Miami – she talked about the path she’s taken to this point in life, the joy brought to many people by the camp and the physical and mental health benefits of the sport and life in general.

Surfing wouldn’t really arrive on Marchel’s scene for a few years after returning to Margate. When her young son Spencer said he wanted to learn, she would just watch from the beach or head out to catch a few waves with him.

“Anybody who knows me knows I’m better off now. I needed all this to happen." – Stacey Marchel, owner of Stacey’s Surf & Paddle shop and camp in Margate

“I was always friends with surfers growing up, but didn’t do it myself. I was the type who didn’t want to get my hair wet,” she said. “When he started surfing, I figured, ‘why not?’ I was out of the fashion world. My attitude changed. I just got hooked.”

When she walked into a local surf shop, she told them that she thought she could get enough people together for lessons. She recalled them somewhat laughing her off.

The initial intention was to get women into the water so she'd have some friends out there on the waves, Marchel said. That July, she did just that and about 30 people showed up.

It’s just kept growing from there, with Marchel estimating some 600 “moms and groms,” the latter is a term for young novice surfer, taking lessons from some 40 camp instructors.

As fate would dictate, her marriage would also end that year.

“Surfing got me through my divorce,” she said Monday. “The strength that it takes, the serious life lessons it teaches. Surfing is a lot like life itself.” 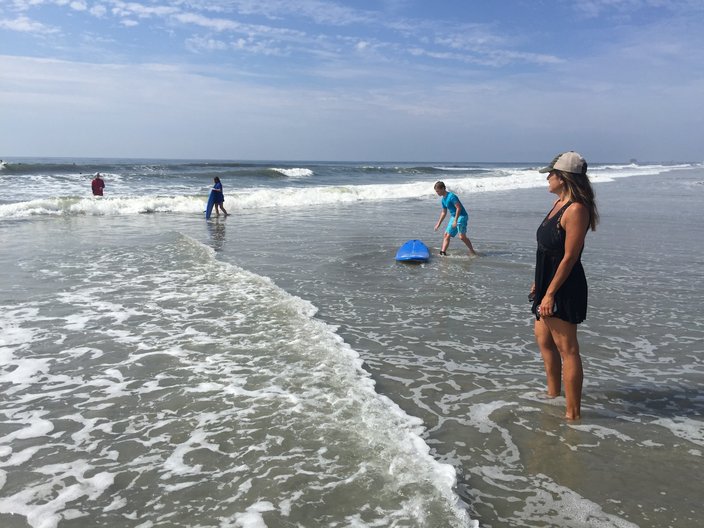 Stacey Marchel started Stacey's Surf Camp in Margate, N.J. 10 years ago. She said surfing, and the camp itself, helped her cope with a divorce.

Over the years, she’s built a business that requires her to work seven days a week through the summer. She also sells real estate in the winter.

“My mom always says I can sell just one property and not have to work all summer doing this,” Marchel laughed. “But, this is magical. Even if you get beaten up out there by the waves, the salt water cures everything. You always feel better out there and when you come back in.”

She goes out of her way to hire as many female instructors as she can so young girls see that it’s not just a sport for boys. They can see that up close in one of the camp’s senior instructors, Cassidy McClain, a professional surfer from neighboring Ventnor. (And McClain says this is a great job that lets you see the joy on children’s faces.)

“It’s important that they see women out there,” Marchel said. 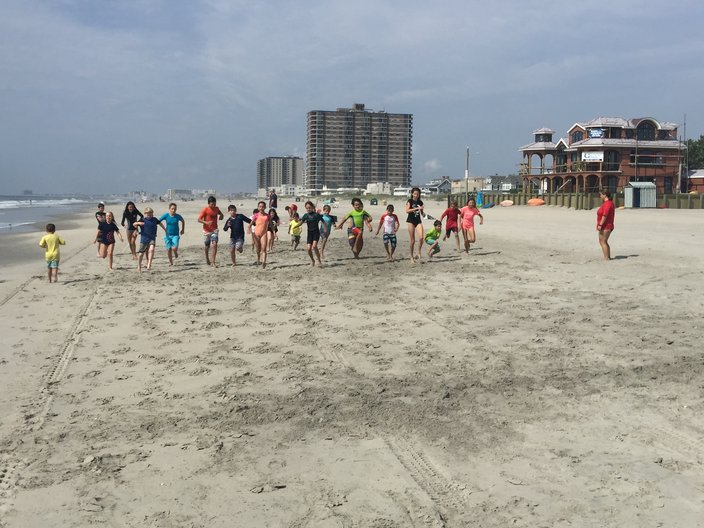 Kids at Stacey's Surf Camp play a round of 'Land, Sea and Sky' during a break from riding waves on Monday, August 14, 2017.

To accentuate the health benefits of surfing, the camp integrates yoga into its pre-surf regimen since flexibility is key. Surfing, she said, brings about a healthy lifestyle and is mentally cleansing as you leave the worries of the world back on the sands of the beach.

“When I was in New York, clothes, shoes, those kind of things mattered. Different things were important to me,” she said. “Now, this makes me happy. I don’t need ‘retail therapy.’ It’s a slower pace and nature is a gift.

“Anybody who knows me knows I’m better off now. I needed (the divorce and discovery of surfing) to happen. Life is more meaningful when you can help people, have staff that feels like family, see the happiness that it brings these kids. A lot of the kids in the advanced camp now started with me when they were four years old. It’s amazing to watch.”

Standing out on Pembroke Avenue Beach – as I did when my son enrolled in the camp last week – you can see Marchel’s words play out in action. Some kids take to the waves instantly. Others face down their fears as the young instructors guide them at their own pace.

For Marchel, it’s those images that leave her in a happy place, despite the realization that her mom has a point about how a single real-estate sale could cover the income derived from spending all that time on the beach.

It’s just that she found her proper path and isn’t about to leave it.

“You need to be willing to try new things,” she said. "I didn’t know that that first lesson would change my life. It happened because I was willing to put myself out there.

"This year’s slogan is ‘Sign up. Show up. Stand up.’ That’s not just about surfing. You have to do that in life to find happiness, too."

And find that Marchel clearly has.