How do the new Eagles look: Defense edition 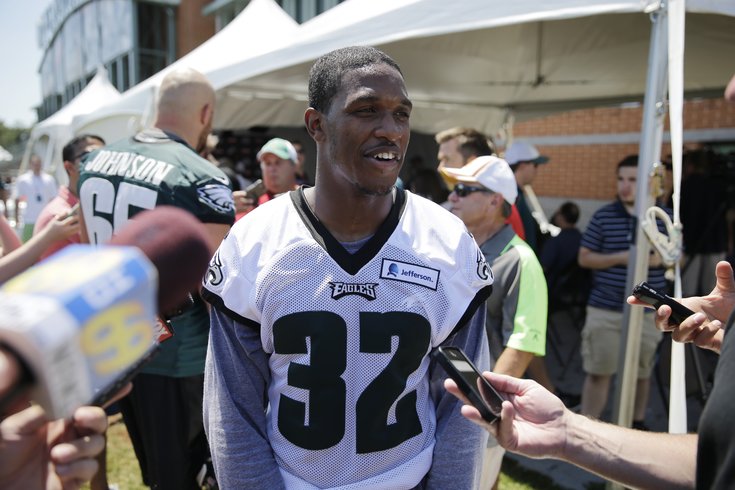 Eric Rowe is pushing Nolan Carroll for a starting job on the outside opposite Byron Maxwell.

The Eagles now have a few sets of OTAs, a minicamp and the first seven days of training camp in the books. After having watched well over double-digits practices at this point, let's evaluate how some of the new players look so far. Over the weekend we looked at the offense. Today we'll look at the defense.

• Byron Maxwell: As we said in Sunday's notes, I don't know if Maxwell is going to live up to the big contract he signed this offseason, but there's no doubt that he's an upgrade over what the Eagles had on the outside at corner a year ago. He's deceptively fast for his size, he closes quickly on receivers coming out of their breaks, and his ball skills are very good, as he has gotten his hands on a lot of passes.

• Eric Rowe: Rowe has had a few nice moments. He had a close-range INT in minicamp, and an impressive diving pass breakup in Sunday's practice. He has certainly flashed athleticism at times, and the Eagles have spoken well of his intelligence. I would have liked to have seen Rowe make more plays than he has so far, but he has not stood out in a negative way either, which is especially good considering he has played against the first and second team offense.

• JaCorey Shepherd: We covered Shepherd in depth earlier during camp, but the Cliffs Notes version is that the coaching staff loves him. We'll hold off talking further about him until more is known about the injury he suffered in Sunday's practice, but it doesn't look good. The Eagles reportedly fear he tore an ACL.

• Randall Evans: There's no way to sugarcoat this. Evans simply hasn't been very good. He's been beaten by Eagles wide receivers with regularity, and has been the biggest offender of pass interference and holding among the defensive backs. Even with JaCorey Shepherd potentially suffering a season-ending injury, I would slate Evans for the practice squad.

• Denzel Rice: Rice has been the surprise standout player at Eagles camp, as he has gotten his hands on a lot passes and been generally disruptive in the secondary. I'd like to see Rice get more reps against the big boy receivers on the first or second team offense.

• E.J. Biggers: To be clear, I haven't specifically watched Biggers much so far, but with Shepherd down, that will change. I will note than on more than a few occasions when I've tried to locate the defensive back beaten on a coverage, it has often been Biggers.

• Walter Thurmond: I think we can go ahead and call Walter Thurmond the Eagles' starting safety opposite Malcolm Jenkins at this point. He has been terrific. The Eagles like their safeties to be able to drop down and cover receivers in the slot, which Thurmond has demonstrated during camp and throughout his career as a slot corner. But where he has been really impressive is his awareness on the back end. Thurmond always seems to be around the ball, which is exactly what you want from a safety. In Sunday's practice, Thurmond had two interception of the "right place right time" variety. He looks the part. The one thing we cannot evaluate at this point is Thurmond's tackling ability, which we haven't seen from any Eagles yet this offseason, but Thurmond's ability to wrap up will have heightened importance because it is somewhat of an unknown.

• Jerome Couplin: Technically, Couplin was on the team last year, but nobody has seen him play, so we'll include him here. Couplin hasn't stood out in a positive or negative way, which isn't the worst thing from a safety, really. He missed time after having an appendectomy.

• Kiko Alonso: Again, as noted under Walter Thurmond, the Eagles aren't tackling, which is kind of an important thing for an ILB. That's not a concern for Alonso, who was a tackling machine his rookie season in Buffalo, when he had 159 tackles. The big question for Alonso is how he looks after tearing an ACL during the 2014 offseason. So far, he looks like a big, athletic dude who can do anything you ask of an ILB. Alonso is currently out with a concussion, but defensive coordinator Bill Davis said he'll be fine.

• Jordan Hicks: Hicks has flashed athleticism at times, and the coaching staff has noted that he has been good in special teams drills, unlike LB Marcus Smith a year ago.

There really isn't much to see here yet. There has only been a small handful of practices in which the Eagles were in pads, and even then, there isn't a lot to evaluate. We'll get a better look at new guys like Brian Mihalik and some of the undrafted free agents in the preseason games.