Another December to remember? How the Eagles can make the playoffs 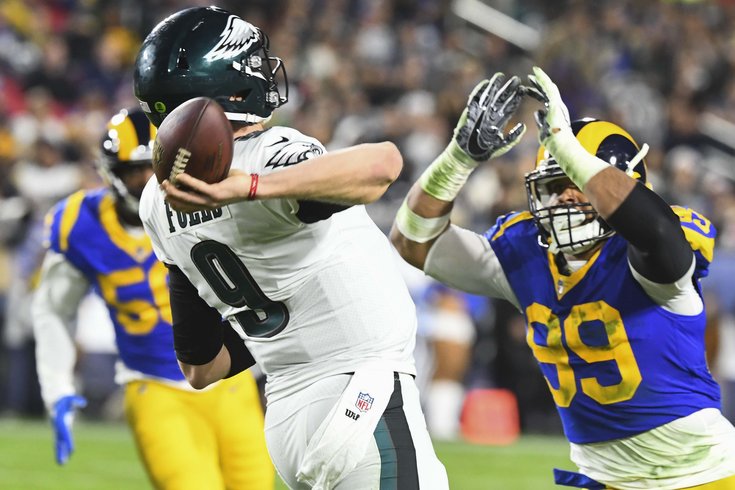 Philadelphia Eagles quarterback Nick Foles gets off a pass before getting hit by Los Angeles Rams defensive end Aaron Donald during the first quarter at Los Angeles Memorial Coliseum.

As sure as presents appear underneath the tree, Nick Foles made his yearly trip onto the gridiron as Philadelphia's almighty football savior again this December.

Sunday night in Los Angeles, Foles somehow saw open receivers, and aggressive play-calling turned the clock back one year to save the Eagles' playoff lives. The defense stepped its game up as well in the 30-23 victory.

There is still a lot that needs to happen for Philly to even give themselves a chance to defend their title, but it's a lot easier to follow now than it was even a week ago.

However, they do not control their own destiny. They only would own one tiebreaker — against the Redskins should each team be 8-8, which means they still need help.

Here's a look at what needs to happen for the Eagles to continue an improbable run to the playoffs:

Eagles win EITHER at home vs. the Texans or on the road against the Redskins to get to 8-8

Panthers lose EITHER of their final two games vs. the Falcons and Saints

So, that's not hard right?

We've skipped over what the Seahawks need to do — as at 8-6 they can still conceivably finish at 8-8 with games against the Chiefs and Cardinals remaining. However, with a potential playoff spot on the line in Week 17, Seattle has a high likelihood of making the postseason.

According to fivethirtyeight.com, Philadelphia improved their playoff chances from 15 percent to 39 percent. They also have a five percent chance of winning the NFC East.

After seeing what Foles and the revitalized defense was able to pull off to shock the world in Los Angeles Sunday night, I suppose anything is possible. So get your rooting hats on, dust the dog mask out of its box in the cellar and grab those Nick Foles novelty shirts out of your closet.

It's December in Philadelphia once again.