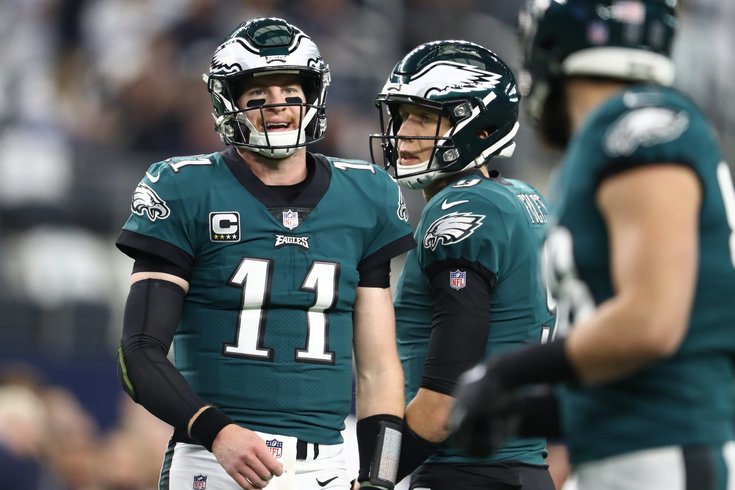 Carson Wentz's season should be over.

Philadelphia Eagles quarterback Carson Wentz has a fractured vertebra, according to multiple reports. Adam Schefter of ESPN notes that the injury isn't career-threatening:

A recent CT scan on Carson Wentz’s back revealed a fractured vertebrae that, if allowed time to rest, would fully heal without further expected issues, sources tell ESPN. There will be a continued evaluation to determine if continuing to play this year will make injury worse.

Schefter notably reported that Wentz will have further testing done to see if Wentz can return to the field in 2018, which seems like an asinine idea, given that the Eagles' chances of making the playoffs are slim-to-none, and even if they miraculously got in, they look nothing close to Super Bowl contenders.

The first report of Wentz's fractured vertebra came from Jason Myrtetus of 97.5 the Fanatic, who added some cryptic notes to his report:

Source: Carson Wentz has had a fracture in his back but was not made aware of the results of the scan. Some players are aware of the situation and what I am told this has caused a huge issue internally.

Myrtetus' comments obviously could use a little more unpacking.

Wentz's back issues are nothing new. He was listed on the Eagles' injury report both in Weeks 7 and 8 with a back injury. It is unknown if he has been playing with a fracture in his back for the last two months. With the number of injuries the Eagles have sustained -- and a number of examples of players returning to the field too quickly -- it's fair to have serious concerns about either the medical staff, or the Eagles' willingness to allow injured players to play, or both. That's the downside.

If you're a silver lining kind of person, Wentz's back injury might help explain his dropoff in play this season. As we all saw in 2017, a huge part of Wentz's game was making plays with his legs, whether that be running with the ball, or extending plays and making highlight reel throws on the run. He did that early in the season in 2018, but not so much of late.

In the four games before Carson Wentz's back injury appeared on the injury report, Wentz ran 12 times for 58 yards. In the 7 games after that point, he ran 22 times for 35 yards.

Doug Pederson is scheduled to speak with the media on Friday morning. Obviously, he is going to face very difficult questions about this situation.