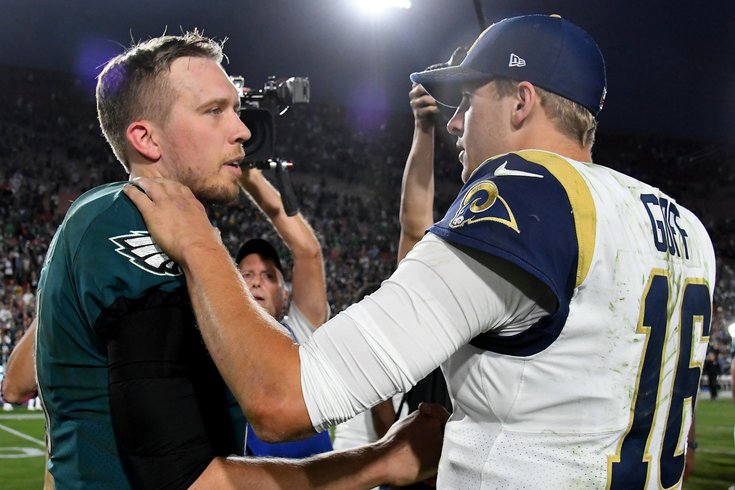 Remember when the Eagles were good when they went to L.A. last year?

For the gambling degenerates, here are my Week 15 NFL picks. To note, the team logos indicate who I think will win the game, not cover the spread. At the end of the picks, I'll note a few teams that I like based on the spread.

Chargers at Chiefs (-3.5): This is an awesome Thursday night matchup, and must see football TV. The Chiefs have the best record in the AFC at 11-2, and the Chargers are next in line at 10-3. The Patriots and Texans are both 9-4. Whoever wins the AFC West is likely to earn home field advantage throughout the playoffs. Should the Chargers win this matchup, the Chiefs would still hold the tie-breaker over the Chargers on the strength of a better divisional record. (The Chiefs won an early-season matchup against the Chargers.)

This could be a preview of an AFC divisional round playoff game, in which the Chiefs would get screwed by having to play the second-best team in the conference. It's never easy for poor Andy Reid to get to the Super Bowl.

Texans (-6) at Jets: The Texans had their nine-game winning streak snapped last Sunday, but they should get back on track against a bad Jets team.

Browns at Broncos (-3): It's mind-boggling that Hue Jackson started Tyrod Taylor over Baker Mayfield to start this season.

Cowboys at Colts (-3): The Cowboys are in sort of a weird position, in that they have the division wrapped up but they have almost no shot at a first round bye. In other words, their next three games are kinda meaningless. Will they lose their edge?

Packers at Bears (-5.5): The Bears have the NFC North all but wrapped up, but unlike the Cowboys above, they still have an outside shot at a first round bye.

Buccaneers at Ravens (-7.5): The Ravens have a chance to overtake the Steelers in the AFC North with a win over the Bucs and a Steelers loss to the Pats.

Cardinals at Falcons (-8.5): I had the Falcons winning the Super Bowl. If the season ended today, they'd have the fourth overall pick.

Titans (-2.5) at Giants: The Giants have actually won four of their last five games, wrecking their draft position. However, let's not start pretending that's a good team all of a sudden.

Dolphins at Vikings (-7): The Vikings are trying their damnedest to not make the playoffs, but the rest of the slop competing for the six seed in the NFC doesn't seem to want it either. We'll take the Vikings to win here, but it's hard to understand how this line is seven points.

Redskins at Jaguars (-7): The Jags are a bad team, but I'd bet hard against the Redskins until Vegas figures out that they're the worst team in the NFL right now, who should be double-digit underdogs against almost any team in the league.

Seahawks (-4) at 49ers: Even with a win last week, the Niners are still in position to have the No. 1 overall pick in the 2019 NFL Draft. The Seahawks, meanwhile, can clinch a playoff berth with a win.

Patriots (-2) at Steelers: Many will call this a rivalry game, but is it really a "rivalry" when one team completely dominates the other? Tom Brady has owned the Steelers over his career, winning 8 of 10 games against them, with 25 TDs vs. 4 INTs, and a passer rating of 111.8.

Eagles at Rams (-11): Eagles players have been dropping like flies all season long, with the following players all on injured reserve (starters in bold):

They'll also likely be without LB Jordan Hicks and DT Timmy Jernigan on Sunday. Oh, and, you know, Carson Wentz.

The speed that the Rams possess at receiver presents an extremely difficult matchup for the Eagles' corners, particularly the speed-challenged Rasul Douglas and the obviously injured Sidney Jones, if he even plays.

In my opinion, the Eagles are less likely to win this game than they are to lose by 30.

Saints (-6) at Panthers: I've said it every week for about a month and half, so I may as well remain consistent -- The Panthers are frauds.