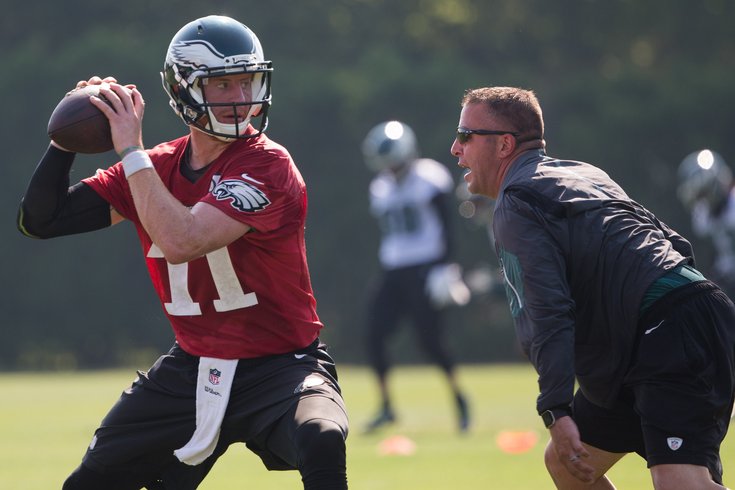 John DeFilippo is widely credited with helping the development of Carson Wentz.

The Minnesota Vikings have fired John DeFilippo, less a full season after hiring him to become their offensive coordinator. Ian Rapoport of NFL Network was the first to report the firing, and soon after, the Vikings made the move official.

John DeFilippo has been relieved from his duties as offensive coordinator.

Kevin Stefanski has been elevated to Interim Offensive Coordinator and will handle play-calling duties. pic.twitter.com/bI30IP3OV0

In recent weeks, while not mentioning DeFilippo specifically by name, Vikings head coach Mike Zimmer bemoaned DeFilippo's play calling. That criticism ramped up after the Vikings' loss to the Patriots last week, when Zimmer passive aggressively pinned the Vikings' offensive struggles on DeFilippo for not running the ball to Zimmer's liking.

“What do you think you need to do to get the offense back to rolling a little bit better?” Zimmer was asked by reporters.

“Same thing I have been saying all year,” Zimmer said.

“Do you think you ran the ball enough?”

A 21-7 loss in Seattle Monday night was the final death blow for DeFilippo.

When DeFilippo was hired in Minnesota, that job looked great at the time, with Zimmer concentrating on his defense, and DeFilippo being able to run his own offense. However, it appears as though Zimmer attempted to micromanage DeFilippo into operating a run-heavy offense, despite passing game talent that included Adam Thielen, Stefon Diggs, Kyle Rudolph, a good pass-catching back in Dalvin Cook, and a $28 million/year quarterback. The run game, meanwhile, is currently ranked in the bottom 10 of the NFL in yards per carry.

During his tenure in Philadelphia, DeFilippo was valued by the Eagles, so much so that they didn't permit him to interview for a job with the New York Jets to become their offensive coordinator after the 2016 season. DeFilippo is widely credited with helping quarterback Carson Wentz develop, as well as for his mid-week red zone game-planning.

It will be interesting to see if the Eagles attempt to bring DeFilippo back to Philadelphia, and if so, in what capacity.