Halloween is merely two weeks away. This being Philadelphia, one would hope – nay, expect – a lot of folks, both young and old, to dress up like Gritty at their upcoming costume parties. This is the natural course of trend-setting events.

With Gritty’s late arrival on the world stage, however, pre-made options aren't readily available for the masses who want to celebrate – and behave like – the Flyers new mascot.

RELATED: Worst Halloween costumes of 2018 so far – from Kardashians to 'sexy' handmaids

We got your back, folks.

Sure, Northeast Philly seamstress named Pattirriccia Ryan received quite a bit of attention for creating a costume for her young daughter, but we’re going to expand beyond just celebrating her accomplishment.

We at PhillyVoice decided the time was right to compile and share a Do-It-Yourself Guide to create a Gritty costume of your very own. We reached out to costume designers, yarn experts, furries and even former mascots to get all you’ll need to know to make your Halloween grit-astic.

With no further ado, here’s everything you’ll need, and what you’ll have to do with it, to be at your Gritty best.

From Gritty’s head down to Gritty’s toes, there are a bunch of items you’ll need for the costume beyond the glue to affix his crazy eyes to your dome, and needles, thread and miscellaneous items  to sew and/or keep the costume together. Luckily, you may already have most of them:

You knew this was coming: Someone has written Gritty fan fiction

Black helmet. If you want to stay truer to Gritty form, a hockey helmet (sans shields or decorations) is the way to go. There are options in the $39.99 range on PureHockey.com, with other options available via Modells and Dick’s Sporting Goods. Of course, it doesn’t necessarily need to be a hockey version for Halloween; bicycle helmets work as well. Heck, you may already have one. ($0-$40)

Giant googly eyes. Plastic googly eyes are available via most online retailers, including these for $4.99 and these for $9.99. They're the rug that holds the room together. These are a must. Alas, there don’t seem to be many out there in Gritty’s orange-and-black mold, and monstrous diameter (but for these that are meant for a wall but could conceivably be costumified). In the how-to section below, you can learn how to make them on your own, as well. ($5 to $25)

Flyers jersey (orange and white version). If you’re looking to have a garment you can wear to, say, a Stanley Cup parade on Broad Street, NHL.com has jerseys available for $135.99. It’s too late to go the overseas-knockoff route, but there are some cheaper options available here in the states as well. Don’t want a jersey? Well, you can always go the shirsey route, but Gritty will notice the lack of continuity to your get-up. ($0 to $200)

Black hockey gloves. These are optional, as Gritty has been seen in public with and without protected hands. Heck, oversized black work gloves would even do the trick. ($0-$50) 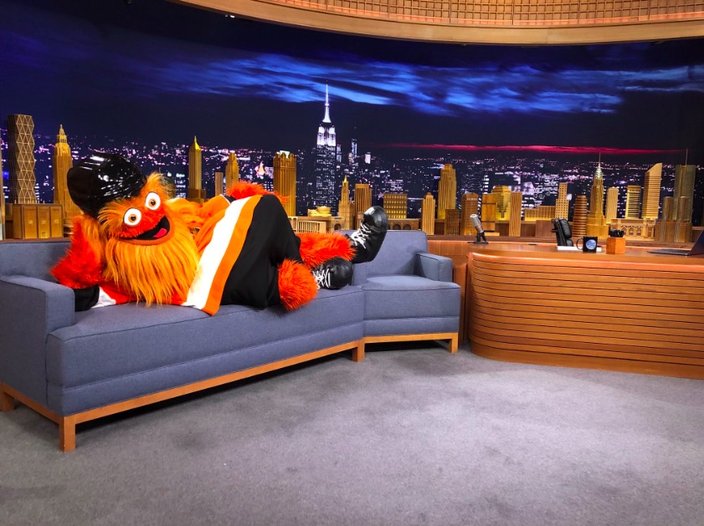 The Philadelphia Flyers' new mascot Gritty made his TV debut on “The Tonight Show with Jimmy Fallon.”

Black pants. Gritty wears hockey pants, which is his prerogative. They’ll set you back 30 or 40 bucks for a product you’ll never again wear unless you take your admiration of the mascot to Furry Convention levels or fan-fic replications. Regular black shorts – dare I say jorts as well? – will do. You probably already have those. If you don’t, there’s a big-box store within distance to wherever you may be, one would hope. ($0 to $60)

Novelty shoes that resemble skates. Let me preface this by saying in no way, shape or form is Gritty to be confused with a clown. That said, oversized clown shoes can fill this role in the costume. Like these ones for about $15 or these for a shade over $32. Maybe rubber overshoes appeal to you? Or any sort of black shoes or boots that you likely already have will do. ($0 to $32)

An orange head, arms and legs. This is where things get tricky if you aren’t a costume designer or seamstress, but luckily for kids and adults aspiring to reach peak Gritty worship, we talked to a bunch of them for you.

HOW TO MAKE THE MOST COMPLICATED PARTS

All that above was the easy stuff. Now let's try to simplify the rest of costume.

Existing items. PartyCity’s orange furry leg warmers – while designed for your knee-to-ankle region – could also be worn as arm fur in an emergency. They’re $19.99 each a pair, so you’d need to drop around $40 to make it happen.

Sew it yourself. Want to make it on your own? “Long pile orange faux fur” is a good option if you’re talented with a sewing machine. The good folks at Jack B Fabrics (and others) on Fabric Row have orange felt at $7/yard and white fur (which you could dye orange) for $30/yard.

The good people over at A.C. Moore at Broad and Chestnut sell several orange threads which can be sewn into a sweater (for the arms) and pants (for the legs).

Paper-mache head. Virginia Phillips, a union costumer for film, television and theater productions, recommended wearing orange garments and going with a paper-mache head. You’d need a big balloon, gauze and Elmer’s (or other) glue to get that going. (There are several links online to walk through that process; see here, here, here and here).

As for the garments, Gritty lacks smooth skin, as there’s some wavy flair to it as well. That can be replicated with cotton parts of an orange mop hot-glued or sewn onto the sleeves and legs.

Other approaches for the complicated head. Richard Killeaney, fashion design instructor at Moore College of Art and Design, said fake orange fur is the best way to approach the costume’s body. He warns, however, that it’s starting to sell out at places around town, including on Fabric Row.

• Buy the fur in precut lengths.

• Wrap it around the arms and legs to see where it overlaps.

• Get a long-sleeved T-shirt and hot glue, or lightly stitch it, to the arms and legs, but only after you see how it fits. “The problem with fake fur is that it could melt, so run a line of hot glue to glue one piece in place and see where the overlap happens,” he said. “Take it off and trim down the fur on the overlap with scissors.” You can also use a hand-sewing needle and thread, or “baste stitch” by hand.

• “Trying to get it over your hands will be a pain in the butt, so I recommend using gloves."

• Wrap it like a sleeve or leg warmer and glue in place.

He conceded that the head is the most difficult aspect of the costume, but had a unique suggestion: orange cheerleading pom-poms to mimic the hair.

For the face, Killeaney suggested a dollar-store visit to buy a large salad bowl that would fit over the wearer’s face, and an elastic strap that would loop around the back of your head holding it in place.

“Cut a hole in the bowl to serve as the mouth with a craft knife or grandpa’s wire cutters,” he said, suggesting using parts of a hula hoop to give the head Gritty size, and mesh for Gritty's mouth/your eye hole. “Cutting the smile won’t be easy, so be careful, folks,” he cautioned.

At that point, another square of fake fur could cover the rest of your face, which will be adorned by Gritty eyes and lips, which can be created with craft felt. (“That’s what Muppets are made of.”)

Sound way too complicated? Well, an orange hoodie could take care of the costume head, as well.

She already made one for her daughter. Pattirriccia Ryan, the aforementioned seamstress from Northeast Philadelphia, got a jump on the Gritty costume as soon as her 7-year-old daughter laid eyes on the mascot weeks ago.

In fact, she created one that young Cailin could wear in time for the Flyers home opener which memorably featured Gritty descending from the rafters of the Wells Fargo Center.

Gritty rappels from the @WellsFargoCtr rafters for season opener. pic.twitter.com/7ACqMbUUKL

“I looked for a costume of Gritty, but nobody had anything like that around Philly,” she said.

That’s when she turned to faux fur, which can be bought by the yard and sewn into place after taking proper measurements.

For the sleeves and pant legs, she used plain leggings. Once in place, the sleeves are buttoned in the front.

For the head, she used a stocking cap and – to imitate Gritty’s large head without time to do a paper mache model – used a pool noodle that sits right underneath the helmet.

For the eyes, she cut out fabric and painted them to resemble Gritty’s, albeit Cailin’s don’t swirl around like the mascot’s.

For Gritty's wild hair, she used yarn and combed it delicately out with a cat brush.

“Make sure it’s a higher quality, and look for longer strips for the arms and legs,” she said of the yarn and faux fur. “Cailin’s so excited about the costume. She’s been nonstop bouncing up and down.”

HOW TO BE GRITTY

Now, looking like Gritty and being Gritty are two separate issues.

For the latter, we reached out to David Raymond, aka the local man who was the original human inside the Phillie Phanatic suit. After 16 years of belly-wiggling and streamer-tongue extending, Raymond branched out into the world of mascot training and character branding.

He consulted with the Flyers on the development of Gritty, and was amazed at the reaction the mascot has elicited in his short life. During a phone interview on Wednesday afternoon, he credited the "perfect client." It worked because the organization "did everything correctly."

Sorry @AdventureAqua, fish plushies are a real trigger for me. pic.twitter.com/ChrBO34mrG

Then, he tapped into lessons learned in his Phanatic days to share.

"Be as physically big as you can. You want to move, shake and dance," he said. "A great prop would be an iPod plugged into a little speaker pushing out much from a hockey environment.

"Big movements. Be slapstick. Be careful, but tripping and falling is good, as long as you're falling softly. Be a personal-space invader with belly bumps."

One key component to the costume creation process, said Raymond, is making sure you have the largest scope of vision you can create. Most of the time, he said, that's through the mouth of the Gritty costume, but the eye holes can be near the actual eyes if that's how it works out.

"The only way you'll have fun is if you're comfortable," he said, advising Gritty cosplayers to take breaks and even remove the costume head if you get overheated.