How many compensatory picks should the Eagles expect to receive? 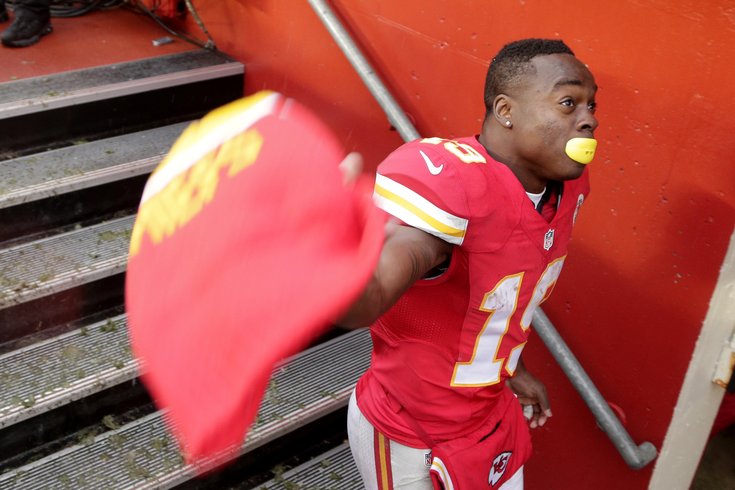 The Eagles won't get jack squat for losing Jeremy Maclin.

None. That's the short answer. Apologies if you clicked on this hoping for a more satisfying answer.

This is a question that I get so often, however, I selfishly decided to that it would be far more time-efficient to just write a post on it to explain the basic mechanics of compensatory picks than to answer it a hundred more times leading up to the draft.

The Michael Jordan of compensatory pick analysis was some guy who went by the handle "AdamJT13," who had a blog where he published information about them. He has not updated it since 2012, but it provides the most comprehensive guide to comp pick rules available.

Using the knowledge gained from "AdamJT13," from 2012 to 2014, my friend Craig Turner and I (95 percent Craig) did compensatory pick projections with impressive accuracy, initially on my old website BloggingTheBeast.com, and then later for Philly.com. We did not go through that exercise in 2015. Anyway, the point here is to ask you kindly to just trust that I'm among the top 0.00001 percent of people in the Universe when it comes to compensatory pick knowledge, which is sad. Ah, who am I kidding? I may put that on my tombstone.

Every year, the NFL awards 32 compensatory picks to teams that lost more players than they gained the previous year in free agency. If you are unfamiliar with the basic rules in which teams are awarded those 32 comp picks, they are:

Here are the four types of players who do not qualify for compensatory picks:

It should be noted that although the NFL admits publicly the basic rules above, NFL teams do not know the exact picks that they will be awarded. They have to make assumptions based upon past history, just as we did when we formerly predicted comp picks.

In 2015, the only qualifying free agent signings who left the Eagles for new teams were Maclin and Allen.

Trent Cole, Todd Herremans, and Cary Williams were released by the Eagles, so they did not qualify for a compensatory pick. The same goes for Bradley Fletcher and James Casey, who were cut by their new teams before midseason, and Casey Matthews, who signed a veteran minimum contract.

Long story short, the Eagles acquired far more players in free agency who qualified for comp picks than they lost, and thus will not be awarded any of the 32 freebies handed out by the league.

I hope this information did not push more important things out of your brains.