Will one of the top three quarterback prospects make it to the Eagles at 13? 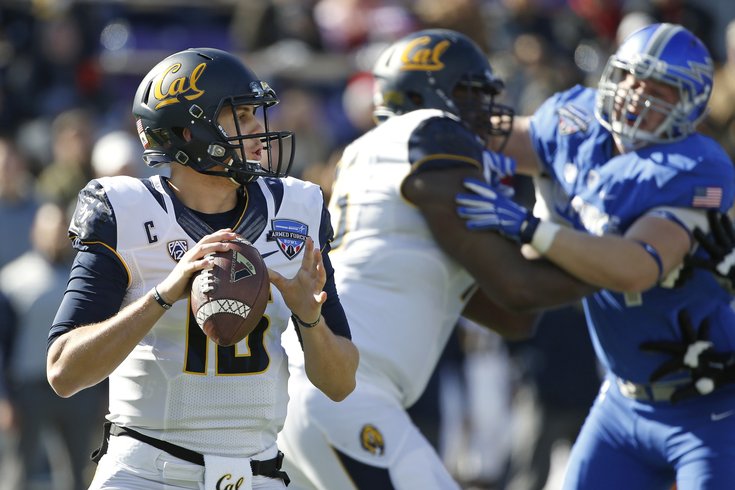 Cal's Jared Goff is one of three quarterback prospects who could be drafted in the top 10 this year.

Will Sam Bradford be back with the Eagles in 2016? In my view, probably not. But before the Eagles move on completely from Sleevie Wonder with the idea that they are going to find their quarterback of the future in the draft, they better be pretty sure someone worth taking will be there.

The three top quarterback prospects early in the process are California's Jared Goff, North Dakota State's Carson Wentz, and Memphis' Paxton Lynch. Over the next three months, those three guys will be dissected every which way possible, but for now, they represent the group likely to be taken somewhere around the top 15 picks of the draft.

Will one of them fall to 13, where the Eagles will be picking? Let's take a look at the teams drafting ahead of the Eagles, and their likelihoods of picking a quarterback.

1) Tennessee Titans: No threat. The Titans drafted Marcus Mariota last season, so they will not be taking a quarterback with the #1 overall pick.

2) Cleveland Browns: The Browns have essentially been looking for a franchise quarterback for the entirety of their existence. Pretty much anyone who dabbles in mock drafts has the Browns taking a quarterback at #2 overall. However, I do wonder if they would dare pass on a quarterback here. While I believe this draft is loaded with "good" quarterback prospects, there are no slam dunk #1 or #2 overall pick types like Jameis Winston or Marcus Mariota.

Will the Browns see a positional player at the top of the draft that they have rated too far above their top quarterback? If so, they may go the route of a veteran quarterback, like Colin Kaepernick, RG3, or Sam Bradford, and then draft the positional player. The Browns are in a very interesting spot. Still, they're a good bet to go QB.

We'll learn more about the Browns' intentions once we see how they attack free agency.

3) San Diego Chargers: Philip Rivers is 34, but he is an iron man. He has started 169 straight games for the Chargers, which is the fourth longest streak at the quarterback position in NFL history. Rivers is still a top shelf quarterback and has proven he can stay healthy. I don't suspect he's going anywhere anytime soon.

4) Dallas Cowboys: If the Cowboys were smart, they would recognize that Tony Romo's bones are made of papier-mâché and dandelions, and they'd get a quarterback to replace him whenever Romo can no longer play. Romo is having surgery this offseason to repair a clavicle he has already broken three times. Romo also has a history of back issues.

However, never underestimate the Cowboys' delusion. Dallas may very well think they're a good team that only went 4-12 last season because they missed Romo, when in reality they just aren't a very good team. In a terrible NFC East, temptation will be high to pick a positional player who can help the team immediately in favor of a quarterback who will go completely unused if Romo stays healthy.

5) Jacksonville Jaguars: The Jaguars drafted Blake Bortles third overall in 2014, and he improved significantly his second season as the team's quarterback.

6) Baltimore Ravens: Jim Harbaugh thinks Joe Flacco is the best quarterback in the NFL. Or at least that is what he has said, anyway. Flacco is still only 31 and has plenty of time left in the NFL.

7) San Francisco 49ers: During his introductory press conference, Chip Kelly was asked about a report that the Eagles tried to trade for Colin Kaepernick last season. His response:

"I don't know where that report came from, but we were very happy with Sam in Philly. In terms of Kap, I just know playing against him, he was very difficult for us to play against two years ago out here on this field. We didn't play San Francisco last year, so I haven't done a ton of tape study in terms of how he's played. We're in that process right now. The main thing for me right now is putting a staff together and then we will evaluate everybody on the roster."

Kelly values "repetitive accuracy" from his quarterbacks. That is not Colin Kaepernick. Could Kelly go after Bradford again? Or will he see a quarterback in this draft that he thinks can be his repetitively accurate quarterback. The player who probably fits that profile best is Cal's Jared Goff.

8) Miami Dolphins: Ryan Tannehill was drafted eighth overall in 2012, and he signed a four-year contract extension worth $77 million in May of 2015. While Tannehill has just been "OK" as the Dolphins' QB, he's not going anywhere.

10) New York Giants: Eli Manning just signed a four-year contract extension worth $84 million in September, and the offensive coordinator with whom he's had good success the last two seasons was just hired to be the head coach. Meanwhile, like Philip Rivers above, Eli is an iron man, as he has started 194 consecutive games, which is third-best in the history of the NFL at the quarterback position.

11) Chicago Bears: Before the 2015 season began, the Bears felt like a no-brainer team that would be in the hunt for a new quarterback this offseason. However, Jay Cutler lost almost all of his offensive weapons at some point during the 2015 season and still managed to be productive under offensive coordinator Adam Gase.

Will the Bears be sold by the best season of Cutler's career, or will they get a quarterback in place as insurance? The Bears can get out of Cutler's bad contract after the 2016 season, and he's essentially year-to-year thereafter. The Bears would be smart to begin grooming a new quarterback now in preparation of Cutler potentially regressing to what he has been throughout the course of his career. If they draft a quarterback and Cutler turns out to be productive again in 2016, then the Bears have a "good problem" on their hands.

12) New Orleans Saints: Drew Brees just turned 37 and the end of his career is drawing near. Brees is also in the final year of his contract. That makes the Saints a prime candidate to draft a quarterback. However, the wildcard is Garrett Grayson, who the Saints were proud of themselves for taking in the third round of the 2015 draft. Sean Payton has had a year to see what Grayson is. If the Saints think Grayson can take over the reins from Brees in 2017, they could opt to help fix their atrocious defensive in the first round.

There's always a chance a team like the Rams (15), Bills (19), Jets (20), or Texans (22) could try to trade up ahead of the Eagles to grab a quarterback, but based solely on the teams drafting ahead of the Eagles at 13, there's a good chance that one of the three will make it through.