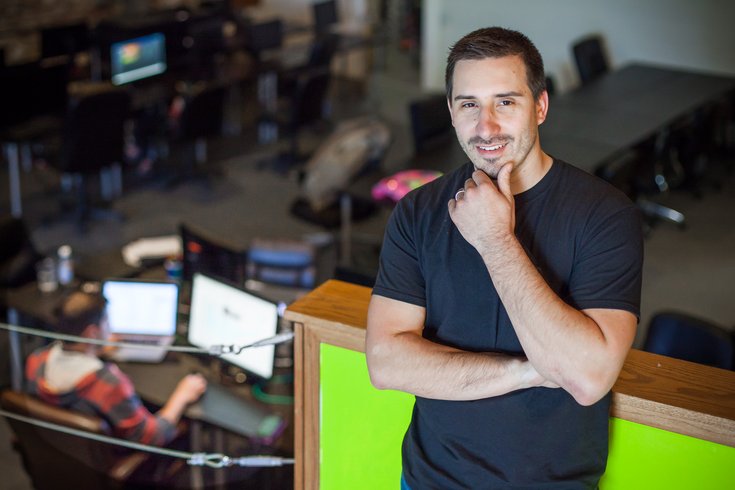 Alex Gilbert, CEO of Red Queen Gaming, in their new headquarters on 'N3rd Street,' a segment of North Third Street in Northern Liberties where many tech companies have recently relocated to.

Think you're good at "Call of Duty"? Think again: You could be much better, if only you'd look at the data.

Or, at least, so goes the argument of Red Queen Gaming CEO Alex Gilbert.

"Imagine you start a round of 'Call of Duty,' you've got a tablet and you have it synchronized to your PS4 or Xbox. While your map loads, you get a heat map that pops up on your tablet and shows where you tend to perform well on that level — and where you tend to get decimated," Gilbert explained to PhillyVoice. "It can help you understand, ‘When I run through this corridor, I’m getting blasted. And either I’m going to avoid it, or take precautionary steps.'"

Gilbert is a former Lockheed Martin engineer and lifelong gamer ("Since I could pick up a remote," he quipped) from Clementon, Camden County. He co-founded Philly startup Red Queen Gaming earlier this year to better gaming experiences — and thus, better gameplay skills — by creating a landscape in which more video game "tools" can be made and distributed. Those tools are like digital accessories for game-playing — often used to enhance a gaming experience using data attained from game developers like Activision-Blizzard, Electronic Arts or any of the innumerable indie game developers who now flood the market with mobile games and console titles released through platforms regulated by Sony and Microsoft.

Red Queen plays the role of facilitator between game developer and toolmaker. They work with developers to legally obtain gameplay data (whereas many toolmakers currently scrape data illegally) and collaborate with toolmakers to not only turn that data into viable tools but distribute their final designs through what they'll call the "Red Queen Marketplace." There, toolmakers can charge a fee for their product, with Red Queen taking a cut. Though, hobbyists are welcome to offer their gameplay tools through the marketplace for free.

Their service solves a few problems, Gilbert said. But, prime among them, it gives players a go-to destination for finding tools worry-free.

"Right now, the tool landscape is very fragmented in that there’s no conventional way to find the tools for any particular game," Gilbert said. "Let’s say you play an obscure game, even 'Clash Royale' — it’s not an obscure game, but if you went to search for 'Clash Royale' tools right now, you’d find ‘Clash Royale hacks, cheats, how to get gems for free,’ and by the way, I guarantee you’re going to give away your credit card to somebody you don't want having it.

"So, there’s no conventional way of referring to tools, of discovering tools or for a toolmaker to distribute those tools."

Another problem they hope to alleviate, if not fix, is the estimated $7 billion shadow economy that exists around cheats and real-world payment for in-game currency. That market, he speculated, wouldn't exist if players had free rein to make frustrating elements of gameplay more fun. 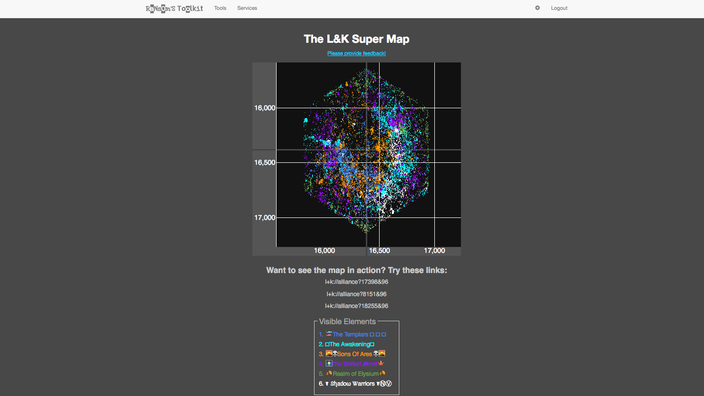 A heatmap created using a Red Queen Gaming toolkit. It's intended for use with the massively multiplayer online strategy game 'Lords & Knights.'

For a success story, Gilbert pointed to a tool made by his co-founder, CTO Daniel DuLeone, which used a heatmap in the massive multiplayer online game "Lords & Knights" to filter a game map to only show clans, alliances, etc. that were relevant to a particular player. Because that game has a user base of more than 100,000 players, it's one example of an industry-wide economic opportunity that's largely gone untapped.

Developers, he added, are unlikely to be threatened by player-created tools because it means less in-house development dollars to develop the tools themselves or simply address a common frustration. An example Gilbert offered: If a "World of WarCraft" player is irked by constantly thumbing through their full inventory for a specific item, but a toolmaker has a tracking tool that can help, it eliminates Activision-Blizzard's need to allocate resources to solving that problem.

Currently, Gilbert is fresh out of the Philly Startup Leaders Accelerator and working with a team of about 10 to launch an online database of existing tools, as well as collaborate with Philadelphia-area video game developers — an effort to start small and earn the trust of larger developers down the line.

Based out of the Devnuts coworking space on North Third Street, Red Queen Gaming is fundraising $500,000 to bring their tech team on board full-time and develop their platform.