Howie Roseman hints that Ezekiel Elliott is an option for the Eagles at pick No. 8 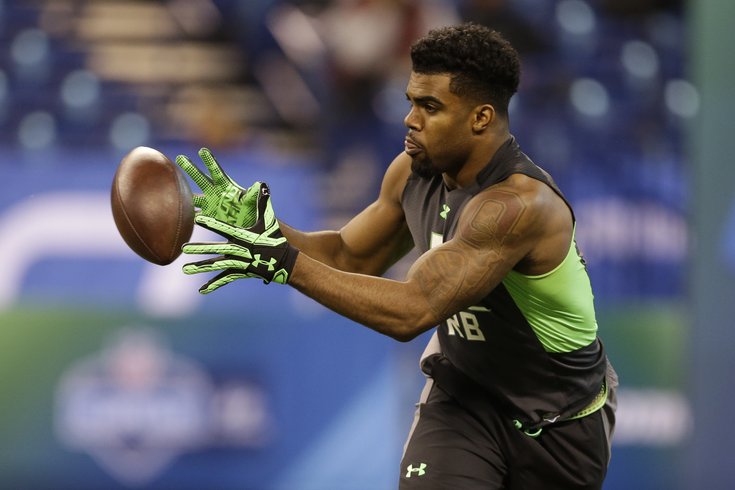 Ezekiel Elliott is wearing green gloves above. What does it mean?!?

BOCA RATON, Fla. – Ever since the Eagles traded up from 13th overall to eighth overall in the 2016 NFL Draft, many Eagles fans have debated whether or not Ohio State running back Ezekiel Elliott is a player the Eagles might consider with a top 10 pick.

Those in favor of drafting Elliott have noted that he is a special talent who does everything well. He's fast, he can break tackles, he pass protects, he's a good receiver out of the backfield, and he had tremendous production the last two seasons at Ohio State.

Those opposed to Elliott in the first round generally agree that he is a special talent, but are against drafting him because of the position he plays. They point out that running backs have short shelf lives, there have been a good number of running back busts over the last 20 years, and the 2017 running back class looks like it may be stacked.

The most common sentiment, however, is that running backs are easy to find either late in the draft or through other means.

"We studied this," said Roseman. "There’s this narrative that you can get running backs in the fifth, sixth, seventh round of the draft and free agency. But when you look back at the last 10 years, guys who were really in the top 10 in rushing, those guys are high picks."

He's not wrong. In fact, we went back and looked at the running backs who finished in the top 10 in rushing each of the last 10 years. There were 50 of them. Here's where they were drafted, in order of their overall draft position:

Of course, finishing in the top 10 once or twice doesn't necessarily make that a good pick. Certainly, for example, the Raiders, Bears and Saints would love to take mulligans on drafting Darren McFadden, Cedric Benson and Ricky Williams, respectively, in the top five picks.

There is, however, little doubt that Roseman is correct in stating that it's difficult to find impact running backs late in the draft, based on the above chart. Of the 50 rushers above, only nine were Day Three picks, while four were undrafted.

"I think there’s a difference between a special player and a role player at the position," said Roseman. "When you talk about the guys who are 1500-yard rushers, the guys who people are game-planning for, those are hard to get later in the draft."

To be clear, Elliott's name was never specifically mentioned by either Roseman or the reporters in attendance, but clearly, he is the only running back worthy of top 10 consideration. Ultimately, it may depend on the type of offense the Eagles wish to run.

"When you find a special talent at that position, that guy who can run the ball, pass protect, can catch the ball out of the backfield, that’s a unique weapon," said Roseman. "I don’t think the position is devalued. Talking to (head coach) Doug (Pederson), obviously we come from the same school of Andy, and what he could do with those kinds of guys."

In 2015, Pederson's and Reid's Chiefs had the sixth highest run:pass ratio in the NFL, with just under 46% of their plays being called runs.