'Unusual' whale deaths have been occurring at shore since 2016 – years before work began on N.J.'s wind farms

On Thursday, another humpback washed ashore, this time in Brigantine. NOAA has been studying whale mortalities for seven years and attributes many to vessel collisions 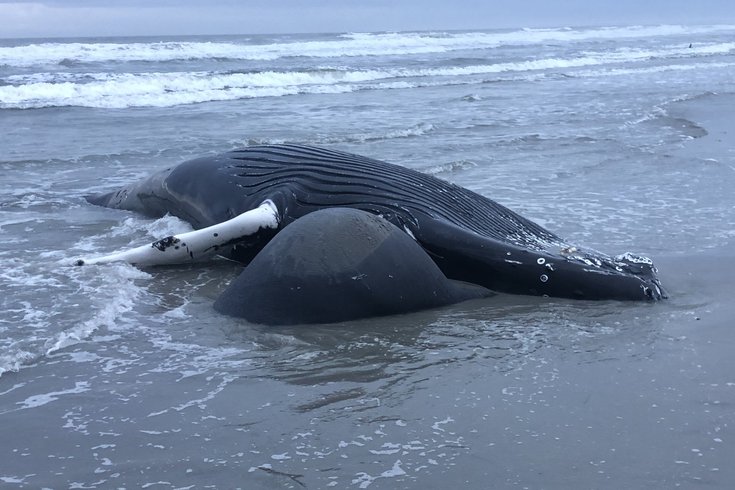 A dead humpback whale was found in Brigantine on Jan. 12, the fifth to wash ashore in New Jersey since last month. This prompted activists and politicians to blame New Jersey's offshore wind project, but NOAA has been investigating unusual whale deaths since 2016, years before any work on the wind farms began.

Another humpback whale washed ashore in New Jersey on Thursday evening, the fifth spotted along the state's coast since December. While this rash of whale deaths has ignited protests from groups saying recent wind farm development is to blame, despite that scientists have been studying bizarre humpback mortalities for seven years now — and they pin most of the blame on boating activity.

"So in 2016, we did declare that humpback whales were part of an unusual mortality event, and that basically means that their current stranding rate is significantly above the historic rate for that species," Ainsley Smith, marine mammal stranding coordinator for the Greater Atlantic Regional Fisheries Office of NOAA, said Friday. "That can be attributed to or classified based on several defining factors including a disease event or entanglement or vessel strike.

"We (are) seeing evidence of ship strike and entanglement in a large number of these cases."

The latest dead humpback whale washed up Thursday on Brigantine's North End beach, the Marine Mammal Stranding Center wrote in a Facebook post, describing it as a juvenile that was between 20-25 feet long. A necropsy will be performed on the animal in hopes of determining the cause of death.

An unusual mortality event – or UME – as defined by the Marine Mammal Protection Act, triggers a wider investigation by the National Oceanic and Atmospheric Administration. Since January 2016, an independent team of scientists has been reviewing data and samples from the whales to draw conclusions and recommend next steps. Their investigation is not limited to New Jersey, but spans the entire East Coast.

As NOAA data reveals, scientists typically saw about 10 humpback strandings annually along the eastern U.S. prior to the UME, apart from a spike in 2013. But in 2016, they recorded 26 and the following year, they surpassed 30.

New Jersey has contributed 2 to 5 of those whale strandings yearly since the investigation began, surpassing states like Maryland and Maine, but lagging behind New York and Massachusetts, where there have been as many as 9 or 10 strandings.

NOAA and local agencies have conducted partial or full necropsies on about half of the whales; some were too severely decomposed to study, or floated out of reach. But the researchers have not been able to attribute any mortalities to the construction or operation of offshore wind farms, Smith said.

Smith said NOAA also does not have a "key event" explaining the rise of deadly ship strikes or entanglements, but the team is continuing to search for clues.

The dead whales became a political issue on Thursday, with U.S. Rep Jeff Van Drew and New Jersey State Sen. Vince Polistina, both Republicans, calling for the suspension of the wind farm project.

Van Drew, whose congressional district includes much of the Jersey Shore and who opposes offshore wind projects, called for a federal investigation on Friday.

"Ocean life is being put at risk as our Governor (Phil Murphy) and President (Joe Biden) force through their Green New Deal policies, without giving full consideration to their real-world impacts," he said in the Press of Atlantic City. "We have seen a complete lack of transparency from New Jersey's leaders, as well as D.C. politicians who are ramming through these projects in order to push their climate agenda."

Polistina, who represents Atlantic County, said he can't believe that the wind farm work and the deaths of the whales can't be dismissed as a coincidence.

"We should suspend all work related to offshore wind development until we can determine the cause of death of these whales, some of which are endangered," he said.

Ocean Wind 1, the wind farm project from PSE&G and the Danish energy company Ørsted, is still in the research stage, putting it about four years away from actual installation. An impact statement from the Bureau of Ocean Energy Management released this summer said the project would have minimal impact on ocean life, including marine mammals, but could adversely affect commercial fisheries.

Gov. Murphy responded that the preliminary work for the offshore wind project will continue, calling the recent deaths of the whales is "tragic" but also pointing to NOAA's findings about the unexplained spike in whale strandings since 2016.

A July 2022 study from Rutgers University and 23 other organizations found that humpback whales spotted off the coasts of New Jersey and New York usually stay for an "extended period of time" and return year after year. These conclusions were important, lead researcher Danielle Brown said, because the extra time these whales spend in the area "may mean increased exposure to human activities including busy shipping traffic leading into the Port of New York and New Jersey."

Marine scientists may not have the full picture what is causing these whale deaths for months or even years. The turnaround for a single whale necropsy can take many weeks, as samples are shipped to labs across the country with small staffs before NOAA and local networks can even review and compile a report.

"I know (these cases) do get a lot of attention, and a lot of people feel very passionately about seeing a deceased whale, they're majestic creatures," Smith said. "So I just want to reinforce that NOAA and our stranding network partners also feel very strongly and passionately about them, and we're doing everything we can to investigate and learn more."

NOAA encourages recreational boaters to keep an eye out for feeding whales and maintain a safe distance of 100 feet. If you spot a stranded whale along the coast, call (866) 755-6622 to report it.