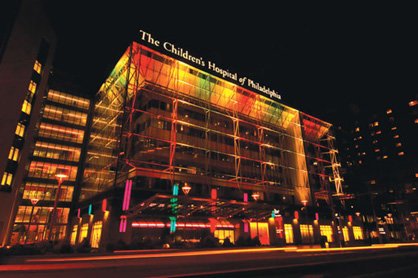 The Children's Hospital of Philadelphia.

The combined Hospital of the University of Pennsylvania-Penn Presbyterian Medical Center has been ranked as the best hospital in Pennsylvania and among the top 10 in the nation, according to the new U.S. News & World Report's annual Best Hospital rankings.

HUP and Penn Presbyterian operate jointly as part of the Penn Medicine health system. The hospital's high ranking was boosted by it receiving "high honors" in 11 different clinical specialties.

Among the nearly 5,000 hospitals included in the rankings, HUP and Penn Presbyterian is one of only 20 institutions – and the only one in the Philadelphia region – to be named to the publication’s 2016-2017 Honor Roll.

The Best Hospitals rankings, now in its 27th year, scores hospitals based on data like survival rates, patient safety and nurse staffing, among other factors. A more detailed explanation of how the rankings were compiled can be found here.

Behind the Penn Medicine hospital, UPMC Presbyterian Shadyside in Pittsburgh and Thomas Jefferson University Hospital in Center City rounded out the top three hospitals in Pennsylvania.

“To be ranked among the top pediatric hospitals is an honor, which reflects our commitment to provide the optimum care for every child and family we serve,” said Madeline Bell, President and Chief Executive Officer of The Children’s Hospital of Philadelphia in a press release. “The level of clinical excellence among the hospitals evaluated makes our inclusion gratifying, and I am proud of our dedicated and talented physicians, nurses and clinical support staff for their efforts on behalf of our patients.”

In New Jersey, Hackensack University Medical Center ranked No. 1 atop a list dominated by hospitals located in North and Central Jersey. AtlaniCare Regional Medical Center in Atlantic City placed fifth in the state and Virtua Vorhees in Camden County tied for eighth. Both South Jersey hospitals earned the designation of "High Performing."