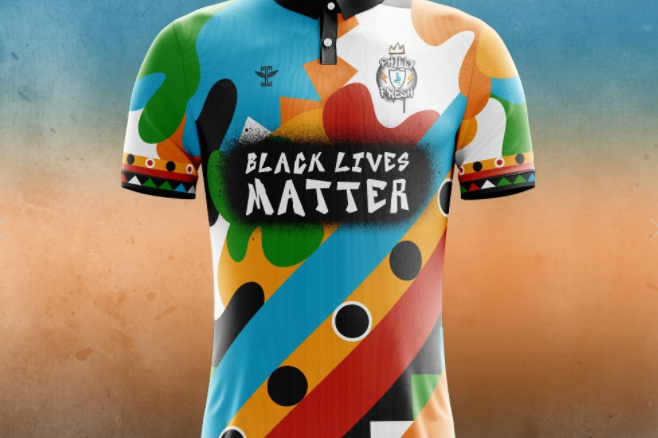 Icarus FC, a Philadelphia-based clothier that designs and produces custom-made soccer apparel, has released a new kit that can simply be described as fresh.

The local company is rolling out a "Fresh Prince of Bel-Air" and Philadelphia Union crossover jersey that also pays homage to the Black Lives Matter movement.

Originally designed by a soccer graphic design brand called Screamer FC, the new kit is described as having "the flair and style of the Fresh Prince with the passionate support of the Philadelphia Union fan base."

An array of different colors and designs are imprinted across the front and back of the uniform.

"Black Lives Matter" is spray-painted in white with a black background across the front of the jersey. Located in the top right corner of the uniform is a logo that says "Philly Fresh" with a crown above it. Icarus' logo can be spotted in the top left corner of the kit. The jersey number is spray-painted in black with a white background on the back.

"Stay Fresh or Die" and a severed snake wearing a crown are imprinted across the back collar of the uniform. This feature is a reimagined design of the "Join or Die" snake cartoon published by Benjamin Franklin in the Pennsylvania Gazette in 1754.

The kit was originally designed by Screamer FC in February as part of Black History Month.

The jersey is available for pre-order at $64.99 until May 2. Customers should allow 5-7 weeks for production and shipping. The uniform is available in all sizes.

Icarus FC has pledged to donate 15% of the proceeds raised through jersey sales to Black Lives Matter Philly and an additional 15% to the Kensington Soccer Club.

The company was founded in 2017 by Philly resident Robby Smukler in an effort to make the soccer kit design process more widely available and inclusive to others.

"We want to give the design process that’s really only reserved for larger clubs to everyone," Smukler said in an interview with Urban Pitch back in February. "We want to be a one-stop shop for clubs while also giving them that custom kit ability."

Given its Philly roots, Icarus FC has also designed and produced a number of Philly-themed soccer apparel.

Among the collection's highlights includes a shirt called "Bella Vista FC" in honor of the Philly neighborhood and its water ice offerings. With a design similar to that of the kit worn by the English soccer club Aston Villa, "Wüdder" is written across the front of the jersey and a Bella Vista FC logo with a cup of water ice can be found in the top right corner.

Ahead of the 2021 season, the Union unveiled its fan-designed "BY|U" kit in February, reflecting the history of Benjamin Franklin and the Philly region.