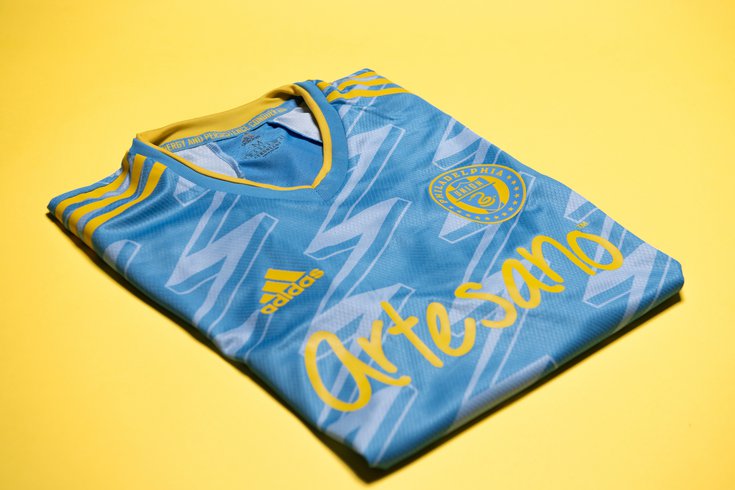 The Union's new secondary kit consists of a tonal lightning pattern, as well as a blue base and bolt yellow accents.

When the 2021 MLS season gets underway in April, the Union will be rocking a brand-new, fan-designed kit that pays homage to Benjamin Franklin and the Philly region.

The Blue and Yellow Union kit, or more simply referred to as the "BY|U" kit, features "bold" color templates and styles that have never been used before in the team's history, the club announced Wednesday.

The uniform consists of a tonal lightning pattern, as well as a blue base and bolt yellow accents. The lightning is a symbol of the Union's "unique and energetic" style of play; unpredictable, but striking "with a speed and sudden power that electrifies everything in its path."

The Union's logo can be found on the left chest of the jersey in colors derived from the flags of Philadelphia, New Jersey and Delaware. The logo design is also a tribute to the Sons of Ben, the Union's official supporters group.

"Energy and persistence conquer all," a quote attributed to Franklin, is written across the neck. The quote is meant to represent two unbeatable qualities of the team and the city.

The new secondary kit was designed by a group of fans called the Union Creators' Collective. The group was formed in 2019 to participate in the jersey design process, which included giving feedback to concepts and reviewing art samples. The group was made up of season ticket holders, Sons of Ben members, Union employees, players and media members.

The new jersey is a first for "club and fan culture in both design and creative conception," the team said.

“The new kit is truly by the fans, by ‘the U.' Fans wanted colors influenced by the flags of the Delaware Valley, a design inspired by innovation born in our city, and they wanted to shock the soccer world,” Philadelphia Union Chief Marketing Officer Doug Vosik said.

“This kit is Philadelphia. The gritty, beautiful, diverse, creative place that we all love," he continued. "As a Philly native and an original season ticket holder years before working at the Union, I have not had a prouder moment in bringing our community together to shape the future of our club.”

The Union's new jersey has earned the approval of the Phillies.

Online orders for the secondary kit will begin on Friday at 10 a.m. Those who had already committed to attending the Union's Kit Launch Experience have been allowed to pre-order the jersey within a 48-hour window that opened on Wednesday.

The new secondary kit can be bought at the aforementioned event, which is scheduled to take place on several dates in February at Subaru Park in Chester. For every jersey purchased at the event in Delaware County, Bimbo will donate five loaves of Artesano bread to Chester's food insecure population.

The Union won their first Supporters' Shield in club history last season for having the best record in the league. However, the club was upset at home in the first round of the MLS Cup Playoffs by the New England Revolution.