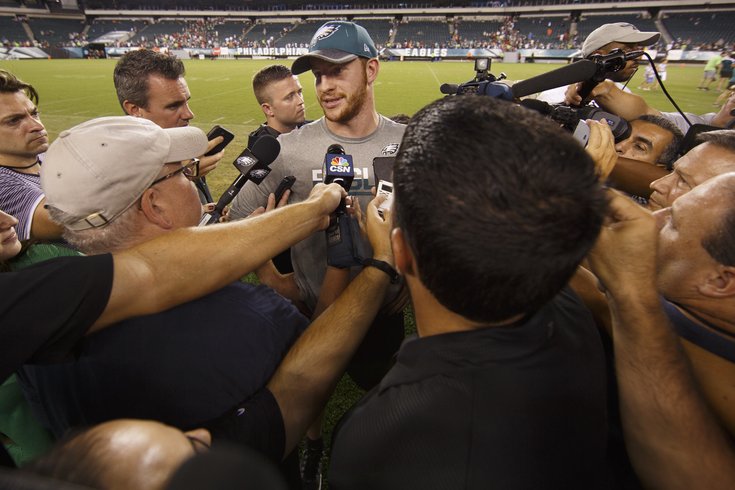 On the 18th and final day of Philadelphia Eagles training camp, Doug Pederson gave the players an easy day, as the Birds will head west to play their second preseason game in Pittsburgh in two days. There wasn't much action to report on, and I even had to leave for a bit to write about the Eagles' trade for Dorial Green-Beckham.

I could have easily just not written up notes today, but my OCD would never allow me to have observation posts for 17 straight practices and none on the 18th and final day.

And so, because the Saints' and Patriots' beat writers played each other recently, we'll take a look at the Eagles' media, and what positions we'd play if we had to field a 22-man team. (Note: We omitted former players like Ike Reese, Mike Quick, and Brian Baldinger, although I haven't seen Baldy around in a while anyway).

QB: Jimmy Kempski, PhillyVoice: Yes, this is self-serving. My apologies in advance. I have no idea if any beat writers can throw an actual NFL ball, and I know I'm at least mildly competent there. But more importantly, former Eagles QB Matt Barkley once challenged me to some kind of odd QB duel, which I accepted. Barkley then chickened out, so I feel like I won by forfeit. If anyone else can claim they beat an NFL quarterback (using that phrase lightly) in a QB competition, I'm all ears.

RB: Zach Berman, Philadelphia Inquirer: Berman is a little bulldog and fan favorite. I like the idea of running him off tackle behind our enormous offensive tackles.

WR: Jeff McLane, Philadelphia Inquirer: Jeff injured himself during the media field goal kicker competition two years ago, so I wonder about his durability, but if healthy, he can work the middle of the field.

TE: Les Bowen, Philadelphia Daily News: We're not going to ask Les to do much route running, but look at his intensity blocking Howard Eskin like 40 years ago.

LT: Brandon Gowton, Bleeding Green Nation: Brandon is 6'9, and he has a basketball background, so I like his combination of athleticism and arm length.

C: Ed Kracz, Bucks County Courier Times: If you've ever seen Ed in person, you'll know instantly how perfect a fit he is at center.

RG: Nick Fierro, Allentown Morning Call: Nick has been in the media room arguing on the phone for the last week with whoever sold him his lemon of a computer, and I can say with certainty that his mean streak will be a great fit at RG.

RT: Josh Paunil, PhillyMag: Josh is 6'5, so again, like Gowton above, I love Josh's wingspan here. There's no team of beat writers in the NFL that can match the size of our offensive tackles.

DE: Geoff Mosher, 97.5 the Fanatic: Mosher used to be obsessed with writing about the defensive linemen, so I feel like he's probably picked up a thing or two along the way.

DE: Matt Lombardo, NJ.com, 97.5 the Fanatic: Matt has decent size, so we'll ask him to two-gap and let wildman Grotz make plays behind him.

OLB: Rob Maaddi, Associated Press: Have you ever seen Rob Maaddi? He's freaking jacked. I don't even care if he can play. He's one of my OLBs for intimidation purposes alone.

ILB: Paul Domowitch, Philadelphia Daily News: Domo's been doing this for a long time, so he's our Mufasa.

ILB: Derrick Gunn, CSN Philly: Like Domo, Gunner been around a while. I like his build and smarts for the position.

OLB: Bob Grotz, Delaware County Times: I'm pretty sure Grotz is crazy, based on this tweet:

Honestly, that's more coherent than anything Kiko Alonso ever said. I'm just going to put Grotz out there and assume he hurts someone.

CB: Tim McManus, ESPN: My favorite thing about TMac is that he will hammer his interviewee subject until he gets them to say something worthwhile. His first pass will get the vanilla answer, the second one will get a slightly more informative answer, and then the third one will get Cary Williams talking about sconces. I like that quality in a corner. He'll keep coming back at you if he gets beaten once or twice.

S: Eliot Shorr-Parks, NJ.com: I was going to put ESP at corner, but his poor 40 time at the open practice at the Linc a week ago scared me off.

S: Dave Zangaro, CSN Philly: Jim Schwartz doesn't care about height at safety, and neither do I. Love you, Dave. ;)

CB: Matt Mullin, PhillyVoice: Matt can't kick a field goal to save his life, as I saw in the field goal kicking competition last year, but he claims he has wheels, and he's like 6'3, so I like his length there.

I know it'll be tempting, but please don't slide into my DMs, ladies.

P: Martin Frank, Wilmington News Journal: Martin came in second in the media kicking competition a year ago, so I guess he'll be our punter. Not that we'd ever punt.

LS: Mark Eckel, NJ.com: If you've ever heard Eckel tell a story, he reminds me a little of Joe Pesci in Goodfellas. We need an affable LS in the mold of Jon Dorenbos.