Eagles second preseason game: Who's playing, who isn't, and when will Carson Wentz return? 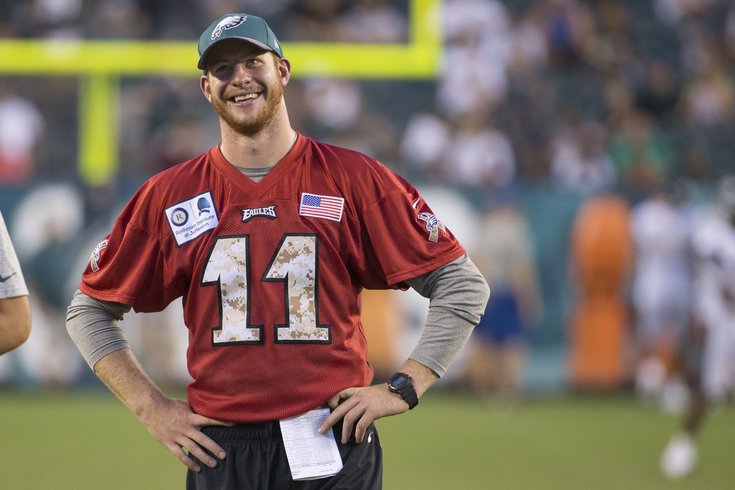 Please give us a reason to watch the preseason games again, Carson.

In the Philadelphia Eagles' first preseason game against the Tampa Bay Buccaneers, Sam Bradford threw one checkdown and was done for the night. In the Eagles' second preseason game against the Pittsburgh Steelers, Bradford will have the chance to throw multiple checkdowns, as he will play the entire first quarter and beyond, according to Doug Pederson.

"The (first team offense) I plan on getting the entire first quarter," said Pederson. "Hopefully, I can get a series or two into the second (quarter). I want to extend their time, obviously, more than three plays and get them some extensive work in the first quarter and a half."

Wentz will travel with the team for the purpose of getting extra mental reps, while the rest will remain in Philadelphia.

Newly acquired wide receiver Dorial Green-Beckham will also not play, although he is expected to arrive in Philadelphia tonight.

In terms of when Wentz will return to practice, Pederson said, "It's day-to-day. It just depends on how well he can function with the discomfort that he has. I've had this injury before too, and it's a day-to-day injury. Right now, if it were game week I think he'd be ready but at the same time, we're fortunate that it's not and it's the preseason. We hope to get him back before the end of camp for that last game."

As for the offensive line, Pederson said the starting lineup will be as follows:

As we noted in our practice notes a day ago, with Allen Barbre sliding out to RT, the two obvious candidates to fill in at LG are Stefen Wisniewski and Isaac Seumalo. There is no justifiable way anyone can say that Seumalo has had a better camp than Wisniewski. However, if the Eagles were to go with Seumalo, it just make some sense in the long-term. Wisniewski admitted bluntly that he was playing this season for his next contract, and is probably little more than a one-year band-aid, while the team hopes that Seumalo can eventually be a long-term starter. It seems rather clear the Eagles are giving Seumalo every opportunity to win that starting job.