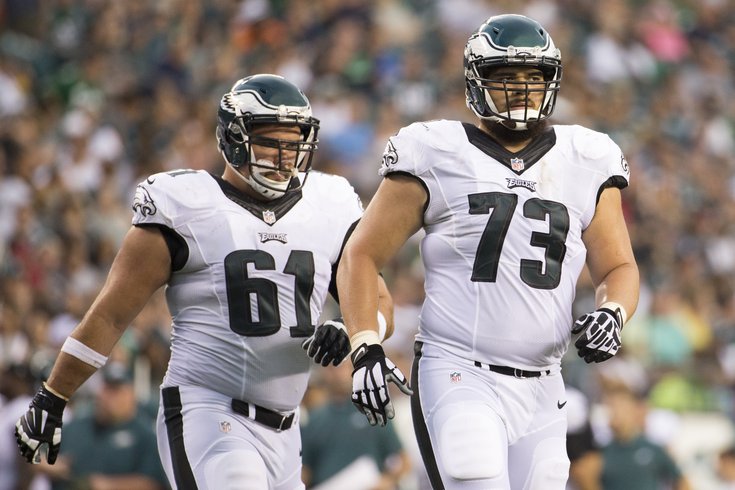 With Allen Barbre likely moving to RT, will the starter at LG be Isaac Seumalo or Stefen Wisniewski?

On the second-to-last day of training camp, the Philadelphia Eagles had a "10/10/10" practice in shorts, so action was sparse. There aren't many things to note, so we'll make this another general observation post, focusing on the offensive line.

But first, before we get to the general notes, we'll update the kicking competition: For the second straight day, with the Allen Barbre seemingly the choice to replace the likely-to-be-suspended Lane Johnson at RT, the Eagles' offensive line looked like this:

With Barbre sliding out to RT, the two obvious candidates to fill in at LG are Stefen Wisniewski and Isaac Seumalo. There is no justifiable way anyone can say that Seumalo has had a better camp than Wisniewski. However, if the Eagles were to go with Seumalo, it just make some sense in the long-term. Wisniewski admitted bluntly that he was playing this season for his next contract, and is probably little more than a one-year band-aid, while the team hopes that Seumalo can eventually be a long-term starter.

For a team that isn't realisitically going to compete for a Super Bowl this season, if there isn't a wide gap between Wisniewski and Seumalo, maybe you just let the rookie take his lumps for one season?

In the first preseason game, a few people pointed out a play to me in which rookie OT Halapoulivaati Vaitai looked like he didn't get out of his stance until the edge rusher opposite him was well into the backfield.

That's actually something a number of college coaches teach. If an offensive lineman feels that a defender has jumped before the signal has been called by the quarterback, they will stay in their stance through the play. In the case of the play above, the center snapped the ball too early, before Carson Wentz called the signal for the snap. Hence, Vaitai remained in his stance.

ESPN's Keyshawn Johnson was fooled by that once before:

That has happened in several Florida State games, for example. Here's an announcing team that understood what the Seminoles were doing:

In other words, Vaitai wasn't just staying in his stance because he's an idiot or something.

Who would fill in for each offensive lineman if someone else went down?

If the Eagles lost any more offensive linemen, here is who I believe would fill in for them:

• LT: Jason Peters: Matt Tobin has gotten a ton of reps at LT with the first team offense, whenever the Eagles have given Peters a rest, which again, has been a lot.

• LG: Isaac Seumalo: To begin, it's certainly not set in stone that Seumalo is even the guy right now at LG. It could very well be Wisniewski. But clearly, if Seumalo is the starter, Wisniewski would be the first fill-in here, and vice versa.

• C: Jason Kelce: Wisniewski would clearly be the first guy in if Kelce went down.

• RG: Brandon Brooks: When Brooks was out earlier in camp, Wisniewski filled in at RG.

• RT: Allen Barbre: There's a thinking that Tobin is better on the left side than the right, so I'm not so sure he'd be the first guy up in this scenario. My best guess is that Dennis Kelly would be the guy.