If Hinkie expects fans to buy in, he owes us at least an occasional update 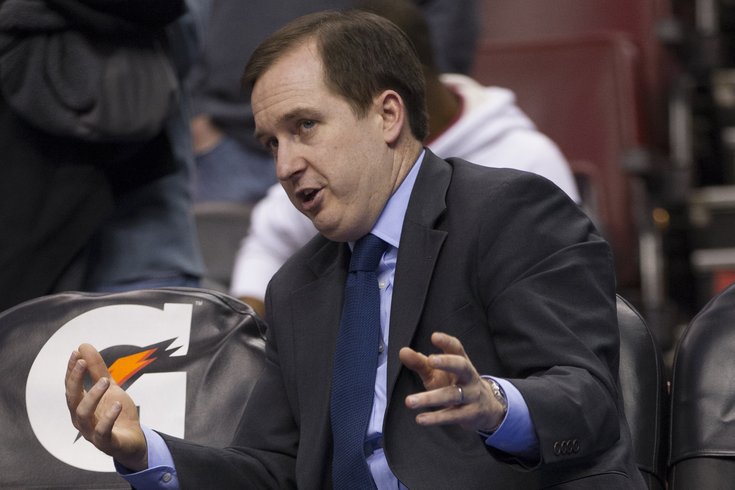 Sixers general manager Sam Hinkie can't keep relying on his subordinates to be the collective face of the franchise.

Unless you are a hobbit, there is nothing good about Middle Earth, and that is why a good number of fans continue to quietly support the Philadelphia 76ers and their unorthodox plan to get the franchise out of the spin cycle of getting stuck in the middle of the NBA’s great wasteland of going nowhere.

The support of the fans is necessarily quiet, because there really aren’t any big crowds to watch this process, and there is really nothing worthy of a loud celebration. On the eve of the all-star break, the Sixers remain content to slowly plot and plod their way through the early years of this dangerous plan. Indeed, they have the reigning NBA Rookie of the Year in Michael Carter Williams, but there are still a whole lot more questions than answers.

Even on Monday night, when Sixers general manager Sam Hinkie emerged from his cave of silence to answer some seemingly rehearsed questions during a TV interview, there wasn’t much new in terms of information. Little has changed from the original suggestion that the team is in full rebuild mode, and the fortunes won’t change rapidly.

Perhaps the brightest note is that one of the biggest fears of this plan has not taken root. That fear was that a culture of losing would filter through the organization, leading to an acceptance of their doormat status and lack of effort.

In Hinkie’s world, it is more advantageous to make three left turns, when many critics believe one right turn would do the job.

Instead, coach Brett Brown has managed to coax a pretty good effort out of his overmatched team on most nights. In fact, when compared to the relative level of effort by most NBA teams from night to night, it doesn’t appear that the Sixers are lacking at all in that department.

The worst part of this entire development portion of this long-term plan is that Hinkie is not a general manager who is willing, or even able to discuss and explain the process. Instead, Brown is thrust in front of the public as the spokesman for where the team stands in terms of talent, and vice president Scott O’Neill is handed the job of defending the club’s awkward GPS readings.

In Hinkie’s world, it is more advantageous to make three left turns, when many critics believe one right turn would do the job. Why not get a shooter in the draft, instead of planning ahead two steps with more draft picks for the future?  Why move on from players who add some degree of immediate success, rather than game on unknown players in the future?

These are questions that would be much better answered by Hinkie than by his employees. This is a far different situation than the Eagles, Phillies and Sixers as Hinkie has basically asked the city and its fans to believe in something very different.

We are led to believe that Hinkie’s staff is working harder than any other staff in basketball in scouring the world for talent, when in fact it is easier than ever to keep track of worldwide talent by simply formatting a Google search. Maybe all the juggling of decimal points, swapping of draft picks and video replays will pay off with an era of long-term success, but the least Hinkie owes is an occasional update when the club reaches certain mile markers.

More than just the fans, he owes that much to his coaching staff and team who are in a daily battle to explain the team’s status.

There are nights the 617 area-code combination of MCW and Nerlens Noel looks like it could be a big part of future successes, but there are certainly others when Noel doesn’t appear to have any sort of offensive game that would make him a force in the NBA.

The only thing we really know about Joel Embiid is that left on his own, he has an appetite like a Labrador retriever and might eat his way to 300 pounds. But given the right guidance we hope he can truly become a player of huge impact.

Philadelphia is an impatient city, but it is not a city without sports savvy and that is why the Sixers have been afforded something most other professional teams in the city never experience – a very long time frame to improve with no shouting for heads to roll.

The suggestion here is that the Sixers under Hinkie have taken the correct route to try and establish a franchise with long-term success. They are determined not to forever reside in Middle Earth, but there is no reason there can’t be just a bit more communication along the way.

Mind you, not the baloney and happy talk so many general managers try to spin off as insight, just the occasional answer as to why roster moves are made, and how those moves fit into the long-term picture.

Sam Hinkie might have a plan, but he doesn’t have the NBA or basketball pedigree to simply expect that he should be trusted as an architect because he says he is an architect. At some point, you come out with the blueprint in had and show there you stand in the project. Otherwise, you can fully understand why there are some concerns that the whole project will fail.

It might not be good to be a hobbit, but it’s even worse to be a hermit.