Catch these fries for a limited time at Reading Terminal Market 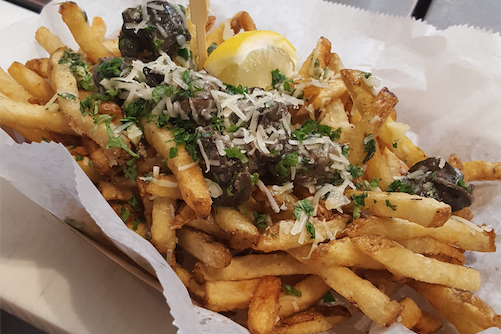 Honoring the late Anthony Bourdain’s birthday on June 25, Fox & Son Fancy Corn Dogs are offering “Bourdain Fries" as a special. One hundred percent of proceeds goes to the American Foundation for Suicide Prevention.

The fries consist of escargot, Pernod, and butter, while shredded American Grana is added on top. It comes with a little lemon on the side to add a hint of acidity to the dish.

“We were trying to do something his style. It just seemed like something that would represent him well.”

Found in the heart of the Reading Terminal Market, Foxman and co-owner Kevin Kwan, both went to the Culinary Institute of America, the same school as Bourdain, says Foxman.

“We just feel a special connection to him.”

Bourdain’s death on June 8 was a shock to many and a great tragedy to all who loved and appreciated his work. His impact on the food industry changed the way many perceived food. He was a strong force in the culinary world who shed a light not only on the creative in cooking, but the meaning of home cooking.

These buttery and lemony cooked-just-right fries will be available until Sunday, but keep an eye on their social media as they may extend it into next week.