On his 'The Layover' show in 2012, Bourdain criss-crossed Philadelphia and ate and drank with the city's top chefs 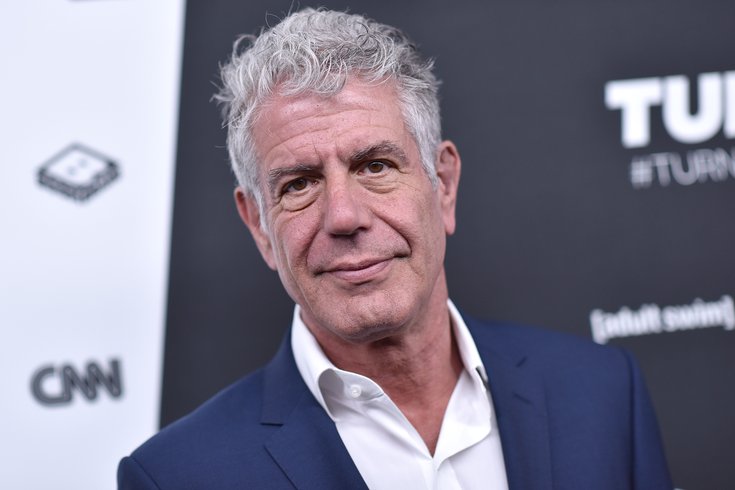 When Anthony Bourdain died on June 8, he was remembered for many distinct things. His popular travel shows, like “No Reservations” on the Travel Channel and “Parts Unknown” on CNN provided a compelling way of looking at the world well beyond food, while his celebrated 2000 memoir, Kitchen Confidential is significantly appreciated by foodies and writers, alike. Bourdain was also recognized for his late-in-life advocacy for the #metoo movement, while his suicide opened a lot of eyes to the ways depression can afflict even those who appear to lead exciting, fulfilling lives.

Bourdain, on his CNN show in 2015, famously proclaimed the cheesesteak at Donkey’s Place in Camden the best in the region. But it was another visit by Bourdain to the Philadelphia area, which aired on his Travel Channel show, “The Layover” in December 2012, that was perhaps even more memorable. That was the show when Bourdain exposed Philadelphia’s then-newly-burgeoning restaurant scene to a national audience – and showed that he “got” Philly much more than most outside media visitors typically had.

“The Layover” was a show Bourdain hosted for two seasons on the Travel Channel. It typically entailed Bourdain visiting less exotic locations than he did for “No Reservations” – the majority of episodes were shot in American cities – and the gimmick was that each episode showed everything a visitor like Bourdain could typically do in town in a 24- to 48-hour period.

“My relationship with Philadelphia has always been complex,” Bourdain, who was born in New York City and lived there for much of his life, said at the beginning of the Philly episode.

More than once on the show, he mentioned that he hadn’t ever done a show in Philadelphia before, which led Philadelphians at his book tour appearances to ask him, sometimes in expletive-laden tones, why exactly that was. (You can watch the full 44-minute episode here.)

He added that from a culinary standpoint, Philly had long been a “two-horse restaurant town,” between Georges Perrier’s Le Bec-Fin, and Stephen Starr’s large stable of eateries. But by the time of Bourdain’s visit in 2012, the city’s restaurant reputation was starting to improve, with the rise of the likes of Marc Vetri, Michael Solomonov,  Peter McAndrews and Han Chiang. "The Layover” provided something of a nationally televised benediction for this generation of chefs.

All four of them appear on the episode, and in a clever twist, Bourdain didn’t just eat with them at their own restaurants – he ate at Pho 75 with Solomonov, chowed at Amis with McAndrews, threw a few back with Han at Dirty Frank’s, and  drank with Vetri and Solomonov at the Pen & Pencil Club, where Bourdain famously slugged a shot of hot dog water after losing a game of Rock, Paper, Scissors to the two chefs.

In his two days in town, Bourdain appeared to eat at least a dozen meals, including a visit to Paesanos in South Philly, where he ordered four sandwiches. One of Bourdain’s more underrated talents was his ability to remain in trim shape despite spending several years eating, literally, all of the food in the world.

On the visit, Bourdain stayed at the Four Seasons, and his tour also took him to such notable non-food places as the Mutter Museum and the Barnes Foundation. He took the Grim Philly tour and engaged the guide in a surprisingly lengthy discussion about the personal grooming habits of 18th century sex workers, before asking whether anyone has ever engaged in sexual intercourse under the Liberty Bell.

While he had promised to get through the hour without talking about the cliche topics of cheesesteaks or “Rocky,” Bourdain at one point floated the idea of knocking down the Rocky statue and replacing it with one of native son Joe Frazier. Rocky, of course, still stands, but the city did indeed dedicate a statue of the nonfictional heavyweight champ Frazier in 2015, three years after "The Layover” episode.

Most of it rang true, but not all did. At one point, Bourdain called Center City “City Center,” and praised SEPTA as “pretty decent.” And in showing what a difference a couple of years can make, a discussion of the most recognizable local celebrities goes on, for minutes, about Bill Cosby.

Bourdain had another, rather indirect Philly connection: When Fox produced a sitcom in 2005 that was loosely adapted from his book, Kitchen Confidential, the Bourdain character was played by none other than Jenkintown’s own Bradley Cooper. The show was cancelled quickly, in part because it came along years before Cooper or Bourdain were as famous as they would eventually become.

With that episode, Bourdain undid whatever ill will he did when he neglected to visit Philly up until that point, and his death was mourned as much here as anywhere else. After all, when asked on "The Layover” episode his favorite thing about Philly, his answer was clear: “The attitude.”