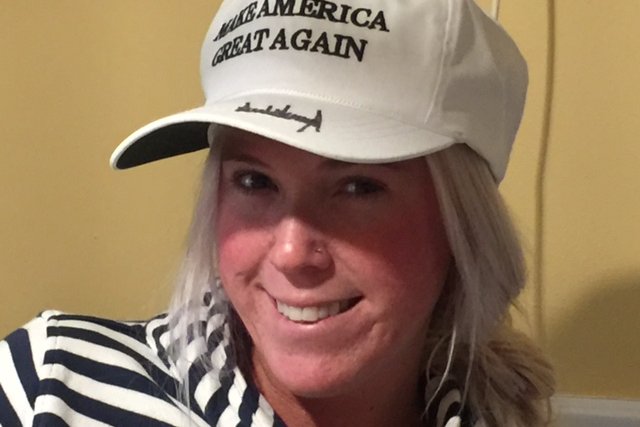 Collingswood resident Lauren Boisvert has had some issues, especially repeated vandalism, while showing her support for President Donald Trump. The hat she's wearing was signed by Trump at a campaign rally in Delaware.

Collingswood resident Lauren Boisvert’s been a target of vandalism and harassment – again and again and again – and she knows why: her unabashedly enthusiastic and visible support of Donald Trump.

Her front lawn, lit with floodlights to cut down on trespassers, has flags, banners and signs. They are targeted by vandals – and the catalyst for harassment.

She says nearly 20 separate incidents have occurred on her quiet residential street in the past year as Trump progressed from unlikely candidate to even more unlikely president.

Boisvert ticked off the incidents during an interview last Friday: Her car, with plenty of Trump support visible, got keyed. Trump banners were repeatedly stolen, maybe a dozen times, until finally secured with luggage locks. An American flag was ripped down August 3, tossed to the ground. Dog poop got dumped on the lawn in front of the sign which read "God bless America, God bless Trump." Multiple times. People screamed at her that she is either a racist or anti-Muslim, or both, which she says is untrue. Epithets were shouted, mostly in the dark of night, followed by a screech of tires.

There was even a threat to burn her home down.

The vandalism and harassment became so frequent at one point that local police loaned the sisters a surveillance video camera.

The camera captured the rocks thrown at the home Boisvert and her sister rent in Collingswood, a South Jersey community they both love.

A 12-year-old boy – one of six around the same age in the rock-throwing group – was arrested as a result, she said, after he was identified from surveillance video.

“We love Collingswood, Haddon Avenue, the restaurants. I don’t understand it. I’m one of the kindest people I know,” she said of what she has come to think of as Collingswood's “liberal hate.”

“So much for the tolerant left, right?” she said of the borough's reputation as a liberal and unprejudiced town.

“The only hate I’ve ever received is from liberals,” she added. 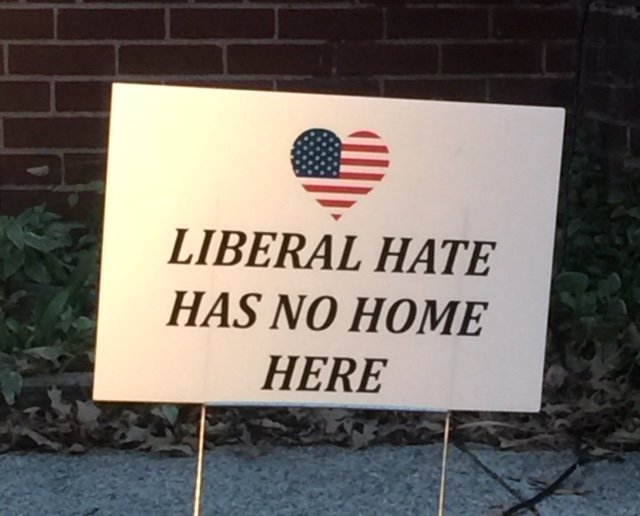 Frustrated by repeated vandalism apparently sparked by her display of support for President Donald Trump, Collingswood resident Lauren Boisvert has fashioned a poster riffing on the HateHasNoHome lawn signs which dot her community.

Peeved and frustrated by the ongoing harassment, she made a new poster about two weeks ago.

The sign, with a heart logo in red, white and blue colors, reads ”LIBERAL HATE HAS NO HOME HERE,” an obvious takeoff on the "Hate Has No Home Here" lawn signs, which began in a Chicago neighborhood and spread across the region, including many Collingswood lawns.

Carmen Rodriguez, a spokeswoman for the founding Hate Has No Home group in Chicago, said her group is not meant to have any political connotations.

“We believe our message is universal, and should be one every American can support. The project is non-partisan, non-sectarian, and is not affiliated with any party, religion, campaign or candidate,” she said.

“It was just for Trump. We liked the idea of someone new, not a politician, someone with fresh ideas.” – Collingswood resident Lauren Boisvert, on showing her support

She offered to get Boisvert one of the original signs to display alongside her improvised sign. Boisvert is taking her up on the offer.

As Boisvert stood on her front lawn Friday talking to a PhillyVoice reporter, an SUV slowed, stopped and the window slid down.

But instead of a jeer, Boisvert was cheered on for her overt display of Trump love.

“It happens about once a week. There are definitely closet Trump-lovers around town,” she said, thanking the driver.

Boisvert, who went to the Trump inaugural and related festivities with her sister – they cried happily when Trump was declared president – said the month after the election was the worst.

And while vandalism and harassment continue, “Now I get a thumb-up more often than not.” 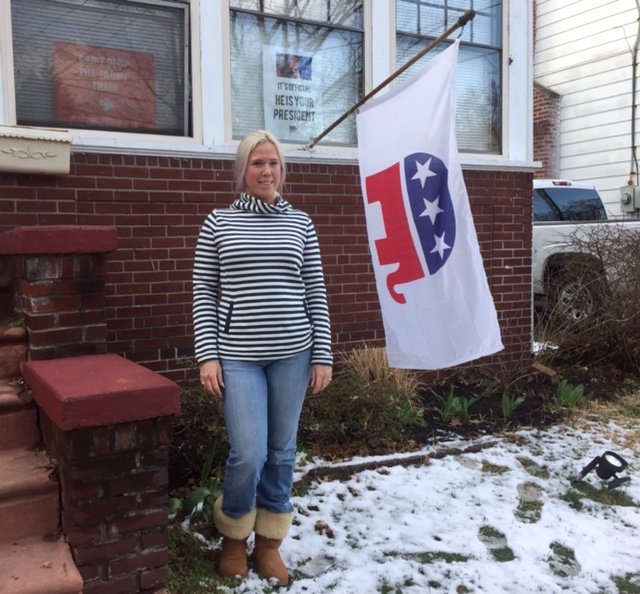 Collingswood resident Lauren Boisvert has had some issues, especially repeated vandalism, while showing her support of President Donald Trump. She finds the reaction, including keying her car and throwing stones at her house in the decidedly liberal-leaning community she loves troubling.

Collingswood Mayor Jim Maley, a Democrat with public safety oversight in the borough, sent an emailed statement to PhillyVoice about the incidents: “Regardless of your political views, no one should ever feel like their home or property isn't safe. That's unacceptable and our police have done their best to help find the offenders.”

Maley contended the targeting of Boisvert is out of character for the community.

“One of the best things about Collingswood is its small-town neighborliness and neighbors share a spectrum of beliefs," he wrote. "For every unfortunate report of vandalism we receive there are hundreds of untold acts of caring and generosity in town – it's what makes Collingswood special.

“But when matters escalate, we are committed to making sure no one feels targeted and issues are handled by the police,” his statement concluded.

Collingswood Police Chief Kevin Carey did not immediately respond to requests for comment on Monday. 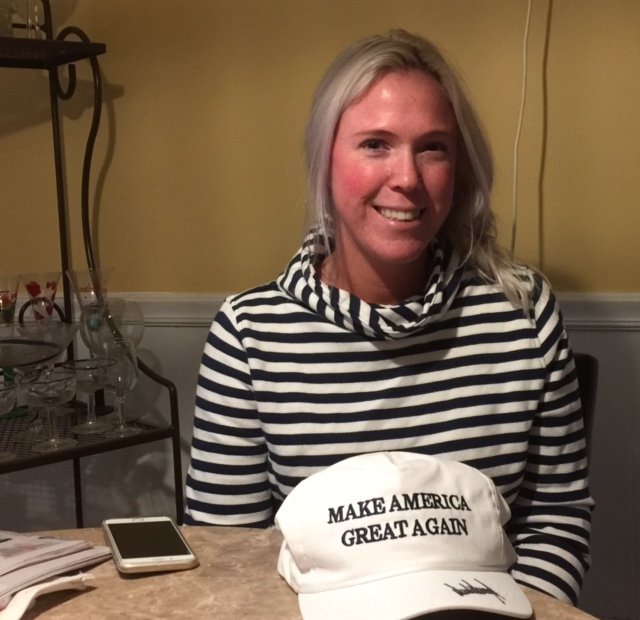 Collingswood resident Lauren Boisvert has had some issues, especially repeated vandalism, while showing her support of President Donald Trump. The hat in front of her was signed by Trump at a rally in Delaware while he was still a candidate. She copied the signature for a tattoo on her foot.

FROM LIBERAL TO TRUMP TATTOO

Boisvert, 29, grew up in a “very liberal household” in South Jersey’s Mount Laurel.

An accountant with a master’s degree, she says she twice voted for Barack Obama, mostly because of her father’s support of the 44th president, even though she was registered Independent, not Democrat.

But last year, she registered as a Republican – but not for the party, simply to support Trump.

Speaking for her sister, she explained their support, “It was just for Trump. We liked the idea of someone new, not a politician, someone with fresh ideas,” adding she even likes Trump’s frequently caricatured hair.

For Boisvert, her greatest disappointment with the young Trump administration is its failure to adequately vet those it wanted to serve in high positions, such as former National Security Adviser Michael Flynn, who worked for the government of Turkey while also advising Trump as a candidate. She said that failure undermines Trump’s repeated call for “extreme vetting” of would-be immigrants. 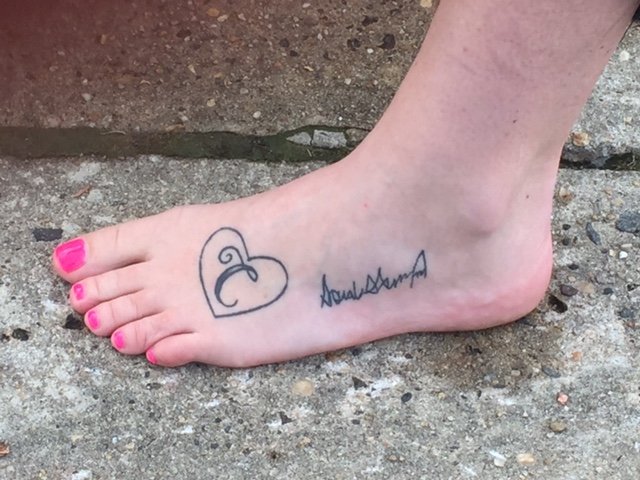 Lauren Boisvert had a copy of Donald Trump's signature tattooed on one foot. She copied his signature from a hat he signed for her at a rally.

Otherwise, she’s still all in for Trump, right down to a tattoo of his signature on her left foot.

“Oh, yeah, it is staying up," she said of the Trump yard display, "For eight years,” she added, as she looked ahead.

She’s learned not to discuss her love of Trump when she visits local bars, “but otherwise, I talk about it everywhere.”

“I don’t talk about it with my boyfriend," she allowed. "He’s anti-Trump.”