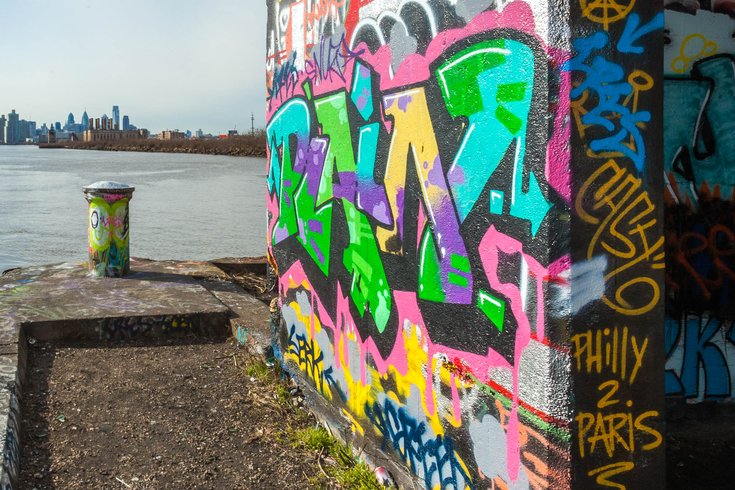 The end of Pier 18, also known as Graffiti Pier, with the Philadelphia skyline in the background.

Read More
This is the first of a two-part series.

Darryl “Cornbread” McCray, the Brewerytown man often credited with sparking the modern graffiti scene as a teen in the late 1960s, once burnished his reputation by tagging an elephant at the Philadelphia Zoo.

While the story grew legendary, today it would have gone viral, delivered via social media to thousands only remotely connected to Philadelphia’s deep-rooted graffiti scene.

Social media, particularly Instagram, offers graffiti writers a new tool to build their stature in an insular community that places the utmost importance on reputation. But it's likely contributing to a resurgence in the amount of graffiti seen throughout Philadelphia.

“It has, for sure,” said Joe Schaefer, founder of graffPHL, a set of social media websites dedicated to documenting the Philadelphia graffiti scene. “You see it more often. You don’t have to go out into the hood of North Philly to see these writers. You can sit in your living room and scroll through your phone. People say, ‘I can get a can and start doing that.’”

Just like Cornbread did in his time, present-day graffiti writers still seek the most prominent, visible and outlandish locations to showcase their work. Perhaps nothing displays this better than the giant, bright yellow piece painted by writers Distort, Texas and Gane along the rail lines across from Boathouse Row.

That location – easily viewed by passing trains and motorists along the Schuylkill Expressway – has long been considered one of the most spectacular places to mark in Philadelphia.

But social media offers an even larger audience to graffiti writers who tag inferior locations while also preserving a piece beyond its physical life. The city’s anti-graffiti cleaners, or "buffers" in the lexicon, may immediately remove a piece, but social media enables its survival online for anyone to see.

Schaefer, who has shadowed some 25 graffiti writers as part of a documentary he is filming, regularly highlights Philly’s graffiti scene on his graffPHL Instagram account, one of several Philly graffiti-centric accounts. Others include 215graff and phillygraffchannel, which boasts more than 14,500 followers.

“Graffiti writers are all about their reputations,” Schaefer said. “All graffiti writers embrace it because it’s a chance to have your stuff posted.”

But Thomas Conway, deputy managing director of the city’s Anti-Graffiti Network, doubts social media has much to do with increased graffiti in Philadelphia.

“I think graffiti goes in spikes,” Conway said. “It increases over the years and then it will go in a decline. Right now, we’re probably in an upswing in regard to graffiti vandalism.” 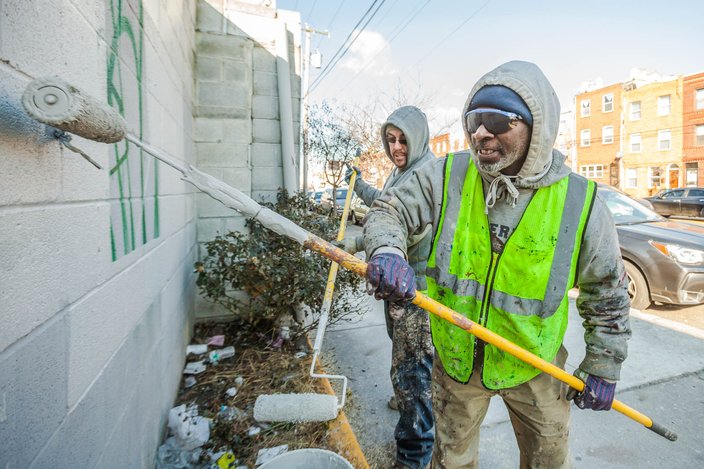 Jonathan Heard, right, and Tim Farnon, employees of Philadelphia's Anti-Graffiti Network paint over graffiti tags at the corner of Sixth and Washington streets.

GRAFFITI BY THE NUMBERS

Philadelphia is far from the graffiti-saturated city it was in the 1980s, when Mayor Wilson Goode launched the Anti-Graffiti Network to eradicate a problem that many people linked to impoverished neighborhoods and increased crime.

Yet, graffiti remains a fact of Philadelphia life despite constant abatement efforts that, at one point, included a police squad dedicated to investigating and arresting writers.

Both the city’s abatement program and those who study graffiti say it appears to be surging again in Philadelphia in recent years.

There is no direct way to measure the popularity of graffiti, or even the amount of graffiti being sprayed across the city. But Philly311 and police data help paint a broad, if somewhat fuzzy, picture.

Supported by a $1.3 million operating budget, the Anti-Graffiti Network employs 11 abatement crews – two members in each – to power wash or repaint property vandalized by graffiti writers. Sometimes, graffiti must be cleared from the same property several times before writers leave it alone.

Still, all of those totals dwarfed the figures from 2011 and 2012, which tallied a combined 7,170 requests. But those years preceded the launch of Philly311’s mobile app, which facilitated the request process.

Exactly how much Instagram has factored into those numbers is difficult to ascertain beyond anecdotal evidence. But just as social media is now integrated into mainstream life, its impact among the graffiti subculture is being felt.

Not only does it provide writers with greater exposure, but Schaefer said it also influences spot selection, for better or worse. Rather than hitting an underpass along a busy bus route, a writer instead might seek a safer or more picturesque location, hoping the image will spread across social media.

“It kind of takes the true form of graffiti out of it,” Schaefer said. “You’re supposed to be risking something.” 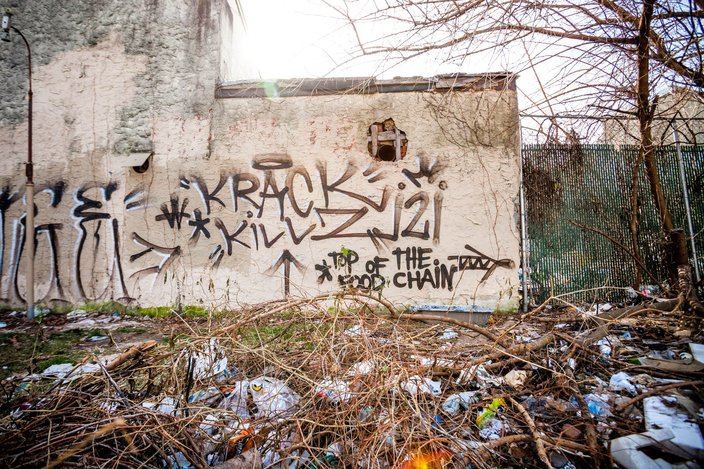 Graffiti, shown on the side of a building at Third Street and Cecil B. Moore Avenue once saturated the city. But Philadelphia's Anti-Graffiti Network clears more than 100,000 pieces each year.

'IT'S NOT GOING AWAY'

Schaefer also wondered whether Instagram prompts novice writers to tag the streets without perfecting their handstyles, leading to an inundation of poor graffiti. That’s a longstanding graffiti foul that predates social media, but might be manifesting itself in a new way.

“If you see a really well done piece of graffiti, that (form) has taken someone five to 10 years to figure out,” said Conrad Benner, who documents Philly graffiti on his "Streets Dept" blog. “It’s a long process for someone to get control of the can. It’s definitely not something that you could Instagram a photo of and buy a can of spray paint and figure out. It takes years.”

For some graffiti lovers, viewing it on Instagram does not provoke the same response as stumbling across it in the neighborhood.

Lindsay Bates, an architect who examined the cultural heritage of graffiti for her master’s thesis at the University of Pennsylvania, said she enjoys the “element of surprise and delight” when she spots a new graffiti piece. But Instagram strips that experience away.

“There was a time when style meant you were from a specific city. That’s what you saw, so that’s how you wrote graffiti. That’s clearly not the case any more.” – Tyson Mitman, Drexel University adjunct professor

“Graffiti and street art are so site-specific in a lot of ways,” Bates said. “It’s all about the interaction between the piece and its site and where it sits in the environment.”

Photos, however, have long been a part of the graffiti subculture. Graffiti writers previously swapped pictures like children trading baseball cards, said Tyson Mitman, a Drexel University adjunct professor who edits "The Infamous," a graffiti magazine.

“For a long time, people just had shoeboxes of their own graffiti and pictures of graffiti that they thought was cool,” Mitman said. “The only way it moved from city to city was when writers would trade pictures.”

The Internet changed that. Now, a Philly graffiti writer can instantly observe graffiti styles being written anywhere in the world.

“There was a time when style meant you were from a specific city,” Mitman said. “That’s what you saw, so that’s how you wrote graffiti. That’s clearly not the case any more.”

Philly writers developed a handstyle known as a wicked, or wicket. To a casual observer, a wicked is an indecipherable, spidery tag written in a single color. But to a Philly graffiti writer, it’s a legible name.

Those names continue to be sprayed in neighborhoods across the city. And the city continues to clear them. It’s an endless battle that began decades ago and seems destined to persist, perhaps partly fueled by social media.

“It’s still a pretty big cultural phenomenon in the city,” Mitman said. “And it’s not going away.”