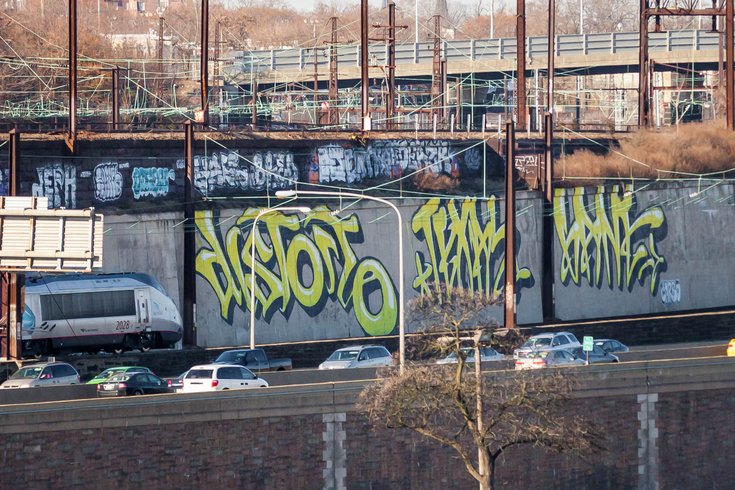 Distort, Texas and Gane tags tower over the Schuylkill Expressway near Boathouse Row in Philadelphia.

Read More
This is the last of a two-part series.

Driving along the Schuylkill Expressway, it is nearly impossible to miss the giant, bright yellow graffiti painted along the Amtrak rail lines just north of 30th Street Station.

People dining at the Waterworks Restaurant or wandering around the back of the Philadelphia Museum of Art easily can decipher the names Distort, Texas and Gane on the concrete wall. A half mile away, motorists crossing the Girard Avenue bridge can make out the lettering.

Unsurprisingly, the wall has long been considered a prime location for Philadelphia graffiti writers looking to either boost or cement their reputations. Texas and Gane have marked it at least three times, each time with a different third writer. Their persistence has defied the city's efforts to keep the wall graffiti-free.

“It has a lot of visibility,” said Tyson Mitman, a Drexel University adjunct professor who edits the graffiti magazine The Infamous. “People really like to get those spots. Their name stands out and people get to know them really quickly.”

Painting the wall would seem to require trespassing on Amtrak property, where trains run through the night, and avoiding the cars zooming by on the adjacent highway. And the most expansive, two-color piece by Distort, Gane and Texas reportedly took two nights.

“It’s like, holy crap,” graffPHL founder Joe Schaefer said. “Obviously, it wasn’t finished. To go back the very next night to finish it – it’s ballsy. It’s crazy how they didn’t get caught.”

While social media enables graffiti writers to build reputations by tagging far safer sites, Texas and Gane have gained stature for painting large roller pieces in some of the most unique and dangerous locations in Philadelphia and New York City.

“Even artists think, ‘How did they pull it off?’” said Schaefer, who has shadowed about 25 writers as part of a documentary he is filming. “How are they that good with rollers?” 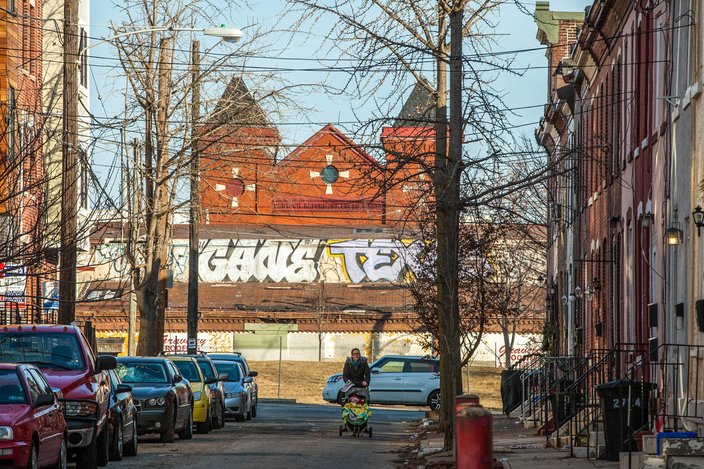 Game and Texas are known for painting roller art pieces on difficult sites like the side of a building bordering The Christian Hope Baptist Church in Brewerytown.

Gane and Texas have been at the forefront of that evolution, Mitman said. He remains impressed by their ability to paint handstyles on intricate pieces on such a large scale – all while avoiding detection.

"I'm blown away every time I see those things," Mitman said. "I can't imagine the amount of time, precision and practice it must take."

Exactly how Texas and Gane complete their work, the amount of paint needed and the time required remain a mystery to outsiders.

People with ties to the graffiti community surely have heard of them, but no one interviewed by PhillyVoice professes to know their identities. But rumors swirled.

Several sources had heard the pair was a couple from the Philly region. One person thought the writers might have started in New York before coming to Philly. Another had heard one of the writers had broken a leg, forcing them to scale back their work.

Their work is prominent, even as they remain a mystery.

"That's what's fun about it, too," said a former graffiti writer, who requested anonymity because of his ties to the subculture. "You hear stories and whispers of who is who and what's what. I don't know them at all."

Nevertheless, Gane and Texas leave their marks across Philadelphia for people to love or loathe.

To the city’s Anti-Graffiti Network, which employs 11 crews to handle daily graffiti removal, their work along the Amtrak lines is a poke in the eye to the city's abatement efforts.

Clearing graffiti along the train lines is no small task. It requires Amtrak to temporarily close the rail lines while anti-graffiti workers climb into a scissor lift.

Because of these extensive measures, the Anti-Graffiti Network only cleans the area every few months, Deputy Managing Director Thomas Conway said. The network last removed graffiti from the wall shortly before Pope Francis visited in late September. It will be cleared again sometime in the spring, but the wait is not ideal.

“That can be frustrating,” Conway said. “We don’t have easy access to get right back there and clean it up. Our biggest deterrent is to quickly remove it.”

Surely that is part of the wall's appeal to Texas and Gane. 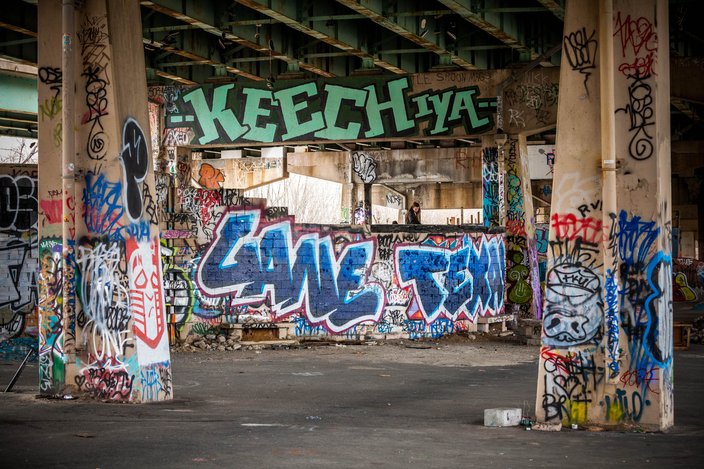 A graffiti roller piece by Gane and Texas adorns a wall at FDR Skate Park in South Philadelphia.

Conway expressed frustration that the graffiti writers put themselves in considerable danger to commit a “silly” crime. But he recognizes that’s the name of their game.

“That’s kind of why they do it – for the recognition,” Conway said. “Basically, the more dangerous the location, the more respect you get among the graffiti vandals.”

That Gane and Texas can use rollers to paint such precise graffiti in extreme locations has helped build them a strong following, including Conrad Benner, an urban art enthusiast who chronicles Philly graffiti on his "Streets Dept" blog.

“I think it’s a combination of their tested handstyles and the fact that they are very smart and very thoughtful about where they put their work,” Benner said. “The environment around it is just as important when you engage with a piece as the thing you’re actually putting up. When any artist is really thoughtful about the space, it makes it that much more notable.”

The most prominent place for Philadelphians to see their work remains along the Schuylkill Expressway – with nearly 170,000 vehicles passing by on average daily – at least until the Anti-Graffiti Network clears it. Maybe then Gane and Texas will attempt their feat again. If not, someone else likely will.

“It’s one of those things the city is going to have to battle,” Mitman said. “It’s just too good a spot.”