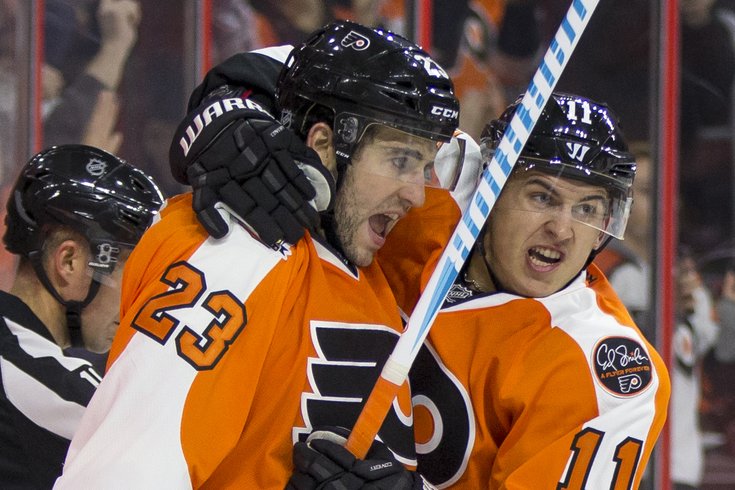 The Flyers came into Saturday night’s game struggling a bit, with three losses and only one point to show for their last three games.

They got back to their winning ways, defeating the Carolina Hurricanes 6-3 in an entertaining game at Wells Fargo Center. Here’s what I saw:

•    Jake Voracek took this one over. There doesn’t appear to be any slow start this season for the Flyers right winger. He came up with two goals and an assist, and he really drove play with his second line as soon as the Orange and Black fell into a 2-0 hole.

•    The second period was a goal bonanza. After a pretty sleepy first 20 minutes of play, the Flyers and Canes combined for a seven spot in the second period. Carolina opened it up with two goals (power-play tally, sharp passing play), and the Flyers responded with four of their own, punctuated by Shayne Gostisbehere’s perfectly placed wrister.

•    Matt Read’s magical start continues. We wrote about Read the other day, and he is now tied for the NHL lead with some guys named Auston Matthews, Connor McDavid, and Richard Panik with five goals. The veteran was even playing a bit on the second line at the end of the game.

Matt Read is now tied for the NHL lead in goals scored... pic.twitter.com/av1t64YD0E

•    Ivan Provorov got back on track. Now paired up with Brandon Manning, the rookie blueliner played his best game as a Flyer. He picked up a couple of key assists (one on a rocket from the point that got deflected by Voracek) to get the Orange and Black out of that 2-0 hole.

It wasn’t just the plays that show up on the scoresheet with Provorov, either. His beautiful flip pass that sprung Read in the third period led to a penalty, which led to a goal. Those little things can make a huge difference.

•    The power play got back on track, too. After the 1-7 performance against Anaheim in the home opener, the Flyers definitely worked on the man advantage over the last few days. They only went 1-4 on the PP, but in general, the Flyers appeared much more dangerous. Wayne Simmonds’ third-period goal that gave the Flyers a two-goal lead was the product of them knocking on the door for the entire game.