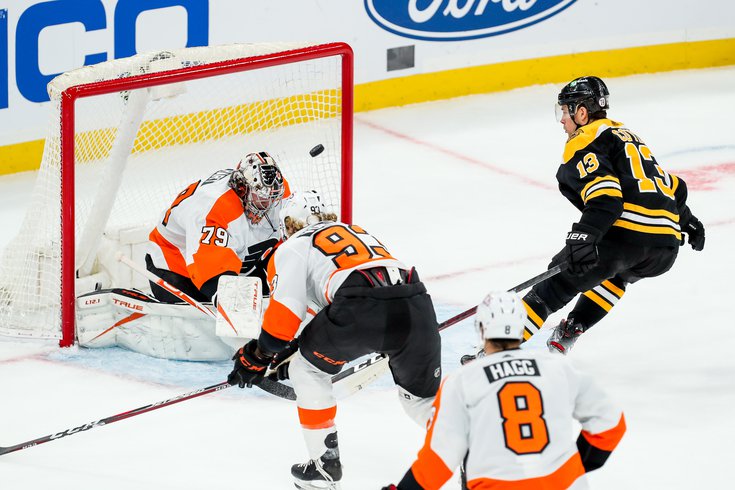 The Flyers dropped their second straight Saturday in Boston.

After peaking and looking like contenders with wins in three of their first four games to start the 2021 season, Philadelphia has taken steps back in their last two, falling to 3-2-1 through six games and leaving many worried about a variety of things as the Flyers lick their wounds and head to Jersey.

It's still early, and it would be silly to simply throw away all the really good things Philadelphia has done this season because of a few recent missteps. Still, one can only hope they figure their sh** out before this season goes south. Here's the good, bad and ugly from Saturday's one-sided battle:

• The Flyers continue to impress by never backing down and rarely losing steam. In the second, after a very bad first period, an incredible save off a flailing blocker from Hart (see the next clip below) created an opportunity for Jake Voracek going the other way. The winger fired a snap shot from the right side and a tip from Hayes sent it under Jaroslav Halak.

The give and go is simple, but it works.

• Hart's overall numbers this season haven't been impressive but the eye test shows he still has the ability to be every bit as good in 2021 as he was in the bubble last summer. Facing what is routinely a ton of shots in front of the Philly net (again, more on that in a bit), Hart has made some really incredible saves, with most of his goals allowed falling under the category of bad luck, or bad team defense.

In all, the 22-year-old turned away 20 Bruins shots Saturday, including this gem:

Maybe the Flyers should only roll with Hart when they're in Philly?

Carter Hart will fall to 4-12-1 on the road since last season. At home, he’s a different goalie. #Flyers

Sorry Flyers' fans, not much else to rave about.

• A bad early penalty taken by Mark Friedman and a lost faceoff to start a power play led to a flurry of activity in front of the net and a rebound goal by Patrice Bergeron to get the Bruins ahead 1-0 in the first. The penalty kill has become a problem in this young season, as Philly has allowed a goal in five of six games when down a man, and one has to wonder if this is due to the injuries to Sean Couturier and Phil Myers, or if it is a deeper issue.

Or, it could be due to this being just the sixth game of the season after a nine-day long training camp followed by no preseason games. It's still super early and every team, not just the Flyers, is trying to figure things out.

• Not long after Hayes' equalizer, the Flyers defense didn't do much to help Hart on an ensuing Bruins rush. He had no one to get a stick on a puck sliding alongside a wide open net, and Craig Smith had no resistance to give Boston its second lead. More often than not this season, it seems like the Flyers are being punished for lapses in defensive positioning or decision-making, which makes it a lot more difficult for Hart to do his job between the pipes.

A second bad luck deflection led to another goal — this one by Charlie Coyle — for the Bruins and a 3-1 lead late in the second.

Hart would go on to allow his fourth goal for the third straight game, after yet another impressive display of passing in front of the net set up Brad Marchand. The marker, which came after yet another forecheck from the Bruins created a Flyers turnover, all but assured their victory in Game 2 of the two game set.

Hart's fifth came on a power play goal by Marchand later in the third, and a sixth goal came after that, with Hart fighting through to finish the game.

• One of the byproducts of being as bad against the forecheck as the Flyers have been this season, and of them being stuck defending more than attacking — as their immense discrepancy in shots on goal for and against demonstrates — is that they resort to icing the puck more than most teams. According to morehockeystats.com, the Flyers through their first five games iced the puck a total of 24 times, tied for third most in the league. Of those 24, the statistics suggest that about 30% of those times it led to a bad result (like a goal, penalty or another icing call) — the ninth worst in the NHL.

It's certainly a trend that winning team would like to avoid and perhaps if they find their footing in the offensive zone again sometime soon, more shots fired on goal will lead to less desperation on long defensive shifts.

• It seems apparent that the Flyers' well-documented issues with generating shots on goal isn't going anywhere anytime soon. After being out-shot in every one of their first five games by an average of 12 shots on goal per game (and still somehow going 3-1-1), the Flyers were anemic with the puck yet again, surrendering 10 shots in the first period and mustering just four of their own. They had just 17 shots on net in total when the full 60 minutes were over.

Through six hockey games, the Flyers have now been out-shot 213-142 in total. Now that's ugly.

He’s given up 14 goals over his last 3 games
pic.twitter.com/lZc27UsyWV